Home The Washington Diplomat May 2012 Despite Reforms, Human Rights Body At U.N. Still Struggles With Credibility 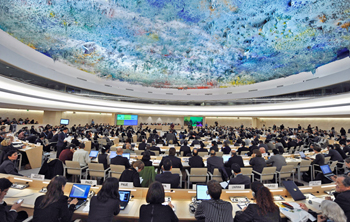 When a leading U.S. civil rights group first began fighting segregation a century ago, it took to America’s streets and courts. A hundred years later, it is voicing its outrage over U.S. voting laws on a global level.

In a surprise move in March, officials from the National Association for the Advancement of Colored People (NAACP) took their grievances about issues such as revised voter ID requirements for Americans to the United Nations Human Rights Council in Geneva.

There, they called for a review of the current situation at U.S. polls, urging for the results to be made public so that “voter suppression” tactics aren’t replicated elsewhere, according to Hilary Shelton, director of the NAACP’s Washington bureau.

The trans-Atlantic trip places renewed focus on an international institution with a tumultuous past and present — and a tempestuous relationship with the U.S. government.

The U.N. Human Rights Council holds a special session in Geneva on the situation in the “occupied Palestinian territory and East Jerusalem” in 2009. Despite recent reforms, the council is still criticized for focusing too heavily on the Israeli-Palestinian conflict.

Experts are split in their assessments of the 47-member panel, created in 2006 to replace the Human Rights Commission that former U.N. Secretary-General Kofi Annan famously accused of casting a shadow on the reputation of the entire United Nations system by being politicized and selective.

Elected by the U.N. General Assembly, the Human Rights Council is intended to strengthen the protection of human rights around the world and to make recommendations on instances where they are violated. It has no enforcement power. Among other things, it reviews the human rights records of all U.N. member states every four years. Experts and groups also work on topics ranging from the sale of children to arbitrary detention. In addition, it looks into human rights violations in specific countries.

It’s an ambitious agenda — and a matter of debate whether the council is up to the task.

Some observers say U.S. participation coupled with recent actions on human rights abuses in Syria, Libya, Sudan and Sri Lanka have helped boost the council’s credibility since its early days — especially under the outspoken tenure of Navi Pillay, the U.N. high commissioner for human rights. Others claim it still unfairly and disproportionately singles out Israel and offers a platform for the propaganda of repressive regimes.

A key point of contention is the council’s membership, which currently includes a majority of countries — such as China, Cuba, Russia and Saudi Arabia, the only nation left where women still can’t drive — deemed “not free” or “partly free” by the advocacy group Freedom House.

Seats are divvied up on a regional basis. African and Asian countries receive 13 each while Latin America and the Caribbean get eight. Western Europe and other states, meanwhile, receive seven seats while Eastern Europe gets six. States can serve for two consecutive three-year terms in one go but need to seek re-election after the first term. At times, countries run unopposed in their regional groupings.

Six years after its inception, Annan, for one, sees progress but adds that the council has not always lived up to its potential. In an opinion piece published in the Christian Science Monitor in December, he urged countries not to jump ship due to criticism.

“If we let the U.N. Human Rights Council fail, which will surely happen if democratic states weaken their commitment and engagement with it, we leave the field free to tyrants to call the shots,” Annan wrote. “This is still a work in progress, but there is no greater cause.”

One prominent player that emphasizes this approach is the United States, which won a seat in 2009 and is seeking a second term in a reversal of policy from the previous administration. Under President George W. Bush, Washington was one of four countries to vote against the Human Rights Council’s creation and stated in June 2008 that it would engage with it “only in matters of deep national interest,” essentially boycotting the panel.

The tension may have dated back to the spring of 2001 when the United States was voted off the council’s predecessor, the Human Rights Commission. The Bush administration also regularly took heat from member nations for launching the war in Iraq and for alleged torture against detainees but dismissed the criticism, saying the United States shouldn’t be chided by hypocritical human rights abusers such as Iran and Cuba.

But President Barack Obama took a different tack and rejoined the body, arguing that the best way to reform it was from within.

“The United Nations does extraordinary good around the world — feeding the hungry, caring for the sick, mending places that have been broken,” Obama said in 2009. “But it also struggles to enforce its will, and to live up to the ideals of its founding. I believe that those imperfections are not a reason to walk away from this institution — they are a calling to redouble our efforts.”

Today, Washington says it recognizes the council as a “work in progress” and is vocal in its criticism when warranted. “U.S. engagement has reshaped the council’s agenda, making it a stronger, more effective institution by addressing urgent human rights situations and focusing international attention on some of the world’s most egregious human rights abusers,” a State Department official said.

The United States, among other things, claims its participation has led to council commissions of inquiry on Syria and Libya.

The General Assembly temporarily suspended Libya from the council between March 1 and Nov. 18, 2011, in light of the fierce repression of an uprising that led to the toppling of longtime dictator Col. Muammar Qaddafi. In Syria, the government has been embroiled in a conflict with protesters calling for the fall of President Bashar al-Assad. The United Nations estimates that more than 9,000 people have been killed in the fighting there. Last year, a council-appointed commission issued a report saying gross violations of human rights had been committed by Syrian military and security forces since the beginning of the protests in March that could constitute crimes against humanity. 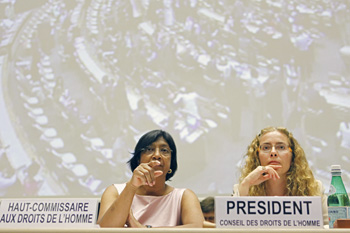 U.N. High Commissioner for Human Rights Navi Pillay, left, and President of the Human Rights Council Laura Dupuy attend the council’s special session on the situation in Syria. Pillay has been outspoken in calling out abuses in Syria, Libya, Sri Lanka and other hotspots.

In playing up its role on the council, Washington also points to the creation of a special investigator (“rapporteur”) on human rights in Iran, as well as the implementation of a resolution targeting religious intolerance. In addition, it draws attention to what it calls the first-ever U.N. resolution on the human rights of lesbians, gays and individuals who identify themselves as bisexual or transgender, as well as a new special investigator on the freedom of assembly and of association.

Longtime council watchers such as Peter Splinter, who heads Amnesty International’s Geneva office, lauded Washington for leadership on a recent resolution that urged Sri Lanka to investigate alleged war crimes during the end of the South Asian state’s decades-long conflict with the Tamil Tigers.

However, turning to the United States, he noted that the council hasn’t had “serious discussions” about the American military prison at Guantanamo Bay. “That’s a pretty important shortcoming.”

“I do think things have improved in the Human Rights Council over the last one to two years,” Splinter said. “There’s a lot of room for improvement … but all told the world would be a sadder place without it.”

Others, such as Elliott Abrams, senior fellow for Middle Eastern studies at the Council on Foreign Relations, are more critical.

For one, he pointed out, council action on Syria and Libya simply reflected real changes on the ground in the Arab world.

Abrams also addressed what he described as the council’s “astonishing mania with Israel” and its policy toward the Palestinians.

Hillel Neuer, head of the Geneva-based group UN Watch, echoed Abrams’s remark, calling the council’s many denunciations of Israel “extreme.” Indeed, a permanent item on the council’s agenda specifically addresses “the human rights situation in Palestine and other occupied Arab territories.” Neuer expressed dismay that the item was maintained during the council’s recent five-year review, noting that it is the “only agenda item against one country, against Israel.”

In March, Israeli Foreign Minister Avigdor Lieberman cut ties with the council after it voted in favor of an international fact-finding mission on Jewish settlements.

The United States was the only member to vote against the resolution calling for the mission, which was accompanied by other resolutions that also were Israel-focused. Unlike in the U.N. Security Council, however, a “no” vote by Washington does not carry veto power.

In a statement, U.S. Ambassador Eileen Chamberlain Donahoe said the mission would “do nothing to promote a just, lasting peace” between Israelis and Palestinians and pledged to continue U.S. efforts to “eliminate the council’s outrageous bias against Israel.”

Members such as Austria contend that the council should be seen as a symposium for taking up tough questions. The Alpine republic voted in favor of the resolution but has underscored that it does not approve of the fact-finding mission.

“We voted for the resolution because of the main issue — the resolution is about the settlements and the illegality of the settlements, and on that our position has not changed,” said Christian Strohal, Austria’s representative to the Human Rights Council and a current vice president of the panel.

Commenting more generally about the council, Strohal cited greater cross-regional cooperation, a willingness to engage and less bloc voting as positive developments in the evolution of the panel. The United States, by not standing aside and trying to work from within, has made a significant difference, he added.

“The council is doing well and better than expected,” he said.

Hans Peter Manz, Austria’s ambassador to the United States who was stationed in Switzerland before being posted to Washington, described the council not as a “court” but rather as a useful and important “forum” for discussing uncomfortable issues.

“No country in the world has a spotless human rights record,” he pointed out. “The battle for human rights is one that must constantly be fought.”

In upcoming council sessions slated for June and September, delegates will turn their focus to Belarus, Sudan and Syria, according to Strohal.

The panel will also have to contend with significant turnover as a third of its members reach the end of their terms later this year. How the departure of Cuba, among others, will impact the institution remains to be seen.

One replacement candidate, Venezuela, has already raised some eyebrows.

Human Rights Watch describes the South American heavyweight as having a “precarious human rights situation” due to a weakening of the country’s “democratic system of checks and balances under President Hugo Chavez.”