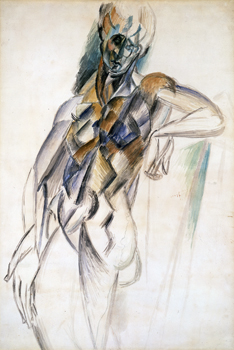 Some 60 drawings at the National Gallery of Art chronicle Pablo Picasso’s evolution as a draftsman during the first 30 years of his career, including “Standing Nude.”

Exhibitions featuring expansive retrospectives of an artist’s best-known work are nothing new, but it’s not as common to catch a glimpse of how artists arrived at their distinct personal styles.

Pablo Picasso became an artistic icon of the 20th century for his pioneering work in cubism and other movements, but it was his drawings that quietly helped pave his trailblazing path. “Picasso’s Drawings, 1890-1921: Reinventing Tradition” at the National Gallery of Art gives a behind-the-scenes look at Picasso’s development as an artist through a medium that was not his best-known form of expression, even though he was arguably the greatest draftsman of his era.

“Drawing served as an essential means of invention and discovery in Picasso’s multifaceted art, connecting him with the European masters of the near and distant past,” said Earl A. Powell III, director of the National Gallery. “Picasso’s work has long been integral to the gallery’s collection and has been the subject of six important exhibitions here, but this is the first to focus on his major drawings, watercolors, pastels and collages.”

The notion that drawing would serve as a building block for Picasso’s groundbreaking modern paintings, sculpture and collages shouldn’t come as much of a surprise, given that he was the son of a drawing instructor.

The 30-year span of the 60 works on display begins when Picasso was just 9 years old. With paper and pencil, the young artist depicted a sculpture of Hercules that was in his family home. He had not yet received any formal art training and clearly struggled with some aspects of the sketch — a raised arm is outlined twice in slightly different positions. But it’s clear he had talent from an early age and was proud of his work — it’s hard to miss his full signature placed along the bottom of the page.

Another childhood drawing, of a bullfight, created when Picasso was 11, shows a leap in his artistic abilities and understanding of classical draftsmanship. The bull and matador in the foreground demonstrate Picasso’s shading technique and ability to convey motion. The stadium is filled with reveling spectators who are drawn in a much simpler style that is reminiscent of Picasso’s famous depiction of Don Quixote later in his life. 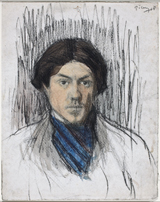 Picasso began intensely studying art around the time that reproductions of drawings by old masters and 19th-century artists became widely available, exposing him to a far wider range of works than previous generations of artists. A few life drawings from his teenage years reveal the influence of Renaissance artists and their quest to accurately depict the human body.

But Picasso was also willing to experiment with styles made famous by contemporary artists. A sketch titled “Female in Nude Profile (Hommage à Gauguin)” drawn around the time of Paul Gauguin’s death features the same simple lines and long, dark hair as Gauguin’s Tahitian nudes. Picasso even signed it “Paul Picasso” as a tribute to the recently departed painter. “Two Fashionable Women,” drawn in 1900, just after Picasso had moved to Paris, is heavily outlined and almost cartoon-like, similar to Henri de Toulouse-Lautrec’s drawings of Montmartre and the Moulin Rouge. In fact, if not for Picasso’s signature, it would be easy to confuse these works as ones by the artists who inspired them.

The exhibit also traces Picasso’s evolution as a draftsman that led to his breakthroughs in cubism and collage, the most significant achievements of his long career. For example, the National Gallery notes that Picasso’s interest in ancient Iberian art led to geometric stylization in portrayals of his mistress Fernande Olivier, as he progressively rendered the human form more abstract. The beginnings of Picasso’s cubism can also be found among the interlocking elements of his watercolors depicting landscapes, still lifes and figures.

Thus, the second room of the exhibit is almost exclusively dedicated to cubist drawings. The room includes the 1910 drawing “Standing Female Nude” that was one of the first Picasso works to be displayed in the United States as part of an exhibition at Alfred Stieglitz’s gallery. The piece, radical for its time, was also among the first cubist works to ever be displayed in the United States. At first glance, the charcoal lines and semicircles don’t seem to hold much shape, but further inspection reveals the fragmented outline of a female figure. 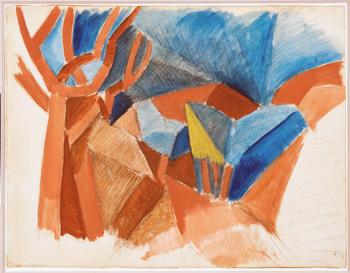 Likewise, another female nude drawn in 1909 shows how Picasso gradually arrived at cubism right around that time. The pose and outline of the model are traditional, but the rest has been drawn in a faceted manner and features an array of colors, intersecting shapes and sharp angles. It’s not quite a full abstraction, but it’s easy to see that Picasso was experimenting in that direction, and by 1911, critics were already referring to the “cubist school of artists.”

A few years later, Picasso further developed the genre by incorporating collage into his art. There are a few cubist still lifes on display at the National Gallery, some of which are partial collages. A newspaper clipping intersects with the image of a violin in a 1912 drawing. Turned on its side, the lines of text in the clipping look like wood grain, giving the drawing more vitality.

As a whole, the exhibit provides a fascinating look at the evolution of one of the most prolific artists of modern times, from Picasso’s childhood attempts at sketching to his work pioneering an artistic movement, and all the steps in between. It’s a journey that’s not only fascinating for fans of Picasso, but for casual art buffs as well.

through May 6
National Gallery of Art
located on the National Mall between 3rd and 9th Streets at Constitution Avenue, NW
For more information, please call (202) 737-4215 or visit www.nga.gov.

Kaitlin Kovach is a freelance writer in Washington, D.C.