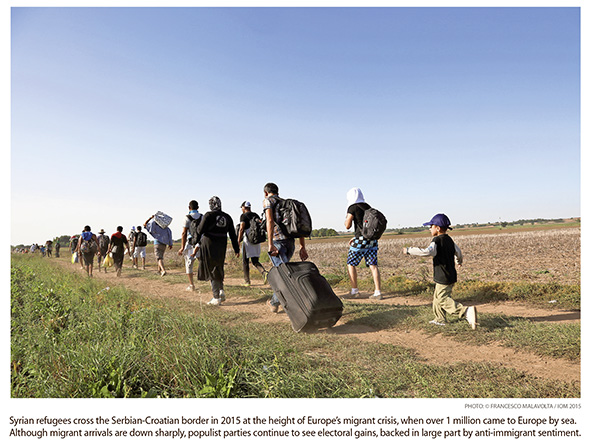 The recent electoral successes that far-right, anti-immigrant political parties across Europe have achieved this year is paradoxical in that the flood of refugees from the Middle East and Africa has abated considerably from its peak in 2015, according to a new report by the Oxford University law school.

Nearly 75,000 migrants have made their way by sea from Africa and the Middle East to Europe so far this year. In 2015, more than 1 million came.

“The current European obsession with reducing migration at all costs is even less comprehensible when considering that arrivals decreased drastically prior to the most recent escalation of rhetoric and externalization of migration control,” said the report, titled “Outsourcing European Border Control: Recent Trends in Departures, Deaths and Search and Rescue Activities in the Central Mediterranean.”

Nonetheless, the fallout from the 2015 refugee crisis has wrought wide political upheaval in which far-right, populist parties have won the hearts and minds of voters across Europe.

The number of migrants coming from Africa and the Middle East to Europe may be down, but anti-immigrant sentiment across the continent remains high. Four countries bore the brunt of the 2015 crisis: the border states of Italy and Greece, where migrants first landed, and the wealthier nations of Germany and Sweden, where the majority of migrants traveled to.

The governments that opened their doors to migrants and refugees fleeing war and poverty in nations such as Syria and Eritrea have been punished at the polls, while the parties that advocated closing their borders have been rewarded.

In traditionally liberal Sweden, which initially welcomed refugees with open arms, a far-right, anti-immigrant party called the Sweden Democrats won 17.5 percent of the vote and 63 seats in Parliament in Sept. 9 elections. They are now Sweden’s third-largest political party. While the party, which has Nazi roots, is likely to be excluded from any future governing coalition, it will be a kingmaker in upcoming negotiations.

In Austria, the far-right Freedom Party won 26 percent of the vote in October 2017 elections and is now in a coalition government with Chancellor Sebastian Kurz’s People’s Party. Together, they have proposed banning Muslim girls under 10 years old from wearing headscarves in schools. Vice Chancellor Heinz-Christian Strache, leader of the Freedom Party, said the government wanted to protect young girls from political Islam. 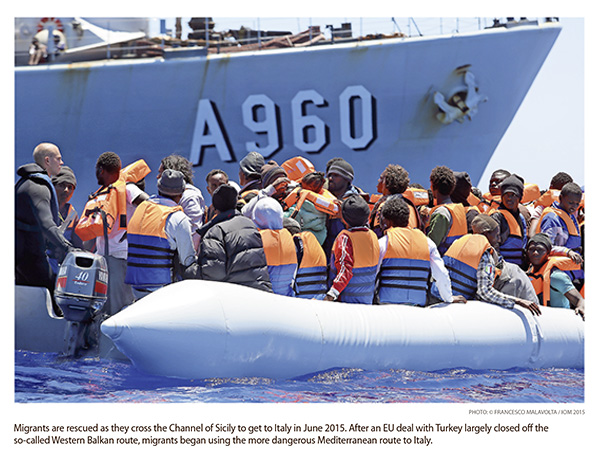 In Italy, two populist parties, the Five Star Movement and the League, won enough seats in March elections that they formed a coalition government. They promise mass deportations of undocumented immigrants, even though migrant arrivals to Italy in the first half of 2018 were down by 79 percent compared to the same time frame in 2017.

League leader and Deputy Prime Minister Matteo Salvini said when he took office that Italy had to stop being “the refugee camp of Europe” and that he would expel 10,000 migrants in one year. He backed away from that on Sept. 11 — not out of compassion, but because of logistics.

“The way things are today, we’ll need 80 years to expel them all,” Salvini said in an interview with the northern Italian radio station RTL.

That’s because despite the dramatic decline in recent migrant arrivals to Italy, the country is still home to approximately 500,000 illegal migrants. The problem is that other EU member states don’t want these migrants either.

“We used to be in the business of helping each other out,” a senior EU diplomat who asked not to be named told reporter Gabriela Baczynska in a July 8 article for Reuters. “But the spirit of consensus is gone. Everyone is going it alone.”

The EU initially proposed a modest quota system to redistribute asylum-seekers throughout the bloc, but the plan quickly fell apart after fierce opposition from Eastern European member states like Hungary and Poland. Hardline governments in Hungary and Austria also oppose any efforts to scrap the Dublin regulations that put the onus of reviewing asylum claims on the countries where migrants first land. That has left frontline states like Italy forced to register, detain and process the applications of tens of thousands of asylum-seekers.

Italy has been the point of entry for a disproportionate number of African migrants because of its close proximity to Africa. It also experienced a more recent surge of migrants after the EU signed a deal with Turkey in 2016 that sharply curtailed crossings into Greece, forcing many migrants to take the deadlier Mediterranean route from Libya to Italy. 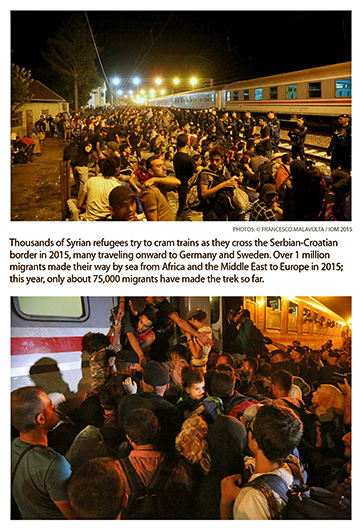 Over the summer, at Italy’s urging, the EU cobbled together an agreement to create secure centers throughout the bloc to process the asylum claims of Mediterranean migrants. But the agreement is voluntary, and so far, countries such as Austria, France and Germany have balked at hosting such centers. The EU also floated the idea of setting up offshore migrant processing centers in North African nations such as Tunisia and Egypt, but that plan has met pushback as well. The right-wing governments in Italy and Austria even proposed holding rescued migrants at sea while their claims are processed.

Meanwhile, the government that did open its doors to the largest number of asylum-seekers has since paid the populist price for its generosity.

The far-right Alternative for Germany party, or AfD, is now the largest opposition party in the Bundestag. This has caused Merkel to change her tone about accepting migrants. She said recently that her open-door policy wouldn’t happen again and that she would increase border security and deportations.

Conversely, in Hungary, Prime Minister Viktor Orbán easily won a fourth term in April thanks to his policy of zero tolerance for accepting Muslim migrants.

In September, the EU Parliament voted to censure Orbán for his hardline immigration stance and other illiberal policies, but any decision to strip Hungary of its voting rights would require unanimous consent among member states. So Hungary is unlikely to face any disciplinary action because it would be vetoed by allies like Poland, whose own right-wing, populist government rode to power in 2015 on a tide of anti-immigrant sentiment.

These electoral successes owe in part to the European Union’s perceived weakness in dealing with the refugee crisis. Ironically, this weakness has been exacerbated by Hungary and Poland, whose refusal to take in any refugees has all but paralyzed the bloc. In today’s political climate, the only thing member states seem to agree on now is that migrants need to be kicked out or kept out.

Consequently, the EU has turned to policies that “seek to limit irregular migration regardless of the moral, legal and humanitarian consequences,” the Oxford law school report said.

European Commission President Jean-Claude Juncker announced on Sept. 12 that the EU would deploy a 10,000-strong armed border force with the authority to detain and deport migrants.

The EU has also asked North African countries to close their borders to Europe-bound migrants in exchange for financial and military aid.

“This resulted in a 95 percent drop in crossings through Niger, a key transition point for migrants on the way to Libya, although it cannot be excluded that migrants are taking different, more dangerous routes in order to reach Northern African countries,” the Oxford report said.

Led by Italy, the EU also increased its support of the Libyan Coast Guard, which has established a huge search-and-rescue zone off its coast in the Mediterranean Sea and claimed the authority to order privately owned rescue ships that pick up shipwrecked migrants to take them back to Libya.

Charities that own those ships say that the Libyans are less interested in rescuing migrants at sea than in returning people to Libya.

“If you look at the assets the Libyan coast guard is using, it’s very clear that the priority is not saving lives. I have not seen a single life jacket,” said Ruben Neugebauer of the German charity Sea Watch in a June 7 interview with Euronews. “It’s not about saving human lives. It’s only about bringing people back to Libya — a war-torn country where refugees face unlawful detention, torture and even death.”

EU officials have defended their decision to outsource naval search-and-rescue operations and shift their resources toward targeting the traffickers who prey on migrants. They say the prospect of being rescued at sea and brought to Europe perversely encourages more migrants to risk the deadly trek and tempts smugglers into crowding more people on ricketier boats.

Humanitarian groups say this argument is essentially a cop-out. The Oxford report says that downgrading search-and-rescue (SAR) efforts “has little or no effect on the number of arrivals, and it is rather the absence of SAR that leads to more deaths.”

Indeed, while the Libya pact has dramatically reduced the number of migrants arriving in Italy, it has also resulted in more deaths along the dangerous Mediterranean crossing. For migrants who are picked up by Libyan patrols, they are sent back to a country where they are vulnerable to slave auctions, sexual exploitation and other forms of abuse — sometimes at the hands of the very people who picked them up. Under a deal brokered by Italy in 2017, for instance, Libya’s beleaguered security forces reportedly paid militias to round up migrants, even though those same militias often ran human trafficking rings. 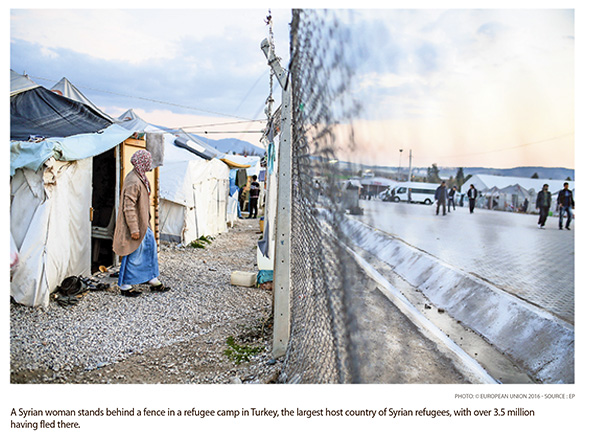 Making matters worse is that Italy closed its ports to charity-owned and EU rescue ships in June. As EU member states bickered over who should take in hundreds of stranded migrants, Spain finally agreed to take in the largest boatload of over 600 migrants. But with Spain increasingly becoming the new destination for asylum-seekers from North Africa, the country’s new socialist prime minister, Pedro Sánchez, could soon face the same populist backlash that swept Germany and Sweden.

And while migrant arrivals in Europe have decreased dramatically from their 2015 peak, there are reasons to suspect that they will surge again.

Tripoli, Libya’s capital, has been wracked yet again by violence in recent weeks as armed groups fight one another for control of the city.

Climate change is also expected to bring huge numbers of asylum-seekers to Europe in the coming decades, according to a study by professor Wolfram Schlenker of Columbia University.

Yet, the EU has been unable to form a cohesive response to migration, in part because it has been shouted down by anti-immigration populists like Salvini and Orbán who say immigrants erode traditional European values while stealing jobs and draining social services.

The rancorous debate has drowned out academics who argue that the numbers don’t back up the populists’ claims that immigrants are “invading” Europe.

Even at the height of the refugee crisis, many experts point out that Europe, with over 500 million people, was more than capable of absorbing what amounted to fewer than 2 million new arrivals since 2014 — a figure that has since dropped precipitously anyway.

Pro-immigration advocates have also tried to dispel myths that immigrants commit more crime or use more welfare services. They concede that Europe has struggled to assimilate the waves of newcomers in recent years, but they argue that integration is still a more effective strategy than closing borders, which threatens jobs and trade. In fact, they contend that migration is a net gain for European nations, which face declining populations and need immigrants to grow their economies.

But these academic arguments often fall on deaf ears amid the populist noise.

“Migration is Europe’s future,” said Jacek Kucharczyk, president of the Institute of Public Affairs in Warsaw, Poland. “Pandering to xenophobes, as so many pundits advise, is not a way forward. Working out a comprehensive European migration and integration policy — and then its consistent implementation — is the only way to reduce the public’s fear of migration and to push the populists back to the political wilderness where they belong.”