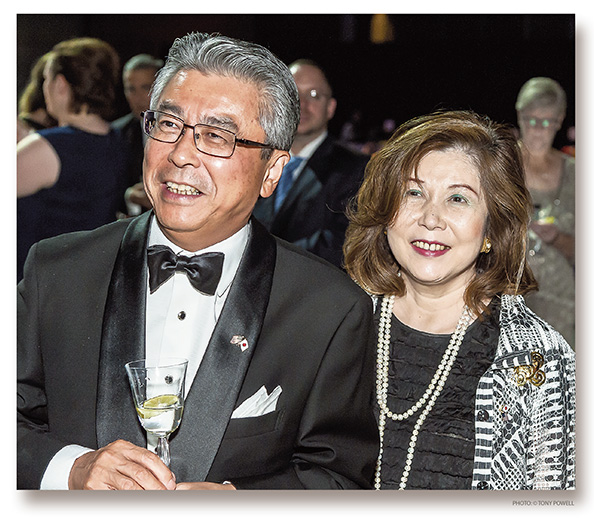 Shinsuke Sugiyama, Japan’s recently appointed ambassador to the U.S., has hit the ground running, hobnobbing at events ranging from the National Cherry Blossom Festival celebration at the Japanese Residence, where he made his official debut, to the National Multiple Sclerosis Society’s 40th annual Ambassadors Ball, which he co-chaired with his wife Yoko last month.

Sugiyama is a straight-talking, jovial diplomat whose shoot-from-the-hip style should mesh well with President Trump’s blunt style. But whenever Yoko is by his side, the ambassador’s garrulous nature goes up a notch, as he lavishes praise on his wife while often casting admiring glances at her.

Apparently, he’s had his eyes on her from the beginning, as Yoko told us during a recent interview.

“We attended the same prep school. We had assigned seats — I was near the front of the room and he was near the back. One day, the boy who sat next to me was absent. Shinsuke took the opportunity to move up and sit next to me,” she recalled.

“We started talking and he asked me out. Then, he started showing up at the school gate, waiting for me to come out. I guess you could say he was a pretty aggressive suitor,” joked the affable wife. “I had many boyfriends. I was very popular — but there were only 10 girls in our school of 1,000 students!”

They dated regularly throughout prep school and off and on in college as he continued to pursue her. “I was dating others, but he kept asking me to marry him.” Finally, Yoko broke up with him, saying she wouldn’t marry him because he was leaving to study at Oxford in the U.K. and she wanted to stay in Tokyo and attend graduate school. “But after we stopped seeing each other, I felt so lonely. I realized I was in love with him.”

His persistence finally paid off. He contacted her one last time before his departure to Britain. They met and then, as she simply says, “It was happily ever after.”

Yoko and her husband have now been married almost 40 years and have two grown children together along with four grandchildren. “Our son Shunsuke and his wife live in Japan with their four children and he runs his own company in Hyogo Prefecture. Our daughter Reina is a model and fashion designer in New York,” Yoko told us. “Now that we are in Washington, she drives down sometimes to attend events with us, although she’s planning to move to California soon.” 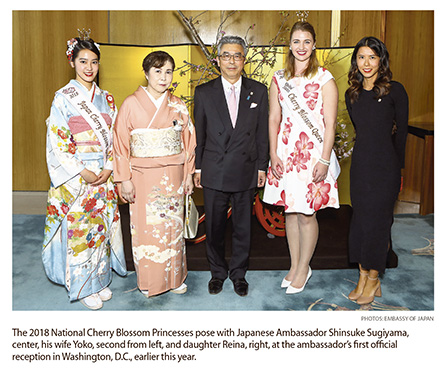 Yoko is from Kanazawa, a picturesque city that is about eight hours away from Tokyo by high-speed rail. She graduated from the Tokyo University of Foreign Service with a degree in Spanish studies and studied graduate-level linguistics.

This is their second posting in Washington.

“When we were here before, the children were 4 and 6 and we lived in Bethesda. I brought a babysitter with me but I was the driver,” Yoko said. “I took the children to piano, martial arts and ballet. They were 8 and 10 when we left.”

Shinsuke Sugiyama served here from 1989 to 1992 as first secretary in the Economic Section. The Sugiyamas have also been posted to South Korea and Egypt. He has held various positions in the Ministry of Foreign Affairs dealing with issues ranging Middle Eastern and African affairs to climate change. Most recently, he served as Japan’s vice minister for foreign affairs before coming to Washington for his first ambassadorial posting.

“It is a unique opportunity to be here in Washington. We get the chance to meet people from all over the world,” Yoko said. “This is such an important post and an honor for us to represent Japan to the United States, our longtime and indeed single-closest ally. The United States and Japan have had such a beautiful, mutually beneficial relationship for many, many decades. I think we are living in a time when we have to constantly work together to make the world safe and prosperous, so I would be happy if I could remind people of all the wonderful things that have come out of this relationship and continue to work to build upon that friendship and strengthen it for the future.

“My husband is the official ambassador,” Yoko continued, “however, in a social context, I think he believes that working together as a couple will tell more about what kind of a country Japan is.”

While they’ve both worked to promote their homeland and enjoy their “happily ever after,” like most couples, they’ve had their hiccups along the way.

“I don’t normally say this in public, but I have been suffering from severe chronic back pain for over 20 years,” Yoko revealed to us. “Thanks to treatments and consultations with specialists in various medical fields, I have learned how to manage — and managed to live with — the back pain because I want to do what I want to do, including supporting my husband as ambassador of Japan as much as possible.”

And she’s done exactly that. 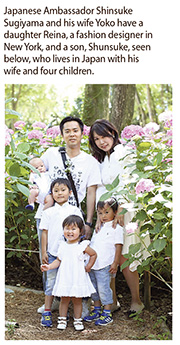 “Right after our arrival — I think it was the second day — we attended the opening ceremony for the National Cherry Blossom Festival (NCBF),” Yoko recalled. “We also rode together in a convertible in the National Cherry Blossom Parade … and my husband and I hosted dinners and receptions at our residence. The NCBF is such a beautiful example to express the large number of people who support the friendship between our two countries and we’re happy to have the opportunity to carry on these traditions.

“Coming up in 2020, we’ll be hosting the Tokyo Olympics and Paralympics, so there’s a lot of excitement and energy as we prepare for that. We’re looking forward to welcoming lots of people in Tokyo to enjoy the Games,” Yoko said.

“We would also really like to invite more young people to visit and study abroad in Japan and experience our beautiful country. We have a government program, the JET Program, where we invite college graduates to live and work in Japan for a year or more, mainly to teach English but there are other kinds of jobs, too.”

In fact, the Japan Exchange and Teaching (JET) Program, founded in 1987, has sent more than 66,000 global participants, including nearly 34,000 Americans, to work in schools, education boards and government offices throughout Japan. Over 40 countries participate in the teaching exchange program, which is managed by the Japanese government (also see “JET Program Celebrates 30 Years of Cross-Cultural Exchange” in the September 2017 issue of The Washington Diplomat).

Yoko said she wants Americans to experience all aspects of Japanese society, not just those they commonly associate with this island nation of nearly 130 million, which boasts the world’s third-largest economy.

“My impression is that when people think of Japan, they think of advanced technology, sushi and maybe samurai, geisha or other aspects of our traditional culture,” Yoko told us. “And those things aren’t wrong, but I do want Americans to meet and become friends and neighbors with everyday Japanese people. I believe that the Japanese are kind and courteous. The politeness and attention to detail that many Japanese value makes Japan a very easy and convenient place to live. I would hasten to add that we Japanese and you Americans are totally in sync in sharing fundamental values such as democracy, freedom of speech, rule of law and the principle of free market [economics].”

When asked her if there was anything else she wanted people to know, she smiled and said, “Simply to say, both of us really love America.”