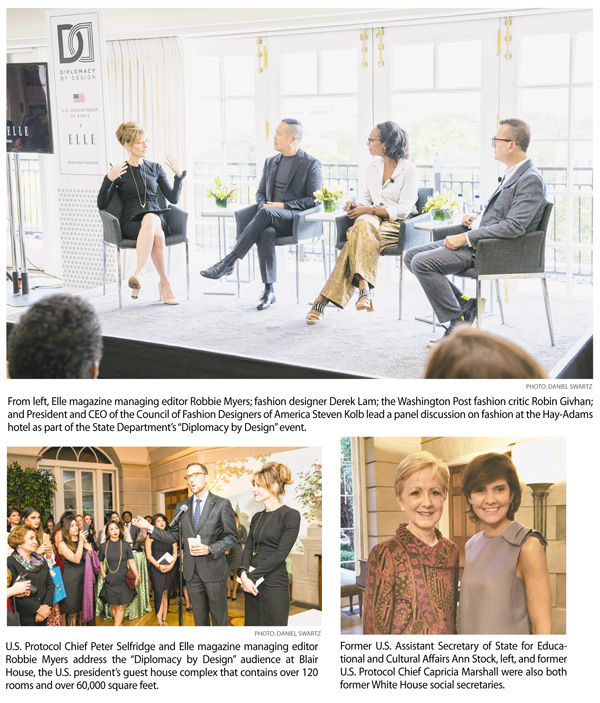 When first lady Michelle Obama bared her toned shoulders in a series of sleeveless dresses, fashionistas around the world took notice. Former first lady Hillary Clinton’s style has evolved from dowdy and dated attire to elegant but understated pantsuits — a seemingly calculated decision to keep the focus on politics and off her wardrobe (though it didn’t do much to help her at the polls). Now all eyes are on incoming first lady Melania Trump, a former model who’s no stranger to designer labels, though her high-priced wardrobe may clash with her husband’s populist message.

While men don’t have to endure the same unremitting scrutiny as women do over their appearance, a president’s choice of tie or an executive’s decision to forgo one altogether conveys distinct messages as well.

“Fashion is everywhere,” said U.S. Protocol Chief Peter Selfridge. “Fashion transcends languages and borders. It speaks volumes without saying a word and is perhaps the single best way to understand a country’s identity and heritage.”

To honor fashion’s sometimes-underappreciated role in what Selfridge called “building bridges,” the State Department’s Protocol Office partnered with Elle magazine for the first-ever “Diplomacy by Design” on Oct. 21. The event featured a panel discussion with fashion industry experts at the Hay-Adams hotel followed by a reception at Blair House that showcased American and international designs. Sponsors included Brooks Brothers and CityCenterDC, whose high-end stores include Carolina Herrera, Longchamp and Moncler.

Fashion is increasingly used as a public diplomacy tool. Over the years, various D.C. embassies have hosted fashion or jewelry shows to promote their native designers — among them Estonia, Lebanon, the Philippines and Canada. Diplomats from over 80 countries participated in the State Department event, including a few ambassador wives but also a large number of male envoys. Among them were ambassadors from Belgium, Bulgaria, Cabo Verde, Kazakhstan, Lithuania, Mauritius, Mongolia, Mozambique, Nicaragua, Serbia, Somalia, Timor-Leste and Sri Lanka (who donned a striking traditional ensemble from his homeland).

In a video message to the well-dressed audience, Secretary of State John Kerry extolled the virtues of fashion and other cultural traditions to bind people together.

“The clothes we create, the food we eat, the sports we play and the traditions that we honor are all part of a nation’s identity and therefore an integral part of how countries relate to one another,” he said.

“We know that America’s standing in the world isn’t determined solely by political and security policies,” he added. “On many occasions, cultural diplomacy can achieve what traditional diplomacy cannot because it speaks a universal language.”

Kerry said fashion supports a range of lofty goals, from women’s empowerment and environmental sustainability to inclusive economic growth and “the rights of people to be able to earn a decent living.” 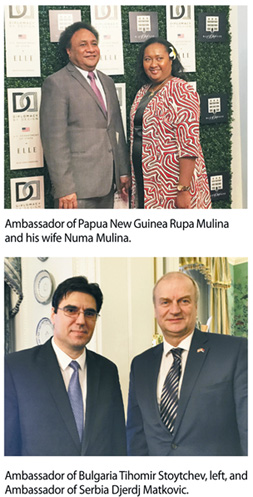 In fact, the fashion industry is a global economic engine, generating $1.9 trillion, including $380 billion in the U.S. alone.

Beyond business and building bridges, however, clothes are a practical necessity. After all, we’d be naked without them. Sometimes, though, even when we’re not trying to make a fashion statement, we do.

Apparently, even the humble hat can make waves.

Selfridge recalled the furor that Benjamin Franklin sparked when he presented his credentials to King Louis XVI to become America’s first ambassador to France in 1776.

“Instead of wearing a typical suit bedazzled in medals and jewelry, he wore an ordinary brown suit and a plain brown fur hat — the same one he had on the boat to cross the Atlantic to keep warm,” the protocol chief said. “Turns out he did wear that hat to protect his bald head, but in the worldly court of Marie Antoinette, it endeared him to the French because they were on the cusp of a transition themselves to escape the gilded luxuries and excess of the period.

“The French loved the hat so much in fact that many people started to copy the look on the streets of Paris. Who knew Benjamin Franklin was our first fashion icon?” Selfridge quipped.

“How we dress is essentially tribal,” said Robbie Myers, editor in chief of Elle, who led the panel discussion. “Fashion is a conversation about women, men, power, sexual mores and cultural values.”

Myers had just wrapped up Fashion Week in New York. She noted that while the fashion world is still concentrated in four cities — New York, Paris, London and Milan — other cities are catching up (Shanghai and Mumbai, for example, host their own fashion weeks).

Panelist Steven Kolb, president and CEO of the Council of Fashion Designers of America, said designers are expanding into other markets, including Latin America, Asia and Russia.

Fellow panelist Robin Givhan, the Washington Post’s fashion critic, predicted that just as the United States evolved from a country of fashion consumers to one of creators, large-scale clothing manufacturing hubs such as China will eventually make that transition as well.

But American style has also been described as boring by many foreigners. The panelists noted that women in particular walk a fine line between looking sophisticated without being overtly sexual, especially in a conservative city such as Washington, D.C

Myers recalled attending a conference in France where one of the female panelists wore a low-cut blouse and no bra, while she herself wore a “bullet-proof jacket.” Afterward, Myers asked several men how they viewed American women. “You girls are so uptight,” one of them told her. 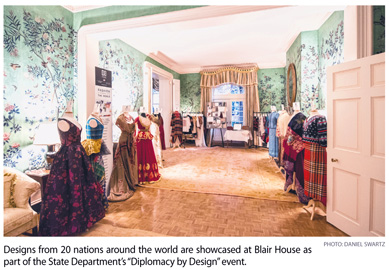 Givhan agreed that American women tend to sacrifice style for respect. “There often seems to be a sublimation of the pleasure and delight in fashion in exchange for being perceived as authoritative and powerful.”

The California-born designer, whose clothing strikes a balance between sleek and smart, called Michelle Obama a “Godsend for promoting fashion.”

He praised the first lady (who wore one of his outfits during a trip to China) for dressing with a “depth of knowledge and appreciation for the occasion,” blending the intellectual with the beautiful.

Talk of Obama naturally led to comments about Hillary Clinton’s wardrobe. Clinton, who in the 1990s was often disparaged for her bulky style, largely sidestepped the issue while running for president by adopting a more modern, tailored look.

Lam said Clinton the candidate “almost found the perfect anonymous quality in which to dress so that policy was really at the forefront of her campaign.”

Vanessa Friedman, writing in a July 2016 piece in the New York Times, said that high-level women often tone down style in favor of substance and “that for a woman to wield power in what was historically a man’s world, she had to pretty much dress like a man — but brighter!”

That trend may be changing, she wrote, pointing to British Prime Minister Theresa May, who openly embraces more daring, feminine fashion choices — including leopard-print kitten heels.

Of course, first ladies and female heads of state aren’t the only ones who worry about what to wear. Today’s young girls are under tremendous pressure to conform to idealized, often-unattainable physical ideals.

Kosovar Ambassador Vlora Çitaku, who wore a stunning black-and-white dress designed by one of her countrymen, asked the panelists about the pressure to look perfect in today’s society.

Lam admitted that he suffers a “crisis of confidence” during his runway shows, where models as young as 17 are dolled up to appear much older. “What am I saying to women? That you have to be 17, 18 or 19 to look good?” Lam mused, conceding that the industry still has a long way to go to embrace women of all shapes, sizes, ages and ethnicities. 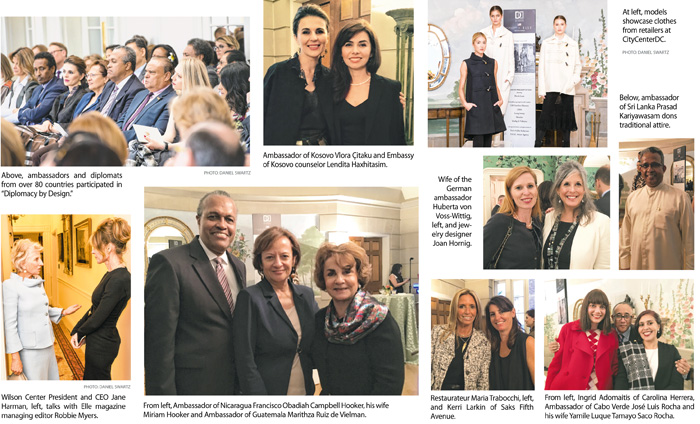 Of course, women aren’t the only ones under the microscope. Men are judged on their looks as well. Myers asked what message Facebook CEO Mark Zuckerberg sends when he shows up to a shareholder’s meeting wearing a hoodie, and whether the tech phenomenon is heralding a shift in how professional men dress.

“It is about comfort but I also think it is about being a disruptor,” Givhan said of Silicon Valley innovators. At the same time, a K Street lawyer “is not looking to disrupt but rather get ahead in the system, so there’s always going to be a place for a suit because of all that it implies,” she said, noting that the traditional suit and tie convey respect and serve “as the language of diplomacy.”

In fact, that suit — along with a bevy of dresses, coats, jewels and accessories — were on display at Blair House, where the U.S. president’s official guest house was transformed into a runway of sorts. Guests even got a glimpse of America’s first “diplomatic uniform.” The colonial-inspired black waistcoat over white pants was designed in the mid-1850s for U.S. Minister to France John Y. Mason as a compromise between the “simple dress of an American citizen” and the more elaborate uniforms worn by foreign diplomats.

Also spread across the Blair House complex were intricately crafted gowns by designers from Afghanistan, Ecuador, Georgia, Kenya, Singapore, Yemen and various other nations. Former Secretary of State Madeleine Albright’s dazzling pin collection was also showcased, as were coats worn by past U.S. presidents, courtesy of Brooks Brothers, which has dressed 39 out of the 44 American presidents.

That included a replica of the overcoat and red cashmere scarf that Barack Obama wore during his 2009 inauguration. Visually, the bulky black coat isn’t much to look at, although it served its purpose when the 44th president had to brave below-freezing temperatures during his swearing-in.

Indeed, the history of Brooks Brothers is as much practical as it is illustrious. In 1861 during the American Civil War, Quartermaster Gen. Chester A. Arthur ordered the company to change the color of the Union Army’s uniform from gray to blue. Why? To distinguish between Confederate soldiers, who also often wore gray, leading to obvious confusion on the battlefield.

Today, fashion may no longer be a matter of life and death, but as Secretary of State Kerry said, it continues to “change our view of the world and the world’s view of us.”