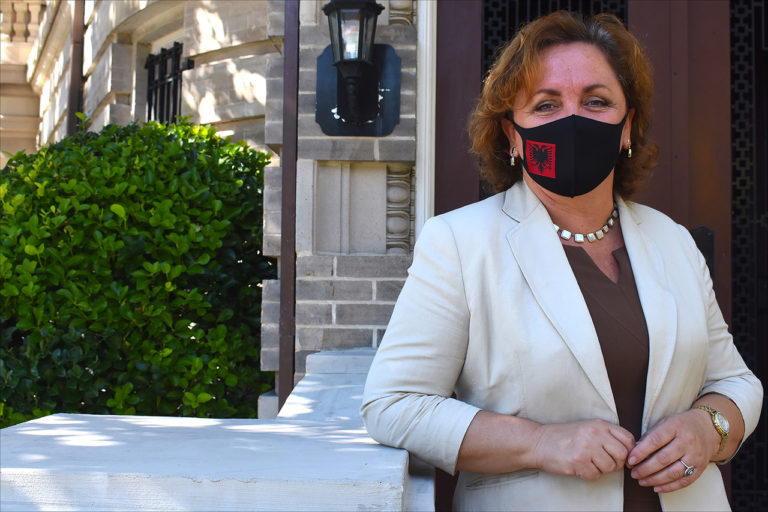 It’s no secret that the coronavirus pandemic has hit virtually every endeavor known to humanity. That includes both publishing and diplomacy.

Last year, The Washington Diplomat celebrated its 25th anniversary as the flagship newspaper of the D.C. diplomatic community. But even before COVID-19, printing our newspaper month after month became increasingly difficult because of online competition. That forced us to focus more on conferences and events like the White House Correspondents Dinner pre-party.

With diplomatic receptions now a thing of the past, The Diplomat has eliminated the print edition and shifted entirely to online publishing and virtual events.

“It has been a tough transition for our company, but our loyal staffers have been volunteering their time to help make these changes,” said The Diplomat’s founder and longtime publisher, Victor Shiblie. “With challenges come opportunities to adjust. We will continue to connect diplomats with the U.S. government and business community in new and innovative ways.”

On Dec. 8 to 9, The Diplomat will host its 2nd Annual Global Education Conference. The online event allows sponsors to have live virtual booths where they can connect with diplomats directly.

Following a tech upgrade to our website, we’re proud to introduce Washington Diplomat Digital — an online publication covering the activities of the D.C. diplomatic community. We encourage all embassies to email us at news@washdiplomat.com with story ideas.

These past 12 months haven’t been easy for Floreta Luli-Faber, to say the least.

On Nov. 26, 2019, Albania’s ambassador to the United States watched in horror on TV as a four-story house in Durres collapsed on camera, following the massive 6.4-magnitude earthquake that ultimately killed 51 Albanians, injured 2,000 others, left an estimated 13,000 people homeless and caused more than a billion dollars in damage.

Then, after Albania dug out from the disaster and began its slow, painful recovery, another catastrophe hit: coronavirus. On Oct. 22, Faber herself tested positive for the virus at Washington Dulles upon arrival from a business trip to Tirana.

“I was tested negative the day I headed to Albania. At every meeting, official or otherwise, I wore a mask and kept my distance, but clearly this wasn’t enough,” she announced on Facebook, advising her followers: “Don’t take off your masks at any moment.”

Faber, who wears a custom-made mask decorated with the red-and-black flag of Albania, told us in a Sept. 30 interview: “We’re focused right now on protecting our population. To do that, we had to close all our borders and worked really hard to repatriate thousands of Albanians who wanted to return home from the U.S. and other countries.”

The Albanian Embassy is staffed by only 10 people. From mid-March to May, the mission was closed, and everything was put online except for visas and emergency functions.

“We’re back in the office now, but very few meetings happen in person,” she said. “Until the end of June, whatever we did on Zoom was all COVID,” said Faber, whose country holds the 2020 chair of the Organization for Security and Cooperation in Europe. The first delegation since the mission’s initial closure arrived in June, led by Albania’s acting foreign minister, Gent Cakj.

“In one sense, it’s easier to speak to people,” Faber said. “Every time we want to contact someone in Congress or at the State Department or wherever we’ve had Zoom or phone calls or WhatsApp. This period has allowed us to talk easily with others.”

But old-fashioned face-to-face communication needs to return as soon as possible, she cautioned, adding: “All of us are in the same boat on this.”

Besides the embassy itself, Faber oversees two consulates — one in Washington, one in New York — as well as three honorary consulates in Atlanta, Dallas and Detroit.

“It’s the new normal, and this is what we’re experiencing now. When you see even small children wearing masks, you wonder how long that’s going to be the new image of humanity,” she said. “Are we going to be like that for another year, or another five years? Was Sweden right? Was Albania right? Was Israel right? Every country did its best with the knowledge and information we all had.”

Monaco’s Albert II was first world leader to be infected

The pandemic struck particularly hard in Monaco, when back in March, Prince Albert II became the world’s first head of state to test positive for COVID-19. That made him the European principality’s 10th resident to come down with the disease.

As of press time, Monaco — which is smaller than New York’s Central Park — has reported a total of 271 coronavirus infections and two deaths.

Maguy Maccario Doyle, the country’s ambassador in Washington since 2013, said her wealthy little country is home to 39,000 inhabitants. Yet only 9,500 of those people hold Monegasque citizenship; the rest are scattered among 123 nationalities.

“This coronavirus has definitely changed my job, in the sense that I’ve had to deal with all sorts of requests,” Maccario told us. “We have a lot of residents holding British, Swiss, Ukrainian or other passports who want to go back from the U.S. to Monaco — and to travel to Monaco, they have to go through France.”

Since the pandemic started, Maccario and her staff have helped more than 150 residents, nationals and students.

“It’s a very complicated and cumbersome process,” she said. “Unlike other countries, we do not have consulates, so everybody goes through our embassy. And we try our best to process each request. We’ve even had people calling us to help them get in touch with other embassies.”

Likewise, the Embassy of Uzbekistan has been closed to the public since March 22. Most of the mission’s 15 employees are still working remotely, from home. Only Ambassador Javlon Vakhabov (whose residence is attached to the embassy) as well as his assistant, driver, accountant and office manager, physically show up for work.

All activities have been transferred to a virtual format, with the introduction of remote consular services for both Uzbek citizens as well as locals needing visas and other services.

“We have limited all our in-person communication to nearly zero,” said Vakhabov. “Since March, we have had no more than five meetings in person. To compensate for this, we are actively using Zoom, Webex and Microsoft Teams for all our meetings. Our productivity has increased by about 50% and is much higher than before the pandemic.”

Until Aug. 15, the embassy was issuing no tourist visas to the former Soviet republic in Central Asia. But now, Americans may travel to Uzbekistan without having to quarantine for 14 days.

Earlier this year, the embassy organized special fights to bring 1,672 Uzbek nationals back home from the United States; these included temporary U.S. residents, students, elderly people and expectant mothers. In late March, it also flew, via Uzbekistan Airlines charter, some 150 personnel from the U.S. Embassy in Tashkent to Washington. As quarantine measures started easing, the embassy brought back 56 of those officials to Tashkent, including U.S. Ambassador Daniel Rosenblum.

“For now, most of our diplomatic staff still continue to work remotely,” he said. “We have all the necessary hand sanitizers in place and have introduced social distancing regulations. But at this moment, we are not sure when we can resume our full-scale in-person work at the embassy. Safety remains the top priority for us.”

As it does for Hynek Kmoníček, who heads the second-biggest Czech Embassy in the world, after the one in Brussels. The ambassador said his mission on Spring of Freedom Street normally welcomes at least two delegations a week. But since March, not a single delegation has come.

“It completely changed the normally very busy life of the embassy,” Kmoníček said. “So did the closure of local schools. Most of our employees have kids of school age, so if their children are home, our employees have to stay at home too — so we solved this problem the Czech way.”

The embassy promptly opened its own school, hired teachers, and now hosts between 20 and 30 kids every weekday morning; some parents also help out as volunteers.

“It’s basically an old-fashioned school with children of different ages studying together,” said Kmoníček. They have classes on Zoom like everyone else, but they continue with their education because in the Czech Republic, school attendance is compulsory.”

Meanwhile, Kmoníček has kept the embassy open for basic functions like consular affairs, while moving political functions to cyberspace via Zoom. He’s also been hosting very small social events at the Czech residence.

“The consular officers are in contact with the public, so they wear masks and are regularly tested so we know they’re safe,” he said. “We try to keep things as safe as possible, and as small as possible. Recently we had a piano concert, with the pianist inside and people sitting outside in the garden because of the coronavirus.”

Only 30 guests could be accommodated; otherwise, maintaining social distance would have been impossible.

And to get people outside and not be trapped at home all day, the Czech Embassy recently organized its first Embassy Bike Challenge. From Sept. 28 to Oct. 28, participants are invited to cycle exactly 19.18 kilometers along the Potomac River in honor of Czech independence, which was established in 1918.

The route begins at the Chesapeake & Ohio Canal Towpath in Georgetown, under the Key Bridge, and finishes at Mile Marker 13 at Great Falls, Virginia. So far, 45 people — including seven children — have done the scenic route at their convenience. The Strava smartphone app records their performance and offers proof they’ve actually covered the entire distance.

“We’re making a competition to see who will be the quickest,” said the ambassador cheerfully. “If the winner is a diplomat, he or she will be given his portion of Czech beer. If a kid wins, we will adapt the prize accordingly. And people are encouraged to take pictures along the way.”

After eight years as Cuba’s top diplomat in the United States — a period that saw the dramatic re-establishment of diplomatic ties between Washington and Havana after a 54-year hiatus — José Ramón Cabañas Rodríguez is going home. He will be replaced by Lianys Torres Rivera, Cuba’s current ambassador to Vietnam.

Torres, the first woman ever to head Cuba’s mission in Washington, will take up her new post as chargé d’affaires upon approval of her visa, and once international flights resume. Torres graduated from Havana’s Instituto Superior de Relaciones Internacionales in 1994 and has been posted in Hanoi since September 2017. As ambassador there, Torres has been instrumental in securing Vietnamese aid to Cuba to help fight COVID-19.