The newly reopened Freer | Sackler Galleries offer visitors a look back at the ancient Egyptian version of the unofficial mascot of the internet: cats.

“Divine Felines: Cats of Ancient Egypt” is an undeniably social media-savvy exhibition, but there is plenty of substance for visitors in between sending Snapchats or posting Instagrams. The exhibition at the Arthur M. Sackler Gallery explores the role and meaning of cats in ancient Egyptian society through the arts, showcasing everything from a sarcophagus for a cat mummy to items adorned with cats such as jewelry, waterspouts and weights.

With more than 80 works on display dating from the Middle Kingdom to the Byzantine period, the show highlights the fascinating and surprising ways that cats played a key part in the ritualistic and everyday lives of ancient Egyptians. 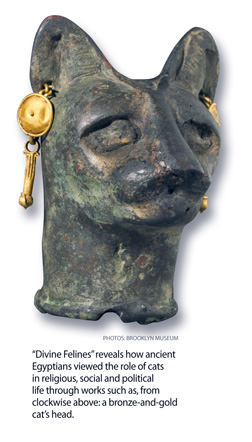 The museum has only a small collection of Egyptian art — not enough for its own gallery — but wanted to continue the tradition of having an exhibition about ancient Egypt after its renovation, curator Antonietta Catanzariti said. This show, organized by the Brooklyn Museum, fit the bill, given that “lots of people here love cats and there really was just a buzz around it,” she told The Washington Diplomat.

“We liked it because this exhibition was dealing with this aspect of ancient Egyptian culture we don’t often talk about,” Catanzariti said. “And it would please visitors who love cats.”

Cats in ancient Egyptian culture served as everything from domesticated animals that fended off vermin and killed snakes to sacrifices for the gods.

The dual nature of cats — protective and nurturing on the one hand, ferocious and aggressive on the other — is a central theme in the show. According to the Sackler, these traits, along with their loyalty and independence, became symbolic representations of Egyptian rulers and gods.

It is a “unique exhibition because it presents a topic that isn’t often developed as a theme,” Catanzariti noted, and it “also shows beautiful pieces of the Brooklyn Museum.”

This marks a great opportunity for Washingtonians to see the museum’s “amazing collection,” according to Catanzariti. “This is what I hope will drive people to come and check out the exhibition, besides being cat lovers.” 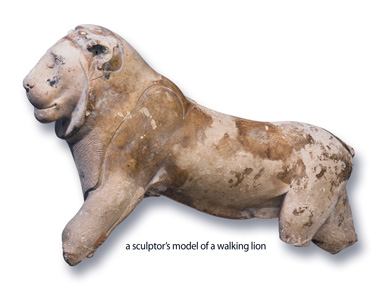 “Divine Felines” details how ancient Egyptians did not worship cats, but instead associated specific traits related to them with deities. Take the sun god Re, for instance, who was associated with cats because they enjoy warmth and often have yellow or reddish fur, or the goddess Sakhmet, who was often depicted as a lioness-headed warrior. Feline deities were seen as divine protectors, like the goddess Bastet, a daughter of the sun god and a symbol of motherhood who was commonly associated with small cats.

Egyptians not only associated cats with deities, but they also bred and sacrificed them to the gods. They were then often mummified and buried in elaborate coffins, such as the one in the exhibition that is in the shape of an elegantly seated feline.

An impressive array of artifacts fills the exhibition space, from grand sculptures to small personal mementos. The most striking is the cat mummy on display from the National Museum of Natural History. It is one of the thousands that were produced as an offering to temples, Catanzariti said, and the tightly wrapped linen with cat-like features painted in black is a showstopper. 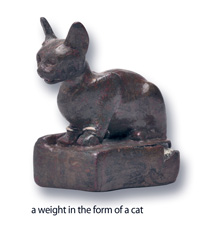 “We’re now paying more attention to these types of objects, like cat or animal mummies in general, and we’re doing more studies, X-rays, scans, to allow us to know more what’s behind the wrappings of this mummy,” she said. “Studies are still trying to understand the process — we know it is similar to humans, but it’s a bit different. This object really allows the viewer to connect with this whole idea of cats being offered to temples and that specific time period.”

Don’t worry puppy fans — dogs have their day in this show as well. In ancient Egypt, dogs and jackals lived on the edges of the desert, which is where most cemeteries were located. Before viewers depart the exhibition, it briefly touches on how canines were used to symbolize guardians of the dead and as pets.

But cats are certainly the stars of the show. And along with showcasing many social media-worthy objects, the exhibition helps to demystify the notion that many visitors may have of ancient Egyptians worshipping cats, Catanzariti said.

“It can be hard to think about the way Egyptians were actually observing the natural behavior of cats, and by seeing those, they associated those attributes to gods,” she told The Diplomat. “For some people, it’s quite hard to see how that works, but then when you think about how a cat you own has a hunting attitude or is more relaxed, it can be related to Egyptian gods and goddesses. Don’t think of Egyptians as worshipping animals, but as observing the natural world.”