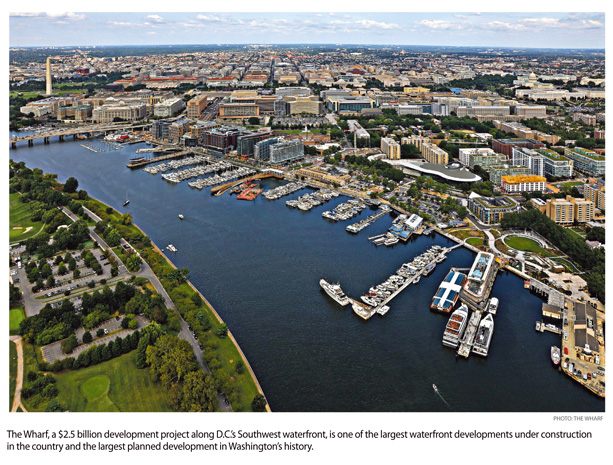 A decade in the making, Washington finally has its Wharf. The $2.5 billion waterfront development officially opened for business on Oct. 12 to much fanfare and praise from local politicians, including D.C. Mayor Muriel Bowser and Del. Eleanor Holmes Norton. Celebrities such as actor Kevin Bacon and his folk rock band, The Bacon Brothers, and Grammy Award-winning rockers the Foo Fighters helped kick off an action-packed opening weekend.

By its completion, The Wharf will boast 14 buildings — each built by a different architect — linked by 10 acres of parks and public space. In addition, developers PN Hoffman and Madison Marquette are restoring a 200-year-old fish market, creating 1,400 waterfront residences, setting up three unique hotels, designing a 6,000-person-capacity concert hall and conference center, and constructing four public piers. They’ll all be joined by a waterside promenade with more than 75 restaurants and shops extending along the banks of the Potomac River, not far from the National Mall.

The Metropolitan Police Department estimated that about 75,000 people visited The Wharf on its first Saturday in business, eating and drinking at one of the 20 restaurants that have opened so far and shopping at about 15 stores, such as a 2,300-square-foot Politics and Prose Bookstore and Harper Macaw, the first store of a local chocolate manufacturer. 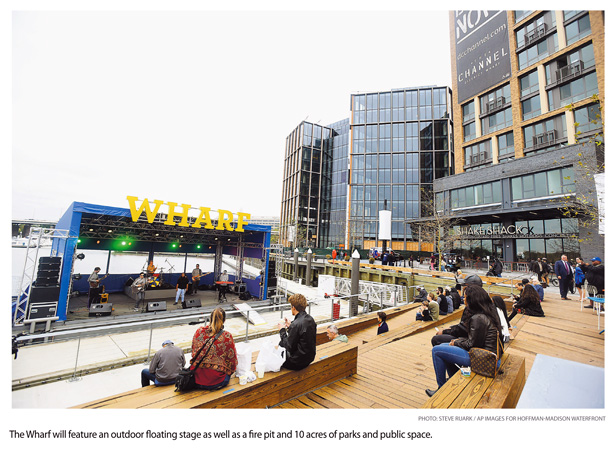 Other highlights of D.C.’s newest hotspot include the 57,000-square-foot Anthem concert and events venue, operated by Seth Hurwitz and I.M.P., which owns the District’s famous 9:30 Club. Upcoming performances include Bob Dylan on Nov. 14; Erykah Badu on Nov. 18; O.A.R. on Dec. 16; and the Killers on Jan. 10, 2018. To catch a more intimate performance, head to Pearl Street Warehouse, a pedestrian-friendly cobblestone street filled with open-air bars, restaurants and smaller music venues.

Visitors can get around by taking a new water taxi system that will connect The Wharf to other waterfront destinations, including National Harbor in Maryland, Alexandria in Virginia and Georgetown and Nationals Park in D.C.

The Wharf has four piers. The District Pier reaches 450 feet into the Washington Channel and is the neighborhood’s main outdoor gathering place, hosting festivals, international celebrations and holiday events. Recreation Pier extends from 7th Street Park and provides direct access to the water. Transit Pier, which offers water views on three sides, and Market Pier, where boaters can dock, round out the list.

Catering to Washingtonians who enjoy living in one of the fittest cities in the country, there are kayak and stand-up paddleboard rentals available at Recreation Pier, as well as DC Sail, the community sailing program of the National Maritime Heritage Foundation that offers sailing lessons, boat rentals or charter schooners.

Diners can also indulge. Renowned local chefs Mike Isabella, Kwame Onwuachi and Fabio Trabocchi will all leave their culinary mark on The Wharf. Also on tap: the Belgian bistro Florentijn helmed by Jan Van Haute, former chef at the Embassy of Belgium; Hank’s Oyster Bar by chef Jamie Leeds; and a mix of Italian, Mexican, Irish and American eateries.

It’s also got three hotels, including the 278-room InterContinental Washington D.C. – The Wharf; the 237-room Hyatt House; and the 175-room Canopy by Hilton, the first Canopy property in North America; along with 868 residences in four buildings.

The businesses that opened last month are the first part of a two-phase rollout. We spoke with Monty Hoffman, chief executive officer of PN Hoffman, a developer of The Wharf along with Madison Marquette, to find out what he thinks about the project so far and what we can expect down the line. 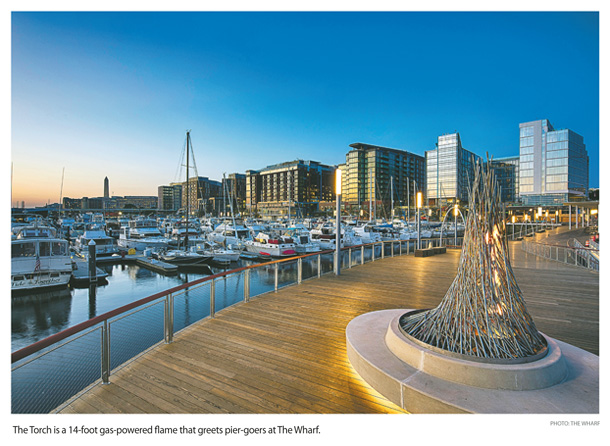 The Washington Diplomat: Congratulations on the opening. How are you feeling?

Monty Hoffman: It’s exciting to see The Wharf after all this time planning and executing to turn on a switch and now it’s open to the public. It’s very cool. I’m slightly numb, to be quite honest. Numb, excited and humbled really. It’s been a lot of collaboration with a lot of people — contractors, construction workers, the city itself coming in and helping, and then with the crowds and the programming that we had set up for four days was pretty intense. The market just really embraced it all.

TWD: How does The Wharf represent D.C.?

MH: The whole ethos behind the planning and design and curating of artisan-type retailers is all about Washington, D.C. It’s District DNA throughout. This is not a lifestyle center that you could go to in Cleveland or Denver or any other city. This is uniquely curated with best-in-class restaurateurs from our region as well as our retailers as well as public spaces that were designed for socializing. It is absolutely 100 percent the District’s waterfront.

The water taxi program that we put together helps to connect the DMV. Our first routes are to Old Town Alexandria, so they can get people here from Old Town Alexandria in 25 minutes, or vice versa. Same as connecting Georgetown by water to here with a new water taxi. Next spring we’ll be connecting National Harbor as well as the Yards [Park].

On the land side, we have shuttle buses that do very simple routes, and they’re free. If you’re on the National Mall or coming out of L’Enfant Metro, you can walk here [or] you can hop on a bus. We have apps that can be loaded from our website. The Wharf app provides you with many services and information, but it also provides you with the exact time that a shuttle bus will arrive where you are — same with a water taxi. It’s really intended to connect everybody in the region to come here.

The way we look at water, it’s almost magical. It brings people together. The Potomac River is our greatest natural resource in D.C., so we did everything we possibly could to embrace it. It also connects over to East Potomac Park, which is a phenomenal place for triathletes or those who are into fitness. It’s regularly used for bike training around its loop, it has an Olympic-size swimming pool in it, and of course there are a couple golf courses on it and, I think, 20 tennis courts. We have a free jitney, which is like a little ferryboat, that takes you over there and back.

TWD: Still, The Wharf is a unique neighborhood.

MH: We don’t really even look at it as a project. We look at it as a neighborhood. It’s almost like a village, actually, [and] the blocks, we call them mini blocks because they’re only about 270 feet long. They’re all cobblestone streets that connect this sort of grid between Maine Avenue and the water itself. 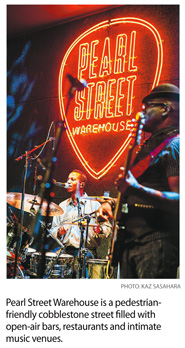 TWD: Twenty restaurants are part of Phase I, and I noticed there’s a lot of international flavor.

MH: That’s a very good point. That’s solid. We have Thai food, we have Mexican, we have Italian street food and Irish — just about everything, really, you can imagine. We have a sushi restaurant that will be coming in a few months.

TWD: So, what do you recommend?

MH: I’m not going to pick favorites because I love all of them. Certainly Del Mar might be the gold standard in dining. That [belongs to] Fabio Trabocchi and his wife, Maria. Del Mar is going to be a Spanish version of Fiola Mare [the Trabocchis’ Italian seafood restaurant in Georgetown]. It’s probably the best food experience in Washington, I would say.

If you want to watch a ball game or you want to visit with some friends low key, you could go to Kirwan’s Irish Pub. That’s an authentic Irish pub. Mark Kirwan brought over from Ireland all the millwork and then the craftsmen that put it together were flown in from Ireland.

We have Mike Isabella’s Requin, which is in the middle of District Square, and … it has really extensive drink menus and tapas — more Mediterranean food. It’s a fun place for socializing and people-watching. It’s actually next to a fire pit that’s toward the water, where a lot of people gather and you have a beautiful view of the water.

The fish market land site will be completed by June [2018] and that will be like its own village with a mini Eataly [Italian market], if you will, by Nick Stefanelli, [a Michelin-starred chef]. It will be an Italian market on the first floor, a restaurant on the second floor, a lounge on the third. We’ll have Todd Thrasher, who is probably the number-one mixologist in the region, opening up a rum distillery [Potomac Distilling Company], there, too.

TWD: How would you spend your ideal day at the Wharf?

MH: An ideal day for me would be to have breakfast at Pearl Street Warehouse, which is a really cool music venue, but in the morning is actually a diner. After that, I would be going out on my boat and come back to have probably early dinner and from there go to the Anthem. After that for me, I’m pretty much done.

TWD: You mentioned there’s more to come, including Phase 2. What can we expect?

MH: Phase 2 will have a fourth hotel that we’re adding. We’re in the final stages with a group we think we’ll be working with on that. Another half-million square feet of trophy office building plus another jewel-box office building — I call it jewel box but it’s about 60,000 square feet, which will be a nice, small, trophy-style iconic office. We will also have another apartment building, another condo building, another park that we’re building, which is right across from the Arena Stage, and then a couple more piers with buildings on them — one or two of them will be restaurants. We’re very much focused on the pedestrian experience, the whole neighborhood feel, so it’s a continuation of Phase I in that you can explore the entire one-mile waterfront with something different in every block.

TWD: It’s the holiday season. Any special events to watch for?

MH: It’s best to go on our website and look at our whole calendar. Every weekend we have something going on here. Through the winter we will have an ice skating rink that starts on Thanksgiving and goes all the way to March, and that ice skating rink is out on a pier in the water, which makes it really cool. We also have a couple fire pits with real wood where people can make s’mores.