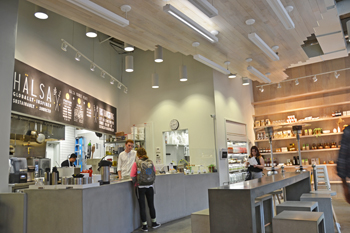 Ah, January — the first month of the year, and for many of us, a hopeful chance to cleanse the body of excess calories enjoyed during the holiday season.

We won’t mention any resolutions, but since it is January, The Diplomat is suggesting a few dining establishments in the Washington area that are attuned to healthy diets. It’s not hard to find nutritious, calorie-conscious eating options in and around the nation’s capital, but you do have to look for them. Since discovery is one of the best parts of eating out, we hope you’ll use this month to get out of your culinary comfort zone and try some places that not only please the palate but respect your health.

The word hälsa is Swedish for health and you’ll find plenty of well-prepared, affordable and healthy options at this bright and efficient eatery on the Catholic University campus in Brookland, a rapidly gentrifying neighborhood in Northeast Washington.

Hälsa, which is the Swedish word for health, serves calorie-conscious fare in a casual setting.

In reality, Hälsa is pretty much fast food with a setup that is reminiscent of a Chipotle. But thanks to a Nordic design aesthetic and the bright-eyed cast of college kids working the counter, it has a more pleasant and relaxing vibe. The eatery — owned by the proprietors of Bidwell, an upscale Southern restaurant in Union Market — serves breakfast, as well as lunch and dinner. It describes itself as “globally inspired and sustainably sourced.”

We started with soups: a pumpkin butternut squash and a bowl of pho. The squash soup arrived steaming hot and fragrant. Upon the first taste, it was clear this was a broth-based — not cream-based soup, which diminishes your calorie intake significantly. While it lacked the typically creamy texture, the flavor was strong and slightly peppery, with little flecks of fried sage adding a bit of earthy, autumn flavor. The more plentiful bowl of pho was also appealing, with daikon, shaved carrots, cilantro, basil and bean sprouts and flecked with chunks of grilled chicken sausage. Hälsa’s pho is a satisfying bowl of warm deliciousness, especially for $6.50.

The menu’s mainstay, dubbed the “market plate,” allows you to choose one protein — such as chicken breast, miso-glazed tofu or pan-seared salmon — and two sides. For our main course, we tried the salmon and the pulled pork. Tender and smoky-sweet, the pork seemed to lack any fatty skin — again shaving calories off of more traditional versions. We had a root vegetable puree on the side and were pleased with the choice. A combination of celery root, butternut squash and parsnip made for an appealing and hearty starch. The sharp-flavored celery root tasted especially fresh and gave the side an intriguing dimension.

The salmon — not quite the size of a full filet — was well-seared with a near-perfect consistency and vibrant color and smoky flavor. A fellow diner told us she ordered it regularly. We added grilled Brussels sprouts and braised red cabbage. The sprouts were well-seasoned if slightly oily, while the braised cabbage added an attractive shade of amethyst and a sweetness that offset the grilled, faintly salty flavor of the cabbage.

One other element of the Hälsa dining experience that sets it apart from other upscale, fast-casual restaurants: It serves several quality and fairly priced glasses of wine and offers craft beers on tap.

If you’d like to do more than just eat healthier in January, you might consider drinking to your health instead. Juicing, that is.

JRINK, launched by former World Bank financial analysts Jennifer Ngai and Shizu Okusa last year, bills itself as “the fresh-pressed solution for life-pressed people.” The idea is that Washington’s busy professionals can drink their meals — or at least some of their meals — on the go, cutting time and calories without sacrificing the things that give us energy and vitality.

“It’s a very efficient way to get your nutrients,” Ngai said during a recent tasting at the small chain’s Foggy Bottom location.

For example, if you want green leafy vegetables, JRINK allows you to skip the big, cumbersome salad. A 16-ounce bottle of Fuel Me Up No. 2 — filled with spinach, parsley, cucumber, broccoli, green apple and ginger — contains several salads worth of vegetables.

Or, if you’re feeling a bit toxic after a few too many libations, you might opt for Black Magic, which contains something called “activated charcoal,” as well as aloe vera water, grape and lemon. The end result tastes something like grape lemonade without a trace of charcoal flavor, thankfully. For what it’s worth, activated charcoal is already in a lot of water and air filters, and it works to draw out toxins by trapping chemicals. JRINK grounds it up so fine that it adds a tasteless yet detoxifying property to the juice.

JRINK’s juices and raw nut milks are $9 to $11 apiece. For those who want to go beyond the occasional healthy meal in a bottle, JRINK also offers three- and five-day cleansing plans, or “reboots,” priced from $165 to $265, including home delivery. Patrons can customize a three- or five-day plan in which they will ingest nothing except JRINK.

Health experts say such a regimen can help us refocus on what we put in our bodies and correct poor nutritional choices. If you’re looking to make a major dietary correction this month, JRINK could be a good place to start. 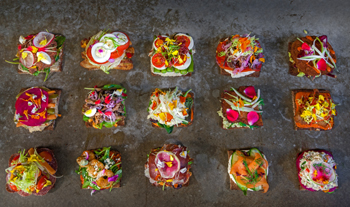 Finally, with more restaurants focusing on healthy options and even calorie counts for Washington’s hyper-driven and motivated fitness types, we want to mention a local favorite that is jumping headlong into the trend.

Ambar, a hip and tasty Balkan restaurant on Capitol Hill, has added calorie counts to its healthy new lunch menu, which debuted in late October. The menu features an array of soups and salads, as well as 15 open-face sandwiches served “European-style with a Balkan twist.”

Hälsa, JRINK and Ambar are just a few of many Washington restaurants that prove eating out does not have to be a nutritional disaster. Our waistlines salute them for it.