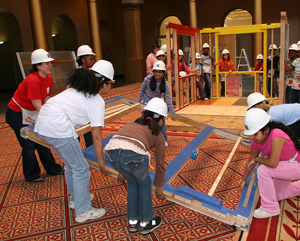 Summer is synonymous with fun, friends and a break from the routine of school — at least if you’re a kid. But many parents worry about summer brain drain, or essentially three months away from structured learning.

Washington-area camps offer a happy medium — preserving the storied fun associated with summer camp while offering continued education, much of it focused on areas that kids are drawn to and want to learn more about. The parks and recreation departments of most cities, counties and the District provide typical summer day-camp activities such as arts and crafts, sports and water play, but other offerings are narrower in their curricula (also see “Area Offers All Kinds of Camps to Keep All Kinds of Kids Happy” in the May 2012 issue of The Washington Diplomat).

Whether you, or your children, want a traditional experience with outdoor activities and field trips or something more specific such as language immersion or robotics, there’s a camp for that. Here’s a look at some, organized by category.

At the National Building Museum’s summer camp (401 F St., NW), kids ages 8 to 10 (entering grades three through five in the fall) will learn how buildings stand and why bridges don’t collapse, how to design furniture and public parks, and plan a city of the future. Electives include LEGO city building, terracotta tile making and designing with food. The camp runs for three two-week sessions from July 7 to Aug. 15 and costs $650 per session for museum members, $700 for nonmembers.

The National Zoo’s Summer Safari Day Camp (3001 Connecticut Ave., NW) provides a week of nature exploration for kindergartners through seventh-graders. Campers will examine animals by geography and habitat, learn about what they eat, learn how to care for them, and check out animals in the context of popular movies such as “Ice Age” and “Dr. Dolittle.” Sessions run from June 23 to Aug. 15 and cost $305 for zoo members and $382 for nonmembers for a four-day session or $380 and $475, respectively, for five days.

The Rock Creek Park Horse Center (5100 Glover Road, NW) lets adults and those as young as 4 years old practice their equine skills with demonstrations, hands-on barn activities and riding lessons. They also learn how to stay safe around horses and how to care for the animals. Prices range from $350 to $800 based on age level and session.

Lovers of the four-legged kind can do good and learn at the same time through the Animal Welfare League of Alexandria’s Summer Animal Camp (4101 Eisenhower Ave., Alexandria, Va.). Children in grades three through eight will learn about animal welfare and sheltering, local wildlife and careers with animals. The camp runs from June 23 to Aug. 29 and costs $250 per week.

The Académie du Français (5749 Governors Pond Circle, Alexandria, Va.) provides full-day French immersion camp for all levels of proficiency in June and July for $375. Each week focuses on a different theme, such as art, soccer and theater.

The International School of Languages (7906 Woodmont Ave., Bethesda, Md.) is offering a Spanish immersion camp program this summer for children ages 3.5 to 12. Campers practice the language through academic activities, songs, games, culture, cooking and outdoor play. Prices range from $200 per week for a half day to $330 a week for a full day. Camp runs from June 16 through July.

Kids and Culture Camp (33 Riggs Road, NE) was established in 2010 to introduce children to international affairs at an early age. Kids ages 3 to 12 will learn this year about Thailand, Southeastern U.S., Ghana and Puerto Rico through nature, music, history, language, art, science, math and literature. The weeklong sessions run from June 23 to July 18 and cost $170 each.

Circle Yoga’s Budding Yogis summer camp (3838 Northampton St., NW) is celebrating its 12th year of offering camp to kids who want to run and play but also spend time practicing yoga. A typical camp day includes mindful yoga and movement, arts and crafts, park playtime, camp games, relaxation and journaling. Camp counselors will create a yoga journal with pictures of the kids in the poses they learn to make practice at home easy. Sessions run June 23 to Aug. 22 and cost $250 per week for half days (ages 4 to 7) and $365 each for full days (ages 6 to 12). 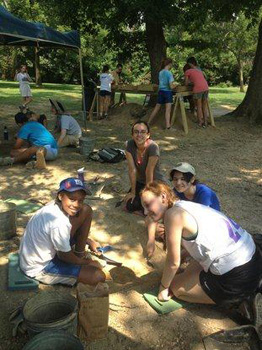 Dig archaeology? At the Alexandria Archaeology Summer Camp (105 N. Union St., Alexandria, Va.), offered by the city of Alexandria, kids ages 12 to 15 help archaeologists excavate a real archaeological site at Fort Ward Historical Park from July 21 to 25. The site is part of a former African American neighborhood that included a schoolhouse, church and homes. Children will wash and analyze their findings in the laboratory at the Alexandria Archaeological Museum in Old Town, and on the last day of camp, they will explain their work and discoveries to their families. The cost is $400.

At the C3 Cyber Club’s summer camp (44710 Cape Court #118, Ashburn, Va.), kids will learn about robotics, game design and programming. The club also has the latest games and gaming consoles for kids to use during breaks, and more than 20 plasma screens connect to Wii and Xbox 360 for campers’ use, too. The half-day SummerTech program is open to kindergartners through eighth-graders for $225 per week from June 16 to Aug. 29. The full-day camp, for the same ages, offers the same as the half-day program but also laser tag, field trips, twice-weekly trips to pools and water parks, gymnastics, mini golf, self-defense, indoor and outdoor sports, and 40-minute sessions dedicated to one-on-one math or reading practice. The cost ranges from $225 to $275 per week depending on camp length.

For kids who want just robots, there’s Infamous Robotics summer camp (4400 University Drive, Fairfax, Va.), where kids ages 7 to 12 can earn a robotics certificate while working in a lab at George Mason University. At Robotics Engineering Expansion Summer Camp 1 and 2, kids need no previous experience to learn electrical, mechanical and software concepts with a focus on electrical circuits; each child will build and test an electrical robot. In the 3 and 4 group for ages 8 to 12, students learn about motors, gears and torque in addition to programming a robot using C language. Each student will learn to build a robot and program it to accomplish a task. The camp runs from June 16 to Aug. 7 and costs $438 per session for level 1 and 2 and $610 per session for 3 and 4. 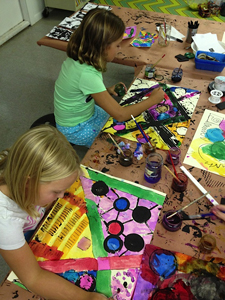 This year, Camp Creativity at the Corcoran College of Art and Design (500 17th St., NW) accepts preschoolers as young as 3. Offered at four locations in D.C., students are exposed to traditional and contemporary art in addition to artists from various time periods and homelands. Kid Pan Alley is the final weeklong session for 5- to 16-year-olds where students participate in a songwriting workshop. The costs start at $250 per session.

Bach to Rock, a soon-to-be nationwide music and voice school, offers music camps for ages 4 and up at its eight area locations, including Bethesda in Maryland and Herndon and McLean in Virginia. Options include Rock Band, which places students in a band depending on age and skill level. Weekly sessions end with a public performance and the recording of a CD. Other camp subsets teach students how to record a demo and set up a press kit, how to be a deejay, and how to use mixing technology. Camp dates and costs vary by location and program.

Budding ballerinas can train at the Metropolitan Ballet Theatre and Academy’s camp (10076 Darnestown Road, Suite 202, Rockville, Md.). Open to ages 4 to 18, students will learn about more than ballet, however. Jazz, hip hop, modern and international dances are also covered. The price starts at $120 per week for the littlest dancers and peaks at $395 per week for the more advanced. Camp runs from June 16 to Aug. 22. 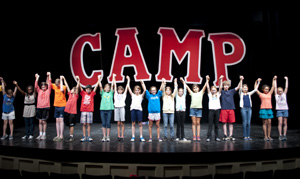 If your child is destined for stage and screen, consider Camp Shakespeare at the Shakespeare Theatre Company. The $725 two-week sessions (available June 16 to Aug. 9) plunge fans ages 7 to 18 into all things Bard. Actor wannabes work to understand Shakespeare’s plays and develop acting skills using voice, movement and improvisation work. Each session ends with a performance for family and friends.

A popular type of camp is a sleep-away one, but your kids don’t have to go far to get the experience. Camp Horizons (3586 Horizons Way, Harrisonburg, Va.) is situated in the Blue Ridge Mountains only two hours from D.C. and accepts kids ages 6 to 17. Activities at this coed camp include aquatics, outdoor adventures, horseback riding, and performing and visual arts. Camp runs from June 22 to Aug. 16. The price for one week is $1,150; for all eight weeks, it’s $7,500.

For kids ages 11 to 19 with a bit of wanderlust, there’s the ultimate sleep-away camp: CISV International Summer Travel Program (formerly Children’s International Summer Villages). Eleven-year-olds participate in a four-week-long Village program, which consists of a delegation of two boys and two girls who meet representatives from 11 other countries at a campsite somewhere in the world. Activities at the campsite include games, music and crafts, but each delegation also makes a presentation about its culture on National Night. Other perks include a home stay with a family in the host nation.

Options for older kids include the three-week Step Up program and Interchange, an exchange of four-week-long home visits in two consecutive summers. The objective of all the programs is to foster an understanding of and interest in different cultures. This year, Village will meet in Cebu, Philippines; Tromsø, Norway; or São Paulo, Brazil, depending on the dates (June 27 to July 31). Step Up will meet in Trondelag, Norway, or Lisbon, Portugal (June 20 to Aug. 16). Interchange will take place in Graz, Austria, between July 2 and 31. Each level costs $3,075.