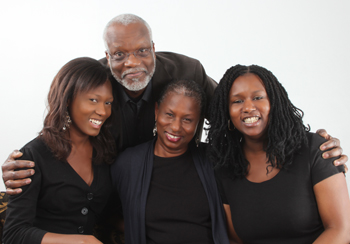 As a consultant and economist, Sylvia Charles has traveled throughout the Caribbean, advising governments on ways to boost economic development while preserving their countries’ natural resources. Each step of the way, she has followed her husband, Dominican Ambassador Hubert John Charles, throughout his long career with UNESCO, the U.N. agency charged in part with protecting World Heritage Sites around the globe.

Perhaps that’s why Sylvia Charles views the Caribbean as more than just a sunny tourist destination, but as an environmental treasure that must be respected. That includes Dominica, a small island of just over 70,000 people located in the Lesser Antilles chain above the Venezuelan coast.

“We are the ‘nature island’ of the Caribbean,” she proudly said. “We have a very lush country … with one of the highest rainfalls in the world.

“We have fewer people than any other Caribbean nation,” added Sylvia, a native of Antigua who has called Dominica home for years. “We take care of our environment, including our forests. The area is pristine and we cherish our national parks.”

Dominica has three national parks, including Morne Trois Pitons, a World Heritage Site, and Morne Diablotin, which was created in 2000 primarily to protect the habitat of the endangered Imperial Amazon parrot, also known as the Sisserou, Dominica’s national symbol.

“This island is very careful about how it is developed,” said Sylvia, a mother of two and grandmother of three. “Dominica promotes eco-tourism based on its lush vegetation, rivers, flora and outdoor spas. The services sector — including tourism, private education and other business services — is the main foreign exchange earner.”

The island, a British Commonwealth, has successfully developed an offshore medical education sector while promoting itself as an ecotourism destination. The government is also working to build its offshore financial services and harness its geothermal energy resources.

“There is geothermal potential and production wells are being constructed,” Sylvia explained. “The intention is to supply the domestic market as well as to export energy to neighboring countries.”

Sylvia is intimately familiar with many of those countries, having worked with them throughout her career. Among her positions, she was a macroeconomist/planner at the Grenadian Agency for Reconstruction and Development; chief technical officer for the Dominican Ministry of Trade, Industry and Tourism; and research fellow at the Institute of Social and Economic Research at the University of the West Indies.

Early in his career, her husband was a permanent secretary in the Dominican Ministry of Education and president of Dominica State College. He also worked for UNESCO for nearly 20 years until coming to Washington in 2010 for his first-ever ambassador posting.

With grown daughters, it’s now easier for Sylvia to travel as a consultant. While in Washington, she has returned to Dominica and Grenada for consulting assignments. Over the years, this seasoned economist has also been hired by St. Lucia, Antigua, Botswana, South Africa, Mozambique and Nigeria for advice on sustainable economic development and other matters. As her husband traveled for his UNESCO postings, she found a job pertaining to each location’s economy wherever they lived.

“Once, while we were sent to South Africa by UNESCO, our older daughter Kaia stayed home in Dominica to finish her IB [International Baccalaureate degree]. She stayed with a very good friend. Otherwise, the whole family relocated with my husband,” Sylvia told us.

Their girls are now grown and on their own. Older daughter Kaia, 34 — whose name is Ghanaian and means “lovable” — lives in London with her two children and works for the Victoria and Albert Museum. Shani, 32, works in Dominica’s Ministry of Education and has one daughter.

Education runs in the family. When Sylvia was young, she was attracted to numbers and anything even faintly related to economics. “Economics is what makes a country tick,” she said. “It is about scarcity and want and the allocation of resources among competing alternatives to promote growth and development and ultimately employment and income creation.

Meanwhile, her husband earned a bachelor’s in history and economics at the University of the West Indies — where the two met — and a master’s in Atlantic history and culture from Johns Hopkins University in the United States. 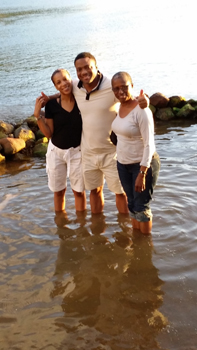 Sylvia says part of their jobs now is teaching Americans about their island nation, which many people confuse with the Dominican Republic, located northwest of Dominica. “A lot of people get us mixed up but we are very different. We are much smaller with only 290 square miles and only 71,000 people,” she said.

To promote its volcanic peaks, waterfalls, rainforest canopies and other natural wonders — including the 115-mile Waitukubuli National Trail, the longest hiking trail in the Caribbean — Dominica held its annual Nature Island Challenge last month. Teams from different countries are invited to compete in the one-of-a-kind challenge, in which they race across Dominica, talking with islanders and experiencing local sports and culture.

The tourism campaign is intended to diversify Dominica’s economy, which has long been dependent on agriculture, primarily bananas, the country’s main export.

“Banana production has declined because of the removal of the preferential marketing arrangements with the United Kingdom,” Sylvia explained. “More recently, a leaf-spot disease — Black Sigatoka — has affected the industry. The government is promoting the diversification of the agricultural sector and the expansion of coffee production and processing,” she said, noting that several natural water sources are also being tapped for bottled water.

“There is a variety of manufactured items, but most are small scale,” she continued. “Soaps constitute the largest manufacturing export. A factory formerly owned by the government is now owned by Colgate Palmolive. There are also cottage-type soap-making operations. Dominica exports essential oils, sauces and paints.”

In 2003, the government began a comprehensive restructuring of the economy, including the elimination of price controls, privatization of the state banana company and tax increases, in part to meet IMF demands.

“We need more investments in order to retain our young people,” Sylvia said, noting that many college-age students go to other countries, set down roots and don’t come back.

For her part, while her home is Dominica, Sylvia is enjoying life in the Washington area and is busy with events showcasing her island.

On May 3, Dominica, along with the Embassy of St. Kitts and Nevis, will welcome guests to the historic Fraser Mansion, now run by the National Affairs Office of the Church of Scientology, as part of Passport DC’s annual day of embassy open houses known as the Around the World Embassy Tour. The embassy building that Dominica shares with St. Kitts on New Mexico Avenue is being refurbished, so both countries are working from rental space in Rosslyn, Va., and hold occasional events at Fraser Mansion.

But she also enjoys slowing down from diplomacy to work in her garden and practice yoga every day she can.

Because the couple lives in Germantown, Md., she sometimes comes into D.C. with her husband and keeps her own schedule for the day. She and her husband also love to go to the ballet (“our daughter danced for a long time,” she said) and all types of performances and art shows. “You have such a rich cultural life in Washington — you can’t get bored here,” Sylvia said. “There is so much to do.”