Home The Washington Diplomat May 2014 Expansive Visions of Africa 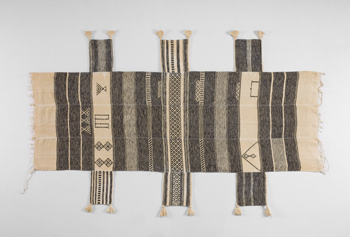 A hammock by the Mende people of Sierra Leone is among 70 artworks in “Visions from the Forests: The Art of Liberia and Sierra Leone.”

A far-reaching picture of Africa — both from an outsider looking in, and traditional objects from within — emerges at the National Museum of African Art with two major exhibitions that run until August.

“Africa ReViewed: The Photographic Legacy of Eliot Elisofon” is the first retrospective in 40 years of the well-known Life magazine photojournalist, who captured the people, culture and landscapes of Africa. Elisofon (1911-73) is remembered as the first photographer to popularize post-World War II images of Africa and its leaders in the American media.

Both shows have their roots in the dedication of art collectors: “Art ReViewed” celebrates the 40th anniversary of the vast Eliot Elisofon Photographic Archives that Elisofon bequeathed to the National Museum of African Art, while “Visions” hails from the collection of William Siegmann (1943-2011), a former curator of African art at the Brooklyn Museum who lived and worked in Liberia from 1965 to 1987.

Among the many pieces Siegmann collected during his time in Liberia were objects used in men and women’s initiation ceremonies; jewelry and other items made of cast brass and horn; small steatite figures dating from the 15th to 18th centuries; and woven and dyed textiles. On display, for example, are horn prestige objects inscribed in Arabic and Vai, a rarely illustrated indigenous script from Liberia. The exhibit will also emphasize connoisseurship and the identification of objects to particular artists or workshops in an effort to counter the anonymity often associated with traditional African art.

Just as Siegmann forged a deep connection with the artists whose work he avidly collected, so too did Elisofon form a lasting bond with the continent he chronicled in stunning detail and vibrancy. From 1947 to 1972, Elisofon undertook 11 expeditions to Africa and produced five photo feature stories for Life. He pioneered color photography in the 1950s and directed and produced motion picture films and television programs on Africa during the 1960s and early 1970s. The Fordham University graduate also collected hundreds of objects of African art over his lifetime.

Elisofon bequeathed this expansive collection of African art and photography — including more than 700 works of art, 80,000 color slides, negatives and photographs, and 120,000 feet of motion picture film and sound — to the Museum of African Art.

“More than any other photographer of his time, Eliot Elisofon shaped American perceptions of Africa during the mid-20th century,” said Amy Staples, the museum’s senior archivist. “He focused his camera on traditional cultures as well as emerging artists and leaders during a time of major transition and independence movements in Africa. His photographs and art collection contributed to what became the National Museum of African Art.”

“Africa ReViewed: The Photographic Legacy of Eliot Elisofon” runs through Aug. 24 and “Visions from the Forests: The Art of Liberia and Sierra Leone” runs through Aug. 17 at the National Museum of African Art, 950 Independence Ave., SW. For more information, please call (202) 633-4600 or visit http://africa.si.edu.

Anna Gawel is the managing editor for The Washington Diplomat.