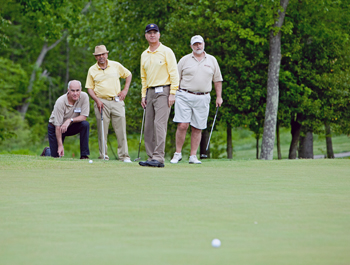 Who says you can’t mix work with pleasure? The Washington Diplomat has been successfully doing it for eight years at its annual Embassy Golf Tournament, offering the diplomatic community a much-needed break from the Beltway grind.

The tournament, held this year on May 4, regularly attracts more than 150 participants for a leisurely game of golf at Cross Creek Golf Club in Maryland. Ambassadors, diplomats, members of Congress, U.S. government officials and business leaders also enjoy a sun-filled day (eight years in a row — thanks to the weather gods) of networking, international culture, fabulous food, and tons of high-end prizes and goodies.

Above all, the Embassy Golf Tournament offers participants a chance to relax and drop their diplomatic guard. Embassy teams deck out their golf carts with their national flags or proudly don their national colors in the friendly competition.

In addition to embassy representation by nations ranging from Britain to Laos to Zimbabwe, various businesses and corporations have generously supported the tournament over the years, including this year’s sponsor Visa, as well as the Willard InterContinental hotels, Johns Hopkins Medicine and Royal Air Maroc.

Dozens of ambassadors have also attended over the years, with Moroccan Ambassador Rachad Bouhlal, an avid golfer, serving as this year’s honorary diplomatic host. Past hosts have included envoys from Canada, South Africa and Kazakhstan. Bouhlal was joined by fellow ambassadors such as João Vale de Almeida of the European Union, Ali Aujali of Libya, John Beale of Barbados, Hem Heng of Cambodia, Gudmundur Arni Stefansson of Iceland, and many others. 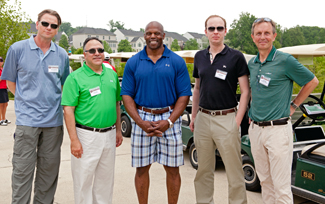 From left, Stefan Gudjohnsen of Globescope, The Washington Diplomat Publisher/Editor in Chief Victor Shiblie, former outside linebacker for the Washington Redskins Ken Harvey, Gerhard Olsen of Merrill Lynch, and Ambassador of Iceland Gudmundur Arni Stefansson attend the lunchtime cookout prior to the start of the tournament.

In fact, the winner of this year’s tournament was a seasoned pro: Erlan Idrissov, ambassador of Kazakhstan, who took the top score honors along with his foursome teammates: Jason Yuan, head of the Taipei Economic and Cultural Representative Office, U.S. Rep. Dan Burton (R-Ind.), and Douglas Paal, vice president for studies at the Carnegie Endowment for International Peace.

Another tournament veteran won for being closest to the pin for women, receiving a rejuvenation session at Millennium Medical Spa: L.E. Bhutto, Nigeria’s ambassador to Cuba, who regularly flies in to play in the annual competition.

Other awards and prizes included a stay at the State Plaza and Fairfax at Embassy Row hotels, aged rum donated by the ambassador of Barbados, an iPad and a 42-inch flat-screen LCD television. But the ultimate raffle freebie was two trips to Morocco courtesy of the embassy and Royal Air Maroc, with luxury accommodations at the Mamounia Hotel in Marrakesh and Palais Faraj Suites & Spa in Fez.

The lucky recipients: Angelique Rutledge of the Netherlands Embassy and EU Ambassador João Vale de Almeida, who won after two other raffle numbers were called but the participants had just left. Lesson to be learned: Always stay till the end of the party when prizes are involved.

At the conclusion of the dinner reception, Ambassador Bouhlal even suggested holding next year’s Embassy Golf Tournament in Morocco — a suggestion we’re quite tempted to take him up on!

Anna Gawel is managing editor for The Washington Diplomat and a columnist for the Diplomatic Pouch.