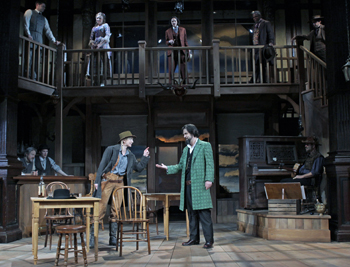 Kate Eastwood Norris as Katherine, above left, and Cody Nickell as Petruchio square off in a Wild West take on Shakespeare’s “The Taming of the Shrew.”

Staging Shakespeare’s “The Taming of the Shrew” for modern audiences (in this case, anyone born after the witch trials in Salem) can prove to be “tricky,” at best, admitted award-winning director Aaron Posner of the Folger Theatre. A play that can be construed as glorifying misogyny by its theme, and even its title, makes audiences, at best, uncomfortable.

So what is Posner to do? He cleverly does the following: He turns the script into a parody, which beefs up its comic character and tones down the unfortunate portrayal of life for oppressed Elizabethan women.

Posner plunks down his cast of crazy characters and plotlines into the Wild West, where swarthy, drunken, lusty, power-hungry men are handsome, brave and heroic, while their meek, obedient women are the backbone of a blossoming America. How can any true-blooded American get seriously bothered by the political incorrectness of a Western?

Staging “Shrew” as a Western is not a novel idea; it’s been done before for logical reasons.

“The mythological ‘Old West’ was a place where power and money ruled. And law was still … flexible,” explained Posner. “The Wild West of gunslingers, shootouts, stampedes and cowboys is deep in our national psyche. I find a lot of that wonderful, mythic, rough-and-tumble spirit in this play.”

It does work well in the Bard’s quintessential battle-of-the-sexes comedy, as the spirited Katherine, i.e. the “Shrew,” is “tamed” by Petruchio, who has agreed to woo and marry Katherine as a favor to his old friend Hortensio, who in turn is in love with Bianca, Katherine’s younger and more popular sister.

Posner ups the ante in the Folger production with the original compositions of singer-songwriter Cliff Eberhardt, who’s been twanging out his soulful and bluesy guitar solos since the 1970s. Eberhardt plays the Blind Balladeer, fixed at the piano in the back of a bar room, who serves the role of a Shakespearean chorus that comments and narrates the plot and character emotions. Here’s a sample of his editorializing in verse: “I need a little kick/I need a little bite/I need a little push/And I need a little shove/Or it doesn’t really feel like love.” Not exactly the Bard’s poetry, but it does the job.

Besides adding a character to the play, Posner takes other licenses by using a little gender-bending in the casting — a staple of Shakespeare’s works.

Posner recasts the role of Bianca and Katherine’s mild-mannered father Baptista into their whiskey-chugging, shotgun-wielding mother, hilariously played by D.C. funny woman Sarah Marshall. This makes sense given that Posner molds sharp-tempered Katherine into an aggressive Annie Oakley type who follows in her mother’s forceful footsteps while engaging in a major power play with her. When all other characters pull out their pistols to stage a duel, Baptista trumps them all with an unwieldy rifle. 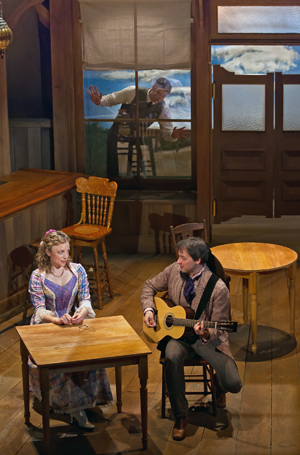 Tranio, who is traditionally cast as the male servant to Lucentio, Bianca’s wealthy suitor, is played by the talented Holly Twyford, who later disguises herself as Lucentio and convincingly swaggers around the stage in a mustache and smart suit.

Posner’s gender play ingeniously parallels Shakespeare’s role reversals at the play’s end where Katherine becomes obedient and Bianca turns ornery. This begs the essential question: What does one’s gender really mean and how should it dictate behavior?

The leads are played by real-life married partners Kate Eastwood Norris, as explosive Katherine, and Cody Nickell, as her betrothed, mad man Petruchio. They have, as can be expected, an instant physical and emotional chemistry on stage, and manage to pull off the impression of true affection between the characters by the play’s end. Tall, statuesque, blond Norris makes a feisty and imposing Katherine, who is given to not only anger management problems but a depression witnessed in the beginning of the play when she’s drowning her sorrows in a whiskey bottle. Handsome, mustached Nickell is her convincing match as the macho Western bruiser known as Petruchio.

The rest of the cast is well rounded. Southern-drawled and humorous Danny Scheie is Grumio, Petruchio’s trusty, flamboyant servant. Craig Wallace commands the stage in his smaller role of Gremio, a wealthy, elder suitor to Bianca. And Sarah Mollo-Christensen makes for an angelic and diminutive Bianca.

The play’s Wild West theme was inspired by the HBO series “Deadwood,” which is aptly reflected in Tony Cisek’s 1800s-era tavern set. Petruchio makes his entrances by busting through swinging saloon doors, Bianca and her suitors canoodle on the floor behind a well-stocked bar, dowry deals are clinched chugging moonshine on bar stools, and a would-be husband of Bianca’s tumbles down a long, wooden staircase after a drunken brawl. All of the action takes place beneath a monstrous chandelier decorated with antlers.

A fine balance between frontier motif and Elizabethan threads is found in Helen Huang’s costumes. Western cowboy boots, vests, holsters and hats accompany Shakespearian feathers, lace, gowns and ruffles. This mix is emphasized in Petruchio’s gift to Katherine of an exquisite Elizabethan gown accented by riding pants and cowboy boots and hat.

Shakespeare traditionalists could argue that the Western genre overpowers the Bard’s delicate and heady poetry and nuances. They’re right insofar as this theme eventually wears itself out like a well-worn joke. But all in all, the similarities of the two worlds — one in early England and the other in early America — are great enough to warrant their union in this rousing, ambitious and entertaining endeavor.

The Taming of the Shrew