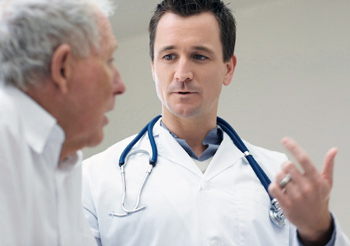 For several years, one of the hottest debates in cancer screening has been the value and validity of the prostate-specific antigen (PSA) test. PSA is present in the blood serum of all men, but is often elevated with prostate cancer.

But the reliability of this test as a screening tool for prostate cancer has been problematic. Last month, the U.S. Preventive Services Task Force (USPSTF) upended two decades of fairly standard medical practice by concluding that healthy men of all ages should no longer undergo routine PSA screening, saying that such testing doesn’t actually save lives and can even harm them.

The group found that routine screening can at best help save the life of 1 in 1,000 men but is far more likely to lead to unnecessary biopsies and other tests, and even needless overtreatment of slow-growing, indolent cancers that may never have posed a real threat. (Surgery and radiation for prostate cancer pose the risk of incontinence and impotence.)

In fact, the task force, which analyzed several large studies, found that up to 43 men for every 1,000 tested will face serious risks, with 30 to 40 developing incontinence or erectile dysfunction, or both, as a result of treatment. In addition, for every man saved by PSA screening, two more men will experience a serious cardiovascular event such as a heart attack because of treatment, and one man will develop a life-threatening blood clot in his legs or lungs.

The findings reinforced draft recommendations issued last October by USPSTF, but they still sent shockwaves throughout the medical community.

So, are many men and their doctors giving up on the PSA test? Hardly. In April, finance wizard Warren Buffett announced that he had been diagnosed with stage I prostate cancer after a screening test — a test that some experts have said he need not have undergone in the first place. At 81, Buffett is much more likely to die of some other cause well before a stage I prostate cancer poses any threat, but he has nonetheless begun undergoing radiation therapy for the disease.

Buffett isn’t alone. In a study published in a letter in the April 25 issue of the Journal of the American Medical Association, investigators from the University of Chicago Medical Center and UCLA found that nearly half of all men over 75 receive PSA screening tests, even though this age group is least likely to benefit from the testing.

The USPSTF had recommended against regular PSA screening for men over 75 as far back as 2008. But between that year and 2010, the number of older men receiving PSA tests actually increased—from 43 percent to 43.9 percent.

Coincidentally, a related study appeared in the April 19 online edition of the journal Cancer. A survey of doctors in the Johns Hopkins Community Physicians Group found that only about half agreed or strongly agreed with the draft guidelines on PSA screening.

Those studies were released prior to the recommendations by USPSTF that were published online May 21 in Annals of Internal Medicine. Still, resistance to change remains widespread.

“Change is hard,” Dr. Michael L. LeFevre, co-vice chairman of the task force and professor of family and community medicine at the University of Missouri, told the New York Times. “It’s hard for all of us, both within and outside the medical profession, to accept that not all cancers need to be detected or treated, and that there are harms associated with screening and not just benefits.”

This reaction echoes the backlash among many ob-gyns and breast cancer experts to similar recommendations issued by the USPSTF regarding mammograms for women between the ages of 40 and 50. In 2009, the task force issued a recommendation against the longstanding practice of baseline mammograms at age 40 and suggested that routine screening mammography should only start at age 50. (Somewhat less reported but equally controversial, they also recommended against teaching women breast self-examination.) Reports since then suggest that the new recommendations have confused women and their doctors rather than being seen as helpful.

So are the new PSA guidelines correct, or will they too cause more confusion? Some prostate cancer experts agree with the guidelines, but others point out that the USPSTF incorporated the results of three randomized clinical trials that did not demonstrate any benefit for PSA screening, while ignoring at least one significant trial — the European Randomized Study of Screening for Prostate Cancer — that did show a benefit, indicating that PSA screening cuts prostate cancer deaths by 20 percent.

In February, the debate made the pages of Cancer Epidemiology, Biomarkers & Prevention, as two leading voices in prostate cancer argued a point-counterpoint on the new draft recommendations. Richard Ablin, professor of pathology at the University of Arizona-Tucson and the original discoverer of the PSA marker, came out in support of the task force guidelines, writing that the “controversy and debate of PSA screening were predictable from the onset and should have never in all actuality occurred, nor should have the tragedy of the resulting overdiagnosis and overtreatment in excess of a million men in the United States.”

On the opposite side, Dr. William Catalona, professor of urology at the Northwestern University Feinberg School of Medicine, writes, “Nearly all urologists and most internists support PSA screening, but because of extensive media coverage, a change in clinical practice is likely and fewer patients will opt to be tested.” He further notes that PSA screening “is the best screening test we have for the early diagnosis of prostate cancer; for now, no other way to identify prostate cancer in its curable stages exists.”

While it’s too early to tell, the take-home for both prostate and breast cancer screening may well be that risk for these relatively more common cancers, particularly among people who don’t fall into known high-risk groups (like women with a strong family history of breast cancer), is a very individual thing, and you really can’t make decisions about the kind of screening that’s right for you based solely on blanket recommendations from a large, nationally focused group.

Don’t ignore the guidelines, but don’t make them your sole deciding factor, either. Some men may be much more afraid of a slight risk of developing cancer than they are of impotence or continence problems; other men might feel exactly the opposite. When considering any screening test like this, your best starting point is to talk in detail with your doctor and try to come to a decision that feels right for you.