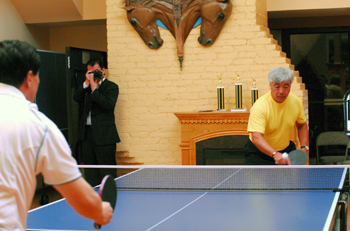 Zhang Yesui was only 18 years old back in December 1971, when two daring athletes — one Chinese, one American — inadvertently ended up arranging the first-ever table tennis match between their two then-hostile countries.

That led to President Richard Nixon’s historic trip to China, and ultimately to the 1979 establishment of diplomatic relations between Washington and Beijing that endures to this day.

On Feb. 25, Asia’s time-honored tradition of “ping-pong diplomacy” took on a whole new meaning when Zhang and fellow diplomats representing the neighboring countries of Kazakhstan and Russia converged on the Kazakh Embassy to anoint a local ping-pong champion.

The formal-sounding “Kazakhstan-China-Russia Table Tennis Friendship Tournament” was anything but. The host team donned bright yellow “Kazakhstan” T-shirts that quickly became soaked in sweat; the Chinese wore red. In between action-packed games, these weekend warriors quenched their thirst with ice-cold Stella Artois beer and snacked on Costa Rican bananas and gala apples from Washington state.

Matches were played old style, with one game played to 21 winning points, with a two-point difference at the tie break. Singles and doubles matches consisted of one game each, and each match was judged by a member of the team not playing. 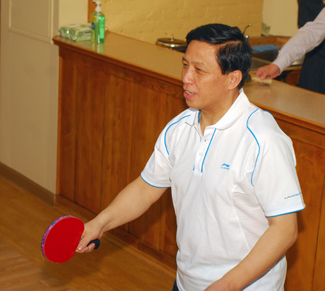 Chinese Ambassador Zhang Yesui, above, was only 18 years old in December 1971, when a Chinese and American athlete inadvertently ended up arranging the first-ever table tennis match between their then-hostile countries.

The fast-paced tournament was held on the fifth floor of the Kazakh Embassy mansion fronting 16th Street, in a small room with vaulted ceilings that’s dominated by a double horse head sculpture donated by an artist from Alabama, of all places. On the walls surrounding the two tennis tables were large framed color photos of Kazakhstan’s historic old capital city, Almaty, and its shockingly modern new one, Astana.

“A diplomat’s job is usually about meetings, officials and papers, but very little physical activity,” Kazakh Ambassador Erlan Idrissov told The Washington Diplomat in between sets. “There’s a wise saying in Chinese that says to be healthy, one should walk at least 10,000 steps a day. That’s why I think other ambassadors and diplomats in Washington should be doing more sports, and ping-pong is a fantastic game — seemingly very easy, but actually very demanding.”

“Sports is very popular in China, but thanks to economic development, more and more people can now afford expensive sports like golf and tennis. Not many young Chinese play table tennis these days because there are other choices,” Zhang told us, confiding that of the 200 or so staffers at the sprawling Chinese Embassy here, only a dozen play ping-pong regularly. “Most of us ambassadors stationed in Washington hardly have any time to mingle with other ambassadors.”

On this particular Saturday afternoon, the diplomats’ attention was focused not on the war in Afghanistan, or Iran’s nuclear buildup, or the recent U.N. Security Council resolution imposing economic sanctions against Syria that was vetoed by both China and Russia — but on the fierce ping-pong battle being played out among three teams representing the world’s largest, fourth-largest and ninth-largest countries by size. 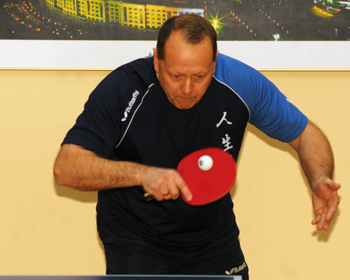 Russian Embassy Attaché Vladimir Krasavin competes for the Russian team at a ping-pong tournament held at the Kazakh Embassy.

Some 30 family members and other invited guests watched for several hours as China’s versatile Zhang and his four-man team crushed similarly sized teams led by Idrissov and Russian Embassy Attaché Vladimir Krasavin. As Idrissov explained, “the Russian ambassador couldn’t come, and besides, he doesn’t play ping-pong.”

On the contrary, said the 59-year-old Zhang, “I started playing ping-pong at the age of 12 or 13, at my middle school in Wuhan province.”

The final score — China (12), Russia (4) and Kazakhstan (3) — should have surprised no one. Since 1959, Chinese players have won the men’s World Table Tennis Championships 60 percent of the time; in the women’s division, Chinese players have won all but three of the World Championships since 1971, and ping-pong was a big draw during the 2008 Summer Olympics in Beijing.

Yet Kazakhstan’s Idrissov can take heart in at least one thing: Even if his country doesn’t produce the world’s best ping-pong players, it’s an undisputed champion when it comes to vodka.

After the lavish Kazakh-style buffet dinner following the tournament, Idrissov handed each of his guests a goodie bag containing, among other things, a 750-ml decorative bottle of potent Snow Queen. This rare spirit, named “Top Vodka” at the 2008 San Francisco World Spirits Competition, sells for $70 a bottle and is the international winner of 10 gold, seven silver and eight bronze medals for excellence — a spirited end to a long day of hands-on diplomacy.