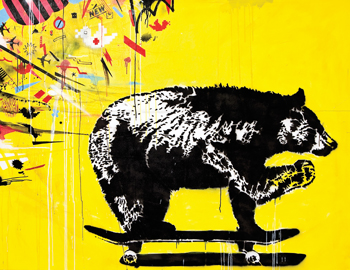 Just inside the glass front door of a skyscraper in D.C.’s business district is a large photo of a woman dressed in native South American clothing. With her long dark hair gathered in a simple braid, she’s frozen with her melancholy eyes cast downward, hands pensively crossed before her midriff and toes covered in sand.

At first glance, the photo seems warped in mystery. The lone woman is standing on loose sand with mirror tiles in the background reflecting a barren field. A broken wooden wheelbarrow juts out of the mud in the distance.

But there’s a history to the image, simply dubbed “The Uruguayan Woman Project.” The photo has a back-story that, once told, unravels a perplexing piece of art.

The Inter-American Development Bank (IDB) Cultural Center this spring shines a light on contemporary art from Uruguay to honor the country, whose capital of Montevideo hosted the IDB Board of Governors 53rd annual meeting in March. Spotlighting the bank’s host country is an annual tradition at the cultural center, which celebrates its 20th anniversary this year.

The exhibit, “Contemporary Uruguayan Artists,” features art that challenges viewers to not only grasp the meaning behind some of the enigmatic works, but also contemplate what they say about Uruguay, one of South America’s most prosperous nations, economically and socially. The country of 3.5 million people differs from many of its neighbors in other ways as well.

“Uruguay is even more contemporary than most of the rest of the region because it grew without the weight of the pre-Columbian and colonial traditions found elsewhere and because the country has always been permeable to foreign influences,” wrote Luis Alberto Moreno, IDB president, in the exhibition catalogue. “Its art, therefore, is an art of assimilation, the product of a society distinguished by assimilation, in which foreign currents are steadily but selectively incorporated.”

Take, for instance, “The Uruguayan Woman Project.” Created by Uruguayan artist Jacqueline Lacasa (the woman depicted in the photo), the work plays on the fame of Uruguayan Juan Manuel Blanes’s painting from 1879 called “The Paraguayan Woman.” 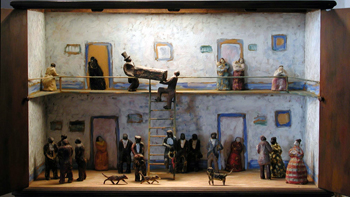 The well-known older work depicts a woman draped in identical indigenous garb and standing in the exact same pose on a similar landscape. That wrecked wheelbarrow also sits idly in the backdrop. But in the older image, the woman is surrounded by dead soldiers —casualties of the Paraguayan War, which killed a large portion of the male population.

Alluding to the old painting, the contemporary image connects women of the 21st century with those from that darker time through a shared sense of loss and solitude. Even without the surrounding graveyard of bodies, the Uruguayan woman seems despondent, disoriented, and etched with a pang of vulnerability that Lacasa deftly captures.

The work is one of 17 in this display — including paintings, installations, photography and mixed media — which is part of the World Bank Art Program’s exhibition series “About Change: Art from Latin America and the Caribbean.” The yearlong collaboration between the World Bank, IDB and Organization of American States, broken up and housed in different venues throughout the city, aims to highlight “the opportunities, the challenges, the values and the hopes of these regions,” according to a release.

Marina Galvani, the World Bank Art Program’s curator, wrote that the works in the IDB gallery have more in common than just showcasing Uruguay and its and contemporary art scene. They also reflect a sentimiento triste, a sense of sadness.

“Uruguay, like the rest of Latin America, has reason to celebrate. In the global economy the region is growing and showing signs of reverse migration. But artists are moral commentators and often harsh critics,” Galvani wrote. “As such, the works clearly express the social and moral collapse of the middle and upper-middle classes, employing in some cases irony, in others, a sympathetic touch. They also reflect delicately — even poetically — on many global subjects, such as the environment, consumerism, and urban decay.”

Cristina Rossi, a Latin art professor from the University of Buenos Aires, observed that the works “grapple with the construction of memory — personal, national, regional, global.” Indeed, they often connect the past with the present, spotlighting the seismic changes in Uruguayan society.

Sometimes the artists create irony by linking two objects rarely placed side by side. The dark silhouette of a bear rides a skateboard affront a sunny-yellow backdrop in one painting. Uruguayan Santiago Velazco, the artist, hints at the growing proximity of wilderness and human society, as nature shrivels while cities boom. 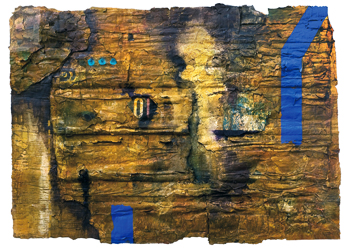 Santiago Aldabalde’s “Ferrer Serra” is among the works at the IDB Cultural Center that question the notion of social and economic progress in “Contemporary Uruguayan Artists.”

A second Velazco work depicts another social problem: homelessness. On the left side of an apple-red canvas is a house; on the right is a man on a bicycle, his belongings bundled in trash bags behind him. Velazco aptly calls the work “Homesweetstreet.”

The artists also pair old and new objects to demonstrate the corrosion of time. For example, a photojournalism project by Daniel Machado details the collapse of middle-class families through a series of photographs depicting a slipshod house.

One picture captures the home’s faded and chipped wallpaper. Classic books such as “Victor Hugo” on the dresser suggest the owner was educated; the miniature cartoon figurine of Walt Disney’s Pluto reflects the presence of children. But the ruin and disarray of the wall, along with the dust crusted on the books and photographs, show that time was not kind to this family.

In similar fashion, artist Diego Velazco captures the death of movie theaters with his lens. The series of black-and-white photos, called “The Last Cinemas,” celebrate the glory days of movie theaters, which are crumbling under new technologies such as Netflix and Redbox. The series focuses on a spacious theater that is filled with a crowd enthralled by a film in one image, but eerily empty in the next shot.

These themes of globalization, alienation, shifting family values and questions of identity permeate the exhibit. Diego Villalba reflects on the strong European heritage in Uruguay and other parts of the Americas, using his travels around the world to inform his creative process and embracing the various cultures he’s encountered. From afar, his “Back to Delft” looks like a series of repeated images, but on closer inspection, viewers will see their subtle differences.

“Nowadays, with globalization, everyone at first seems to look the same,” observed Soledad Guerra, IDB exhibitions coordinator. “But we all are a bit different when you look closer.”