Jerome Barry knew he had a knack for music from the age of 7. The Boston native and founder of the Embassy Series was born into a musical family and pursued music with a passion, singing at his synagogue and performing Irish songs on local Boston radio and television. Recognizing his own potential, a young Barry persisted in his musical education. Along the way, he found another passion during his undergraduate years at Northeastern University — language.

It wasn’t until years later that Barry — who is fluent in nine languages and can sing in nearly 30 — realized the potential music had to unite people across cultures. 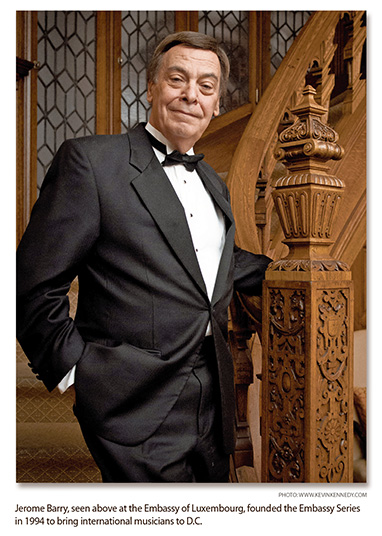 In 1994, Barry combined his passions for music and language and founded the Embassy Series, a nonprofit organization that has hosted hundreds of concerts featuring international artists at their D.C. embassies and ambassadorial residences in an effort to promote cultural exchange.

Now celebrating its 25th anniversary, the Embassy Series has expanded from its initial focus primarily on European nations such as Austria and Germany to encompass cultures and countries spanning nearly every corner of the globe. The diverse list includes Afghanistan, Argentina, China, Cuba, Egypt, Indonesia, Iraq, Israel, Peru, South Africa, Tunisia, Turkey, Ukraine, Venezuela and Vietnam, among many others.

The political overtones behind many of the concerts are hard to miss — Egypt and Tunisia in the aftermath of the Arab Spring, for example; Afghanistan and Iraq following the U.S.-led invasions; the debut of China’s new embassy in D.C. as a symbol of its emergence on the global stage; a rare diplomatic opening with Cuba despite its bitter history with America. Even an upcoming concert celebrating the 100th anniversary of the birth of South African icon Nelson Mandela is tinged with the deep-seated legacy of racism that continues to resonate, both around the world and at home.

But the focus of the Embassy Series has always been on the music and its ability to unite, not the power of politics to divide.

The organization is the only one of its kind in D.C. Barry spent nine years touring Europe as a vocalist, performing 120 concerts annually. After soaking up the music scenes of Rome, Paris, Amsterdam and other international cities, he returned to D.C. and noticed the political tension that the demise of the Soviet Union left in its wake. With new D.C. embassies forming to accommodate former Soviet republics, Barry wanted a musical space that was able to bridge these cultural gaps while leaving politics at the door.

“We started going to these embassy concerts and found that not many people were involved in it. Most embassies wanted to invite congressmen and White House staff. We thought, ‘No, a lot more could be done,’” Barry said in an interview with The Washington Diplomat.

As co-founder of the Washington Music Ensemble in the early 1980s, Barry had the opportunity to forge relationships with diplomats, paving the way for the Embassy Series.

Barry and his wife Lisette’s commitment to uniting cultures in an apolitical environment is apparent in the range of artists spotlighted over the last quarter century. The Embassy Series gradually expanded to feature artists from 88 countries, including those in Africa, the Middle East and South America whose musicians don’t always receive prominent recognition in mainstream performance circles. While programs often feature traditional classical repertoires from the likes of Beethoven and Mozart, the Embassy Series also strives to showcase folk music and artists from minority ethnic groups, as well as non-Western instruments such as the oud, a pear-shaped stringed instrument commonly used throughout the Middle East.

Musical diplomacy and the notion of “soft power” was a relatively new concept in 1994, yet the tremendous success of the Embassy Series over the last 25 years illustrates the enduring impact of cultural exchange. And Barry has seen this power in action.

“There are many people that come to our concerts that don’t agree with our politics. But we’re fine, we’re listening to music together and we’re respecting each other’s opinions. It’s very important to respect one another’s opinions,” he said.

After the fall of the Soviet Union, the Embassy Series highlighted nations from the Eastern bloc. Russian, Bulgarian, Hungarian, Latvian, Lithuanian, Slovak and Ukrainian artists performed, many for the first time in the United States, with the goal of demonstrating that music transcends politics. 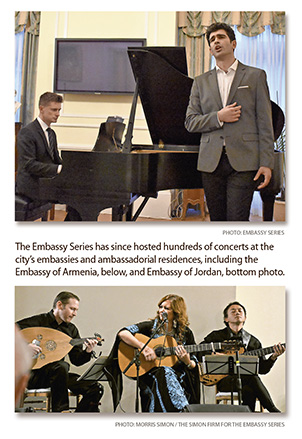 Barry doesn’t shy away from countries that aren’t on the best terms with the U.S., whether it be China or Cuba. Current events often form the backdrop of concerts. In 2010, as the Iraq War was still raging and American troops were fighting to stamp out sectarian battles, the Iraqi musical ensemble Safaafir performed at the newly opened Iraqi Cultural Center. More recently, the Embassy Series featured Sufi music at the Pakistani Embassy.

Having dealt with embassies for so long, Barry has developed a rapport with many ambassadors that he believes is essential to preserving relationships in good times and bad. “We put them on the spot when we need to, but we have a friendly banter, too, which is good. There are so many ambassadors that I’m fond of,” Barry said, “and when you ask to work with them, they understand. They love America, they’re able to work well here and they’re open-minded.”

It hasn’t all been smooth-sailing, though, and that has nothing to do with politics. Running a small arts nonprofit always entails significant financial hurdles. The Embassy Series hosts roughly two dozen concerts a season — an ambitious undertaking given the costs of instrument rentals, artist compensation and travel, and the cultural cuisine served at the receptions, all of which, Barry stresses, is essential to creating the international ambience for which the series is known. The artists, however, come first.

“One of our missions is supporting our artists. It costs money, it’s a lot of work and you have to be devoted to it. If you don’t have passion and talent, you haven’t got it. We respect artists because we are artists,” Barry, a seasoned baritone, said. “Performing is a way for us to grow.

“The first thing that always gets cut is the arts,” he lamented. “That’s not good because the arts brings people together in a nonpolitical, non-confrontational way. These people are just like us. Music is a way of presenting their country in a positive way.”

With 25 years under his belt, Barry has no intention of slowing down. This upcoming season will highlight artists from Afghanistan, Belgium, Colombia, the Czech Republic, Poland, Peru and Slovakia. It kicks off with South African cellist Jacques-Pierre Malan, who will perform at the embassy on Sept. 26 to celebrate the 100th anniversary of Mandela’s birth. It is concerts like these that Barry values the most — bringing in music from other cultures to give audiences a better appreciation of the nation on a deeper level. And Barry plans to continue looking outside the box for artists.

As for the organization’s future direction, the founder is intent on keeping the Embassy Series going after he retires and is looking to the younger generation for musicians with his passion to take the lead, because, as Barry puts it, “what better way to bring people together than through music.”

For more information on the Embassy Series, visit www.embassyseries.org, or read past articles in The Washington Diplomat, including: “Axis of Engagement: Embassy Series Sings Praises of Cooperation Over Confrontation” in the October 2009 issue; “Embassy Series Duo Revels in Sweet Sounds of Success” in the September 2011 issue; and “Embassy Series Marks Its 20th Anniversary Season” in the November 2013 issue.

Candace Huntington is an editorial intern for The Washington Diplomat.