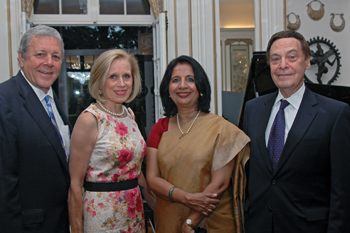 Jerome Barry and his Embassy Series are marking their 20th anniversary season of hosting international concerts in the nation’s capital, a milestone built on the ambition and mission that drove Barry’s initial foray into the diplomatic scene with the Washington Music Ensemble.

Barry, a multilingual baritone, and his wife Lisette settled in Maryland in 1974 after spending years performing abroad. He began performing at embassies with the Washington Music Ensemble, which he founded with pianist Alan Mandel in 1981. Thirteen years later, he decided to start his own group, the Embassy Series.

“I think when it really became the Embassy Series — as opposed to the Washington Ensemble performances — was at a concert at the British ambassador’s residence in 1994. They had a wonderful reception in the gardens there. We were doing ‘Songs of Travel’ by Ralph Vaughan Williams,” Barry recalled. “And I think at that time we were charging much less than we are now. But it hit me that we needed that paradigm, a new way of thinking, that we had to spread our wings.”

That’s when the Embassy Series was born, bringing acclaimed artists, pianists, instrumentalists, singers and string quartets from all around the world to Washington, D.C. In fact, since its inception, the Embassy Series has hosted hundreds of concerts in embassies — nearly 80 so far — and ambassador residences, averaging about two dozen concerts each year.

“We began thinking then about musical diplomacy, that we could accomplish something unique by doing something unique,” Barry said. “It meant finding new artists, it meant traveling, it meant approaching more and more embassies and ambassadors, it meant avoiding politics, and encouraging mutual understanding, and it meant having the support of institutional professionals [and] a great board.”

Those early years were somewhat European-centric, with a classic repertoire of Mozart, Bach and Beethoven performed at a core group of participating embassies — namely Austria, Britain, Germany and Poland. But Barry and his wife Lisette wanted to expand the audience, the artists and the musical genres.

Without ever forgetting its strong European base of support, the Embassy Series expanded to include countries from Asia, Latin America and the Middle East, among other regions. The Embassy Series was one of the first groups to hold a concert in China’s enormous new embassy in Washington. The Cuban Interests Section has opened its doors to the group, as has a diverse roster of countries — among them Afghanistan, Armenia, Argentina, Indonesia, Malaysia, Trinidad and Tobago, Turkey, Tunisia and Ukraine, just to name a few. 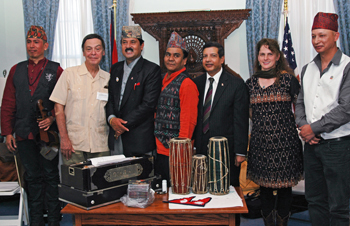 Jerome Barry, founder and artistic director of the Embassy Series, second from left, joins Ambassador of Nepal Shankar Sharma, third from right, at his residence for a concert by acclaimed Nepalese singer Prem Raja Mahat, third from left.

The series is no longer just about concerts, but about bringing people together to discover foreign and oftentimes faraway cultures.

“Every concert, every event is unique,” Barry said. “And it’s always about people — the artists, the genius who wrote the music, the people who work to make it happen, the audiences, people who come not just quietly, but to meet people and representatives of countries and people they would not meet otherwise.”

Exposing audiences to different cultures is something Barry has pioneered, hosting concerts in the Iraqi Cultural Center for example and, during one busy two-year stretch, at the embassies and residences of Egypt, Bahrain, Morocco and Tunisia, all countries wrenchingly affected by the Arab Spring.

Barry, who is Jewish, has reached out and made connections with a variety of Middle Eastern countries. “We don’t deal in politics,” he stressed. “That’s what makes it work.”

This month alone, the Embassy Series will hold a concert in cooperation with the Israeli Embassy in honor of slain journalist Daniel Pearl, as well as pianist Raffi Besalyan in the Armenian Embassy. Next month is an Irving Berlin tribute at the Embassy of Luxembourg and the chamber group miXt at the Spanish ambassador’s residence. In October, the Embassy Series welcomed a traditional folk music ensemble to the Ukrainian Embassy along with concerts at the residences of the ambassadors of India (a first), Nepal and Romania.

Barry said each of the concerts is special and original. “Sometimes, it’s like a love-in,” he said. “Nepal at the residence was like that.”

I can recall numerous special moments over the years. Earlier this spring, for example, nearly 200 high school students, all members of the Homestead Spartan Alliance Marching Band from Fort Wayne, Ind., showed up at the Austrian Embassy to listen to Barry sing, pianist Edvinas Minkstimas play Mozart, and violinist Solomia Gorokhivska and flutist Andrei Pidkivka perform music from Eastern Europe. The students, talented musicians in their own right who routinely win their state’s marching band titles, treated the occasion as if it were a rock concert. 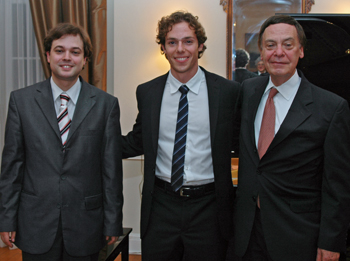 I remember a special Holocaust concert at the Lithuanian Embassy, were a deep hush reigned during the performances of “Songs from the Vilna Ghetto.” There were also homegrown young jazz musicians from Michigan with Iraqi backgrounds who played both traditional and modern music on ancient instruments. I remember the Syrian ambassador presiding over a concert by a young Syrian artist, a star in Europe, impressing the audience, which now probably wonders what happened to both men since the start of that country’s civil war.

At the residence of Nepalese Ambassador Shankar Sharma, amid the early autumn Washington heat and the sounds of legendary Nepalese singer Prem Raja Mahat, who lives in Baltimore, Md., a spirit of conviviality prevailed despite a government shutdown. Rather than political obstinacy, there was open-mindedness on the part of guests to mingle and the innate diplomatic charm of Ambassador Sharma, who encourages sharing without seeming to do so.

And in the background was Barry, the connector who is driven by the same passion for musical diplomacy that has propelled him for decades. During one of the first times I talked with him, Barry was just coming back from a scouting trip for artists in Europe — last stop Romania, with a quick dart to Milan. He is an intense man, still bursting with curiosity tempered not too much by experience. He is a husband, father, grandfather, baritone, Vietnam War vet, and linguist who speaks 10 languages and is working on a number of others.

And he’s an artistic director who knows it takes constant legwork to keep a concert series going amid perennially tight arts budgets. It’s why there’s a whirlwind air about him, as he deals with ambassadors, artists and agents across international time lines, a time-consuming, demanding and dizzying organizational feat.

But for him the sweat equity is worth it, because he wants the Embassy Series to endure not only as an institution, but as an idea. “In the long run,” he said, “you can help build connection and mutual understanding, as well as musical appreciation.”

For more information on the Embassy Series, please call (202) 625-2361 or visit www.embassyseries.com.