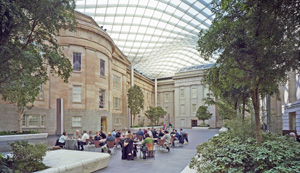 Ah, the depths of a Washington winter. The skies are blue and one could almost, almost forget the icy hand of Old Man Winter. That is until one steps outside, inhales a frosty breath, and looks around to see nary a leaf on the forlorn trees.

Of course, not everyone can escape the nation’s capital for warmer climes. So wouldn’t it be nice to stay in Washington in a place where one could be outside, not cooped up, yet not subjected to the rigors of the season? A sort of in-city vacation from winter. Is such a combination possible?

Fortunately, there are two Washington locations that combine outdoor-indoor beauty, are jam-packed with other sensory and intellectual payoffs, are located near other tourism icons, and, better yet, are absolutely free.

Step out of a neoclassical building into a city-block-size courtyard where the sky opens up above but you will never get wet or cold. The Robert and Arlene Kogod Courtyard is an architectural masterpiece that links two separate Smithsonian Institution museums, the National Portrait Gallery, which tells the nation’s story through portraits of the presidents and other great Americans, and the Smithsonian American Art Museum, which features leading American artists who also paint a picture of the nation’s history.

The Robert and Arlene Kogod Courtyard is an architectural gem that links two Smithsonian Institution museums.

The Kogod Courtyard features a wavy, transparent glass-and-aluminum canopy that floats 86 feet above a 28,000-square-foot open space, allowing visitors to look up at blue skies as clouds drift by overhead. Designed by Foster + Partners and opened in 2007, the canopy, made of 864 individually shaped glass panels set in a steel grid and supported by eight aluminum columns along the courtyard’s perimeter, does not rest its weight on the historic building it encloses, and instead gently floats over it like a rippling cloud.

The courtyard, kept at a mild 70 to 72 degrees Fahrenheit, is landscaped with a 32-foot-high ficus tree and 16 smaller, delicate black olive trees, housed within elegant, smooth white marble planters that double as benches for sitting. The impressive Greek Revival exteriors of the two museums frame all four sides of the open space. Four one-quarter-inch-deep scrim fountains in the gray granite floor feature flat, rectangular, and well-behaved planes of water that make a gentle gurgling sound.

It’s the perfect place to decompress and have a snack. The Courtyard Café, open from 11:30 a.m. to 6:30 p.m., features casual dining options including soups, a salad bar, sandwiches, panini and antipasti. Desserts and snacks, including ice cream, fruit and yogurt parfait, are also available. Beverages include coffee, espresso, beer, and white and (unusual for a museum) red wines. Free public wireless Internet service is also available throughout the courtyard.

In addition, the space hosts a wide variety of public performances. Every third Thursday of the month from 5 to 7 p.m., including Jan. 19, 2012 and Feb. 16, 2012, the Smithsonian American Art Museum offers live jazz performances in its “Take Five!” performance series in the courtyard. The January and February performances will also feature printmaking demonstrations by artists from George Mason University in conjunction with the museum’s “Multiplicity” exhibition. Movies are sometimes screened in the courtyard, too, such as the Feb. 9 screening at 7 p.m. of the Charlie Chaplin classic “Modern Times.”

One could easily spend the better part of a day at one or both museums. The Portrait Gallery features a complete collection of presidential portraits, including the famous “Lansdowne” portrait of George Washington by painter Gilbert Stuart. Some of the most important presidents, including Washington, Abraham Lincoln, and Franklin Delano Roosevelt, are given expanded treatment.

“The Struggle For Justice” uses photographs, paintings and posters to highlight efforts to end discrimination against different groups of Americans, with portraits of women, Native American, Latino and other groups’ civil rights leaders.

Temporary exhibits at the National Portrait Gallery include:

• “Seeing Gertrude Stein: Five Stories” (through Jan. 22), featuring photos and artistic depictions of the famed expatriate American author that depict her many identities, including renderings of her by many famous artists.

• “One Life: Ronald Reagan” (through May 28), paying tribute to the charismatic president’s life and accomplishments.

• “Mementos: Painted and Photographic Miniatures, 1750-1920” (through May 13), celebrating the small painted and photographic depictions of individuals given as tokens or mementos, including miniatures of famous Americans.

• “150th Commemoration of the Civil War: The Death of Ellsworth” (through March 18), which examines the death of Col. Elmer Ellsworth, the first Union officer to be killed in the Civil War. Felled by a local innkeeper in Alexandria, Va., Ellsworth became a hero to the North.

The Smithsonian American Art Museum’s permanent collection galleries are divided up into exhibits on American art before 1945, illustrating key aspects of U.S. history such as colonization, westward expansion, the Civil War and the Depression, as well as movements and works created after 1945, including the Abstract Expressionism, Color Field and Pop Art movements. A third permanent exhibit, “The American Experience,” features landscapes, street scenes and other location-based depictions that highlight the role of place in the American experience. It features traditional landscape artists such as Winslow Homer but also more modern artists such as Hans Hofmann, Isamu Noguchi and Georgia O’Keeffe, along with photographs by Lee Friedlander.

• “Inventing a Better Mousetrap: Patent Models from the Rothschild Collection” (through 2013), featuring 32 models illustrating a variety of patent inventions submitted by inventors throughout the country.

• “Multiplicity” (through March 11), which uses 83 works from the museum’s collection to explore the concept of making multiple images from the same matrix.

• “The Great American Hall of Wonders” (through Jan. 8), highlighting 161 paintings and drawings by prominent artists of inventions and scientific discoveries related to the American belief in innovation.

• “Annie Leibovitz: Pilgrimage” (Jan. 20-May 20), with photographs by the famed photographer of objects and locations that have shaped Leibovitz’s national sense of American culture. 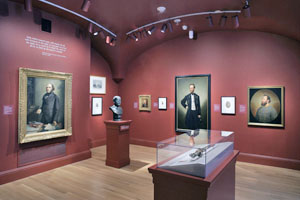 The American Art Museum and National Portrait Gallery are also historic, as they are housed in a building that originated in 1840 as the Patent Office Building, where 200,000 models by inventors, including those in the “Inventing a Better Mousetrap” exhibit, were displayed in nine-foot-high cases. During the Civil War, the building served as a makeshift hospital, where leading poet Walt Whitman visited the wounded. Abraham Lincoln also held his second inaugural ball in the building.

Located literally on top of the Gallery Place-Chinatown Metro station at 8th and F Streets, NW, the museums are surrounded by a plethora of other sights. Immediately south is the International Spy Museum and the neoclassical Monaco Hotel, which used to be the Washington General Post Office, and to the east is the glittering, modern-day entertainment complex at Verizon Center.

Step out of the cold and into the U.S. Botanic Garden Conservatory’s two courtyards and 10 enclosed greenhouses, whose glass windows and roofs allow you to see the sky above and whose temperatures range all the way up to a balmy 72 degrees Fahrenheit in some rooms. Above, misters spray gentle droplets of water that disperse far overhead.

A trip to the Conservatory is many trips in one. Its centerpiece is a jungle room that lets you roam among trees and vines soaring 90 feet into the sky, including a catwalk that lets visitors walk at the level of the jungle’s canopy. A beautiful orchid room houses a dazzling variety of the tropical blooms. Want to visit Hawaii? Swinging doors open to reveal a small room housing plants from the Aloha State. Then walk through the Hawaii room’s doors into the adjacent world deserts room, which houses a spectacularly varied collection of cacti, succulents and other plants adapted for life in arid conditions. 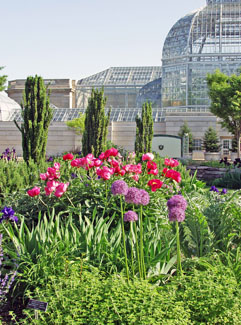 The central Garden Court houses a wide collection of some of the most beautiful and useful plants, such as orchids, coffee trees and banana plants. The Garden Primeval is a verdant, sprawling section that features ferns and primitive trees that make you think a dinosaur is just beyond the next bend. A separate room is dedicated to medicinal plants.

From Feb. 18 through April 29, the Conservatory’s Garden Court and East Gallery will house the 17th annual orchid exhibit, in collaboration with Smithsonian Gardens, showcasing orchids from around the globe. The collection will honor the 100th anniversary of Japan’s gift of the cherry blossoms to Washington by presenting orchids in settings evocative of Japanese gardens.

If the day is not too cold, step outside and enjoy the two outdoor components of the Botanic Garden. To the west is the National Garden, with meandering paths that wind through a regional garden of mid-Atlantic native plants and a collection of organically grown roses. Tables line the sides of the First Ladies’ Water Garden, a beautiful fountain complex that doubles as a lovely place for a picnic.

To the south, across Independence Avenue, is Bartholdi Park, created in 1932 to showcase a sculptural fountain designed by Frédéric Auguste Bartholdi, creator of the Statue of Liberty. The Bartholdi Fountain features three graceful women in billowy tunics supporting a water basin and surrounded by a landscaped garden.

Like the American Art Museum and National Portrait Gallery building, the Botanic Garden is also historic. Early in America’s history, the founding fathers, many of whom were farmers or plantation owners, discussed the creation of a center to house plants and seeds of value to the nation. An earlier botanic garden was established on the National Mall in 1820 and the current location has been in operation and open to the public since 1850. The Conservatory was built in 1933 and renovated in 2001. Unlike the National Mall, the Botanic Garden reports to the Joint Committee on the Library of Congress through the Architect of the Capitol, rather than the National Park Service. There are 60,000 plants in the garden’s collection, some dating back to an 1842 naval expedition that gathered plants to provision the garden.

The U.S. Botanic Garden is located at 100 Maryland Ave., SW, just southwest of the U.S. Capitol Building. Nearby, the vast expanse of the National Mall and its Smithsonian museums beckon. Closest is the National Museum of the American Indian, which also happens to have one of the best cafeterias among the Smithsonian Institutions. To the north is the Ulysses S. Grant Memorial, the sprawling bronze memorial to the Civil War general and president that took sculptor Henry Shrady more than 20 years to design and build. To the east, behind the U.S. Capitol on First Street, NE, is the U.S. Supreme Court building and, to the south, the Thomas Jefferson Building of the Library of Congress.

David Tobenkin is a freelance writer in Maryland and licensed D.C. tour guide. He can be contacted at dtobenkin@yahoo.com.