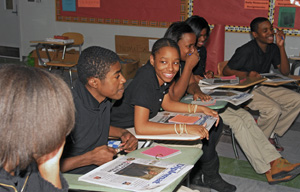 More than 1,700 U.S. soldiers have died in Afghanistan, yet nine in 10 American high school students can’t find that war-ravaged country on a world map.

Fewer than 40 percent of young adults know that China and India are the only two countries with more than 1 billion inhabitants each. Equally troubling, 74 percent of American students believe English is the world’s most commonly spoken language (Mandarin is). And while just about every teenager in America has a Facebook account, only 11 percent of these kids use the Internet to follow current events around the world.

These findings, taken from the latest National Geographic Literacy Survey, deeply worry Asjed Hussain, an 18-year-old freshman at Georgetown University — and one of three local “project ambassadors” with the One World Youth Project.

OWYP, a nonprofit organization founded in 2004, aims to fight ignorance about the world by using email, Skype and Facebook to pair U.S. secondary schools with classrooms in other countries, and eventually by broadening the program internationally.

“Our mission is to foster cross-cultural understanding,” said Hussain, a native of Pakistan who’s among the cadre of university students who regularly visit classes in person to assist teachers in implementing OWYP’s high-tech cultural exchange. “We come into an eighth-grade classroom in D.C. once a week, and we teach them about the United Nations, international organizations and community involvement. We also connect our classroom to an eighth-grade classroom in Kosovo through Skype and YouTube, so the kids get a sense of internationalism. We can talk about different cultures, but this way, they actually get to see these other cultures.”

From left, Quabanah Abdelaziz, Ashley Boykin, Zena Craig, Quela’h Simms and DeMarco Green, who attend Charles Hart Middle School in Anacostia, learn about foreign cultures as part of the One World Youth Project, which uses email, Skype and Facebook to pair U.S. secondary schools with classrooms in other countries.

Hussain talked to The Washington Diplomat during our visit last month to Charles Hart Middle School, which is located in Anacostia — one of the District’s toughest neighborhoods.

There, teacher Nijma Esad watched as her six students engaged in a lively discussion with Hussain and his two fellow project ambassadors: Brian Potochney and Stephanie Arzate. The topic at hand: illiteracy, poverty, hunger, sexually transmitted disease and other issues addressed by the U.N. Millennium Development Goals.

Granted, these aren’t likely subjects for underprivileged kids who have never ventured far beyond the District of Columbia, let alone internationally.

But these kids are different, said Esad.

“This is our third year of working with One World,” she explained. “Ours is a leadership elective class where I interview the students to see if they’d be a good fit for our program. We focus on life skills, career development, anger management. We try to help students at risk of dropping out of school early. Being a part of the One World project allows them a glimpse of the world at large. They’ve had sister schools in Qatar and Kosovo — and now their eyes are opened to a bigger world.”

Indeed, she said, “last year, some of these ambassadors taught my students how to use chopsticks. Later, after the earthquake and tsunami, I took them on a field trip to the Japanese Embassy, and my students were the shining stars.”

One of those kids, DeMarco Green, said that thanks to OWYP he learned about Kosovo, an Albanian-speaking nation that declared its independence three years ago.

“I never heard of Kosovo before,” said the 14-year-old, who lives five blocks from school. “I learned that they dress differently and they have different ways of life. They speak our language but they have an accent. And they seem enthusiastic about how we live.” 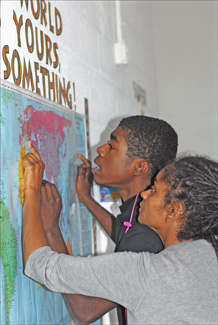 Nijma Esad, a teacher at Charles Hart Middle School, helps student DeMarco Green find Kosovo on a map. The middle school participates in the One World Youth Project, a nonprofit that aims to fight ignorance about the world by using social media to interact with students abroad.

Added classmate Zena Craig, also 14: “Some people say education is a waste of time, but they’re teaching us stuff we didn’t know about, like the Millennium Development Goals, or that today was AIDS Day.”

Esad, who’s originally from Chicago and has a master’s degree in inner city education, said OWYP’s project ambassadors have helped to arrange Skype conversations between her students and their counterparts in Pristina, Kosovo’s capital city.

“Our interactions are becoming greater, though because it’s a six-hour time difference, they meet at night to be able to talk,” she said. “The last time, a girl from Kosovo sang a Beyoncé song to her guitar, and one of my students did a ‘Beat Your Feet’ dance which is indigenous to Southeast D.C.”

Jess Rimington, the organization’s founder and executive director, says youths who don’t receive a multicultural education are likely to view globalization and the interconnected economy as a threat rather than as an opportunity.

“It’s not just about Skype or the real-time connection. It’s about preparing students to connect with other young people across borders, to teach one another about their rapidly changing world,” said Rimington. “What’s happening is that textbooks cannot update themselves fast enough. But because of the digital divide and time-zone differences, we can’t have live Skype conferences every day. And because of the kids’ writing levels, when you connect in real time, kids tend to focus on little things like music, types of food and dress styles. We’re trying to dig deeper.”

Rimington was 18 years old when she founded OWYP as a link between her high school in Brewster, Mass., and a school in Addis Ababa, Ethiopia. The project grew as educators around the world began emailing her, asking for their classroom to be linked with a partner abroad. Within a year, OWYP became a nonprofit group run by a volunteer group of university students in 17 countries. By 2009, the organization had connected 67 schools in 26 countries using email and social media to coordinate efforts.

Today, One World operates on an annual budget of $400,000. The money comes from a combination of corporate partnerships, individuals and foundations; the universities also pay a fee to participate in the program.

A key component of OWYP involves its unique 30-week curriculum, which covers everything from the spread of HIV/AIDS in Africa to “the secret life of cell phones.” Units have titles such as “Cross-Cultural Questions and Communication,” “Interconnectedness and Collaboration” and “Community Worth and Being a Positive Change Agent.” The program gets kids to talk about such things as identifying assets and challenges in their specific communities (in this case, Anacostia), as well as what countries the clothes they’re wearing came from.

That curriculum is taught to university students in three training sessions over two semesters. One of them, the summer training conference, brings together all university student managers to West Virginia for a one-week comprehensive training, allowing students to meet their OWYP colleagues from around the world for the first time.

“One World Youth Project is different than the other university mentor programs because it places such an importance on the middle and high school students who really navigate and explain their community organically and in their own words,” said Georgetown University student Corey Cameron. “It’s a two-way street of knowledge where middle and high school students educate the Georgetown students about what life is like in their community.”

With each partner university, OWYP establishes a service-learning program — a One World Hub — on campus for the benefit of students as well as the surrounding secondary school system. OWYP engages these students in a leadership experience over three semesters and helps them connect local secondary school classrooms with classrooms abroad.

Bryce Honsinger, a longtime OWYP educator and 2010 winner of Ontario’s Premier’s Award for Teaching Excellence, said he’s seen his students’ behavior change dramatically over the course of a school year due to the OWYP curriculum. That’s because his innovative teaching methods have allowed him to merge that curriculum and conversations with classrooms abroad into the Canadian Education Ministry’s learning standards, bringing academic topics to life in his own classroom.

“In Ontario right now, there’s a huge push for character education,” he said. “I’ve seen measurable evidence that bullying has decreased since my students have been exposed to the OWYP curriculum and these concepts.”

Rimington said One World Youth Project will soon expand to schools in Guyana, Turkey and Pakistan. By 2015, OWYP will also incorporate secondary schools in a dozen U.S. cities including New York, Los Angeles and San Francisco, as well as more than 100 schools overseas.

“Sometimes we get caught up in our own little bubble and fail to see how our talents can help benefit the community,” project ambassador Zenen Jaimes recently told the Georgetown student newspaper the Hoya. “A lot of us can spout off the challenges facing South Sudan or recount the details of the Libyan conflict, but many Georgetown students still see anything beyond Georgetown as one big mystery.”

The program hasn’t been without its challenges, however. Despite general support from the schools involved, Jaimes cited bureaucracy and budget cuts within the D.C. public school system as recurring problems — not to mention unruly classroom conduct that disrupts the virtual learning process.

Yet back at Hart Middle School, we saw no evidence of bad behavior; quite the contrary.

Asked why he was motivated to join OWYP, project ambassador Brian Potochney said he went to high school in the District and that service was a big part of what he did there. “But a lot of these services and human rights organizations on campus were really focused on raising awareness, and I wanted something more hands on. One World, I thought, offered the perfect combination.”

Hussain added: “The most successful movements are multilateral movements where countries work together. If you’re starting in middle school teaching kids to work together, that’s going to make a huge difference later on. It’s nice that we’re directing this toward the kids who are our future.”

But perhaps the most enthusiastic observation came from Stephanie Arzate, 19.

“These kids are absolutely amazing. I just love how involved we can get in conversations,” she said. “We’ll ask them a question and only have five minutes planned, but they keep going and going. I learn so much from them. It’s so refreshing coming from these kids who are incredibly intelligent for their age. Ten years from now, I hope our kids can look back on this with pride.”