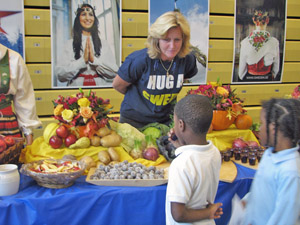 It’s not every day that you get to meet a real prince. But on Oct. 26, the students of Miner Elementary School in Northeast D.C. did just that when 500 school children between the ages of 6 and 11 got a taste of Swedish food, culture and royalty firsthand.

Swedish Prince Daniel Westling, as part of his first official visit to the United States, visited Miner Elementary on the occasion of Nordic Food Day, the first of four new International Food Day events being held this school year by D.C. Public Schools Food Services in partnership with the longstanding Embassy Adoption Program, itself a partnership with the Washington Performing Arts Society.

Julisa held a card that said “god dag” — good day in Swedish. Keith, who had been studying Sweden for weeks in his classroom as part of the Embassy Adoption Program, said he’d already gotten a small taste of Swedish culture that morning — traditional lingonberry juice for breakfast in the school cafeteria.

Upon his arrival, Prince Daniel, along with Swedish Minister for Health and Social Affairs Göran Hägglund, Swedish Ambassador Jonas Hafström and his wife Eva, warmly greeted the excited pair of youngsters.

More than 100 students and teachers waited inside with blue and yellow balloons and Swedish flags. The prince, a former gym owner and personal trainer who married Sweden’s Crown Princess Victoria in June 2010, was greeted as if he was a rock star with squeals, screams and camera clicks — and he worked the hallway like a seasoned politician. The media could barely get a photo in as he knelt down to shake hands and hug some of the students.

After the fanfare, the Swedish group of dignitaries was treated to a performance of the U.S. and Swedish national anthems by the Miner Glee Club, and then the charming prince entertained the students by talking with them about his life and country.

“They sang the anthem beautifully; their pronunciation was perfect,” said newly appointed Swedish Embassy Deputy Chief of Mission Karin Höglund, who admitted the festivities were making her homesick.

On Nordic Food Day, the Embassies of Denmark, Finland, Iceland and Norway also sent their own cultural ambassadors, chefs and musicians to D.C. schools that they partner with through the Embassy Adoption Program.

Even though only five D.C. schools had access to the special cultural programs that day, students in all 126 D.C. public schools got to sample the culinary offerings in the form of various Nordic breakfasts, lunches and dinners, including Icelandic yoghurt, lingonberry juice, whole wheat pancakes with jam, Swedish meatballs with lingonberry jam, Norwegian salmon in dill sauce with roasted root vegetables, Danish potatoes and Wasa crispbread, and open-faced Danish sandwiches. 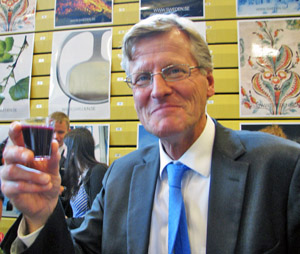 Ambassador of Sweden to the United States
Jonas Hafström

Since 1974, the Embassy Adoption Program, in conjunction with the Washington Performing Arts Society, has matched embassies with fifth- and sixth-grade classrooms in the D.C. Public Schools (DCPS) system — giving the students, through classroom programming and local field trips, the opportunity to learn about a country’s history and culture directly from the source (also see “Successful Adoption” in the September 2010 issue of The Washington Diplomat.)

This year has seen the biggest participation yet, according to Kate McNamee, Embassy Adoption Program coordinator with DCPS, who noted that 61 embassies are working with 46 schools and 69 classrooms.

“It’s a way to utilize the community here,” McNamee said. “We have such a resource in our local embassies.”

Serving traditional dishes of the featured country in all school cafeterias on each International Food Day extends the embassy adoption experience to even more students, she explained.

“We are using food to introduce students to new cultures and also demonstrate to them how they can make healthy food choices across cuisines.”

“It’s been quite an undertaking,” said Bateson, who was behind the scenes in the buzzing Miner kitchen making sure the Nordic meals were just right. “It’s great to start partnering with the embassies.”

Over in the gym, different leaflets about life, food and the monarchy were neatly stacked on an information table, and pictures representing Swedish culture hung on the walls.

Meanwhile, students donning Viking caps, crowns and scepters had their pictures taken in a photo booth brought in for the occasion. Prince Daniel even got in on the action, popping into the booth with student hosts Julisa and Keith.

The Swedish ambassador’s wife Eva Hafström and embassy interns (all wearing “Hug a Swede” T-shirts), as well as women in Swedish traditional dress dished up donut-hole-size “chocolate delights” — a healthy dessert beloved by children in Sweden.

Ambassador Hafström tasted a chocolate delight (“I haven’t had one of these in 10 years. This feels like old times!”), and washed it down with a smoothie-like blueberry soup, which, he explained, can be taken as a drink or dessert. “Skall,” he toasted, clinking plastic cups.

“It’s overwhelming to see the enthusiasm and the happy faces. For us Nordic embassies, reaching out to the D.C. schools, if we can pay back to the community and the school system in a way like this, it’s very, very good.”

Marsha Parker, an instructional aide at Miner Elementary School and a retired DCPS principal, told The Diplomat: “Through our research we learned so much about Sweden, the demographics, the culture. Every child in Sweden goes free to college, even preschool…. Sweden is a country that they usually don’t go into. Now they know so much about it. They are so excited.”

D.C. Mayor Vincent Gray, who had dropped by for the program, agreed. “It’s fantastic,” he said. “I knew that it would be wildly successful. The kids were very excited…. The food idea has value in itself, and then the whole program has value in terms of solidarity between our two countries.” 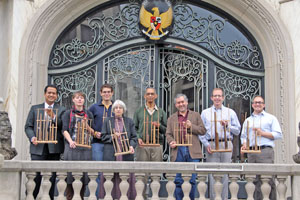 For the upcoming Indonesian Food Day in January, the Indonesian Embassy, which was “adopted” by a Miner Elementary School classroom last year, will also share its food, music and other cultural offerings with D.C. Public Schools.

This year the embassy staff will partner with Nalle Elementary School. Plans include letting students play traditional Indonesian instruments (the gamelan and angklung), try on native costumes, color Indonesian pictures, and sample desserts at a tasting table. Indonesian Ambassador Dino Patti Djalal will attend the program and interact with the students.

Over the next few months, staff will also be teaching the Nalle students about Indonesian language and culture, and in the spring, as the Embassy Adoption Program does every year, the students will come to the embassy and perform what they have learned.

“Nordic Day benefited students by providing them with exposure to new foods and new styles of preparation and by engaging them in culture through their school meal,” said Paula Reichel, program coordinator with the DCPS Office of Food and Nutrition Services. “It is our hope that Nordic Day and other International Food Days inspire students to become adventurous eaters while making students hungry for information about the world around them.”

However adventurous the food, it still must conform to DCPS Food Services standards. Meals produced for the International Food Day events must meet the same standards as the regular meals, which, besides including protein, grains, vegetables and fruit, means nothing fried or anything containing nut ingredients.

“Our biggest challenge in determining the menus is finding foods/dishes that represent the culinary tradition of the country and that meet our nutritional standards, can be procured easily, and are suitable for production in a school cafeteria setting,” explained Reichel.

This means that Indonesia, for example, will be precluded from offering fried food and using the popular peanut satay sauce in its dishes.

Panama is next on the list, set to host a Food Day in March. Gina Della Togna, the Panamanian Embassy’s cultural and scientific attaché, said that choosing foods that weren’t fried was a particular challenge because most typical Panamanian foods are fried. A Panamanian chef is currently working with DCPS to determine the menu, which might feature rice with chicken, potato salad and corn tortillas, among other things.

Panama, which has been participating in the Embassy Adoption Program for the past two years, will also present an introductory program about the country and put on a Christmas party this month at its partner school, West Elementary. Staff will come to the school once a month for the next few months and explore such topics as the Panama Canal and Panamanian culture, folklore, music and food. Then in March, on Panamanian Food Day, they will put on a special cultural and food program at the school.

International Food Days, featuring cuisines from Europe, South America and Asia this year, will be held quarterly every school year from now on.

“It’s important to schedule International Food Days with regularity so that students begin to anticipate the events, making them more apt to try the new foods on the menu,” said Reichel. “The way the program is scheduled raises awareness about many embassies’ great work in the D.C. area and the opportunities available to schools through the Embassy Adoption Program. Having quarterly programs also allows us to feature truly distinct cuisines from around the world.”

Julie Poucher Harbin is an assistant editor and contributing writer for The Washington Diplomat.