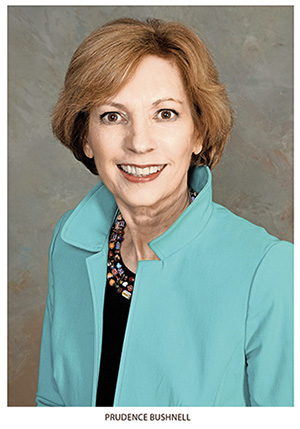 Prudence Bushnell understands the curse of Cassandra. Serving as deputy assistant secretary of state for African affairs from 1993 to 1996, she issued an urgent memorandum on April 6, 1994, warning of imminent civil conflict in Rwanda. The U.S. government maintained its position — it would not send help — and the next day, the Rwandan genocide began. More than 800,000 were killed.

Appointed ambassador to Kenya in 1996, Bushnell found herself in a similar situation less than three years later. More urgent warnings followed — this time regarding sub-standard safety conditions at the American Embassy in Nairobi. These too were ignored.

On Aug. 7, 1998, she was one of thousands of victims of a coordinated al-Qaeda attack against American embassies in Kenya and Tanzania.

Twenty years later, Bushnell, a maverick former diplomat who has often struggled to adhere to State Department protocol, is publishing an account of her experiences.

“Terrorism, Betrayal and Resilience: My Story of the 1998 U.S. Embassy Bombings” details the lead-up to the attacks, in which 224 people were killed and 5,000 injured in simultaneous bombings at embassies in Nairobi and Dar es Salaam.

The book offers a scathing critique of U.S government shortcomings both before and after the bombs went off, including during a January 2001 trial for four of 21 al-Qaeda terrorists responsible for the attacks.

It questions why thousands of injured Kenyans did not receive medical compensation from the American government, and why the CIA and FBI refused to share critical intelligence that might have prevented the tragedy.

In an era of crippling budget cuts to the American Foreign Service — President Trump has repeatedly tried to slash the State Department’s budget, although Congress has largely kept it intact — the book also serves as a cautionary tale about what can go wrong when Washington ignores warnings from the field in the name of cutting costs.

“This is a problem that I suspect exists in every foreign service in the world: that what we see in Washington is not what people are seeing in the field. I’m not the first ambassador to have been ignored. I’m sure there is that tension going on at this very moment in capitals and embassies around the world,” said Bushnell in an interview.

After joining the U.S. Foreign Service in 1981 and working her way up the ranks in India and Senegal, Bushnell was nearly appointed ambassador to Rwanda in 1992.

She refused to go only because her husband was unable to obtain the necessary medical clearance, and was later posted to Nairobi, where she immediately noticed the embassy’s alarming security situation.

The chancery was located at the crossroads of two of Nairobi’s busiest streets, and its front-facing security offset was practically nonexistent. The building’s rear offset was 20 feet at most, and it shared a parking lot with the 21-story Cooperative Bank building. The Inman Report, which was published following a 1983 truck bombing of the American Embassy in Beirut, recommends a minimum 100-foot offset.

Furthermore, the embassy had just one radio line — meaning guards could not communicate via radio if someone else was using the frequency — while the building’s exposed underground parking lot and delivery dock were described by the State Department as “a constant worry to all, as it was a huge vulnerability.”

Although the building was surrounded by an 8.5-foot steel-picket vertical bar fence, a line of steel bollards located between 16 and 59 feet away from the outer walls served as its sole outer perimeter. Window frames were not anchored to the building’s core structure, and the embassy’s emergency action plan did not include training or protocols for car bomb attacks.

“I went to Nairobi with the intention of raising morale in the community, and not to leave things unspoken, because I was still asking myself, ‘Could I have done more with Rwanda?’ That was my lesson — be a squeaky wheel, get them to pay attention.”

Her warnings came at a bad time. The American public had turned cold on foreign operations in Africa following the 1993 Battle of Mogadishu, in which 18 U.S. servicemen were killed and 73 wounded in Somalia. Domestically, the country was distracted by the Monica Lewinsky scandal. 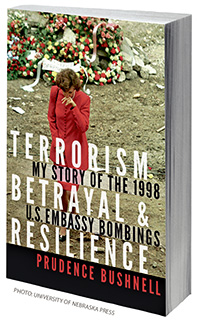 The end of the Cold War had also led the American government to significantly reduce diplomatic expenditure: State Department outlays fell from close to 0.5 percent of the total federal budget in 1994, to just over 0.3 percent by 1998, and the cuts had an effect.

“People in the Department of State in Washington are rewarded for ‘doing things right,’ for getting press releases out on time, getting tasks done on time and managing political appointees in a way that favors them. Doing things right in Washington meant waiving our own security requirements within the department, in order to stay within budget,” said Bushnell.

Although the State Department had planned to undertake a $4.7 million renovation of the existing embassy building, Bushnell saw this as inadequate. The building was too small, too exposed, too old. In December 1997, the State Bureau of African Affairs told her to stop sending cables. People were getting irritated.

On the morning of the attacks, Bushnell was attending a meeting at the Kenyan Ministry of Commerce’s high-rise building, located across from the embassy’s shared parking lot.

Between 10:30 and 10:40 a.m., a truck carrying two suicide bombers and 1,100 pounds of TNT attempted to enter the underground parking lot. Security guards refused to open the gates, at which point one of the terrorists began shooting at the chancery. The other threw a flash grenade at the unarmed guards, who attempted to contact a group of marines located at a nearby command post. They didn’t get through; the embassy’s single radio frequency was busy.

Seconds later, the truck’s payload detonated. Embassy employees had not been trained to lie on the floor and seek cover — like others in nearby buildings, many were looking out the window.

Bushnell recalls the violence and confusion in her book, writing: “An explosion from the street below drew us to the window. I was the last to get up, and I had moved only a few feet from the couch I was sharing with Commerce Minister Joseph Kamotho when a loud wave of freight-train force hurled me back across the room. Everything dimmed. Shadowy figures silently moved past me. Then nothing. I woke to find myself alone.”

Bushnell and other survivors made an agonizing journey through the rubble, down endless flights of stairs and out to the street below, where carnage and mayhem waited.

The Accountability Review Boards later reported that while the embassy remained structurally intact, it was massively damaged, with much of its interior reduced to rubble. Secondary fragmentation from flying glass, internal concrete block walls, furniture and fixtures blinded and disfigured hundreds of people. The Ufundi Building, located adjacent to the embassy, collapsed, killing scores, while two nearby buses filled with passengers were incinerated.

Fearing hospitals would be overwhelmed, Bushnell and some other survivors were transported to the Serena Hotel to seek medical care. Though her physical injuries were not serious, she’d lost 44 colleagues. In total, 213 people were killed in the Nairobi attack.

The U.S. government response was disorganized and chaotic, exacerbated by insufficient numbers of press officers and increasingly hostile local media coverage. Nearly all the victims were Kenyan, and while the American government later announced a $42 million aid and reconstruction package for Kenyan victims, most did not receive any form of medical compensation.

“To deny medical benefits just because they were born in the wrong country? This is a wonderful example of people doing things right versus doing the right thing. You know that compensating them is the right thing to do, but you want to do things right because, ‘We can’t afford it, it’s not our fault, we were victims too,’” she said. 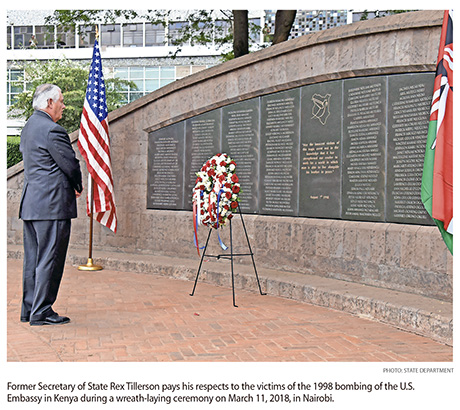 The Accountability Review Boards ultimately determined that despite the chronic, glaring security problems, no single person was at fault for what happened. Although she was vindicated, Bushnell found herself facing crippling grief at the loss of her colleagues, “commander’s guilt” for failing to protect her staff and post-traumatic stress disorder — all taboo subjects for Foreign Service members.

“To be a victim of terrorism is different than being a victim of natural disaster. One of the reasons people terrorize civilians is that it leaves them feeling isolated. Who else has experienced this? In an organization like the Department of State, which gives minimal attention to mental health issues, the imperative to act normal, or to have the tear at the side of your eye that never comes down, is very real. What was not tolerated was frustration and anger. And I stepped over the line on that and continue to,” she said.

The government’s response only made things worse. The American public was transfixed by the Monica Lewinsky scandal, and Washington pushed for a return to “business as usual,” leaving survivors feeling forgotten and ignored. No American government official debriefed Bushnell after the attacks. Congress held no hearings about the bombings, and the mandatory Accountability Review Board focused only on narrow security issues.

During the trial that followed in 2001, Bushnell also learned about “the wall” between American intelligence agencies — a bureaucratic power play that kept the CIA and FBI from sharing critical information with each other and other stakeholders.

“Had the FBI shared information with the CIA or the U.S. ambassador and Kenyan intelligence, I don’t think we would have been blown up. And after we were blown up, nothing changed. The CIA still refused to share information with the FBI and so on, and it continued to be a losing strategy,’” she said.

The failure to connect the dots among different agencies was glaring: Osama bin Laden and his Nairobi cell had been on the radars of the CIA, FBI and National Security Agency since about 1996. He had already been secretly indicted for the 1993 bombing of the World Trade Center that was widely seen as a test run for 9/11.

The date of the Kenya bombing, Aug. 7, also took place exactly eight years after U.S. troops entered Saudi Arabia during the Iraqi invasion of Kuwait — a move that infuriated bin Laden because of the presence of Western troops close to the Islamic holy sites of Medina and Mecca.

Two days before the bombs ripped through the U.S. Embassy in Nairobi, bin Laden gave a media interview in which he said the “terrorism we practice is of the commendable kind.” A map of Africa was behind him. And according to news reports, roughly six months after the Nairobi and Dar es Salaam bombings, bin Laden ordered his top operative to begin planning the Sept. 11, 2001, terrorist attacks.

Let down by the American government and still seeking answers, Bushnell hopes that publishing her account of events will help set the record straight.

“I refuse to allow this to be a meaningless event, and I want our narrative to be out there. It’s important for the public record and for the people in Nairobi, who took the brunt of the attack and got nothing, just nothing. It’s easy to forget that only 12 Americans died in the attacks.”

Paige Aarhus (@paigeaarhus) is a freelance writer working in Africa, Southeast Asia and the Middle East.