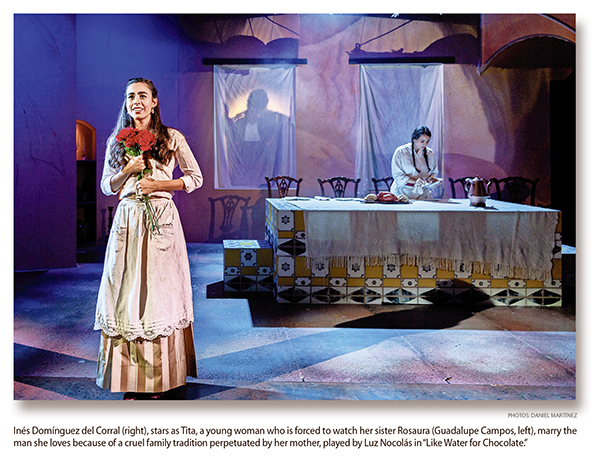 In Mexico, hot chocolate is made not with milk, but with near-boiling water. The play’s title “Like Water for Chocolate,” or “Como Agua Para Chocolate” in its original Spanish, refers to water hot enough to receive the chocolate, a fiery state often associated with heat, anger and/or passion.

The U.S. premiere of “Like Water for Chocolate” at GALA Hispanic Theatre (in Spanish with English subtitles) is filled with such emotions. Originally a popular novel published in 1989 by Mexican author and screenwriter Laura Esquivel, it makes a powerful statement about the positive and negative roles passion can play in people’s lives, even under the most difficult and gleeful of circumstances. The fervor is so strong that at times events even become mystical, in the vein of Gabriel García Márquez’s notorious magical realism, and the play’s symbols become quite poetic. 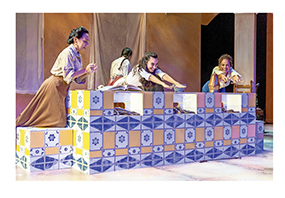 The play follows the decades-long, hard-luck story of Tita de la Garza, who is 15 years old at the play’s start, living on a ranch near the Mexico-Texas border at the turn of the 20th century. She is the youngest daughter of the tyrannical Mamá Elena, who insists on upholding a caustic family tradition of forbidding her youngest to marry and to, instead, take care of her until her death.

The play’s symbolism starts at its beginning, when Tita’s tragic fate is sealed when she is born in the kitchen (the play’s central focus), while her mother cries profusely from peeling onions, transferring her tears to her newborn.

This is the first of many metaphors where food represents emotions that seep into real life, a theme that continues throughout the play.

As Tita turns into a young woman, she must learn to give up the love of her life, Pedro Muzquiz, who loves her as well but is denied her hand in marriage by the mother. Tita must also learn to endure the torture of living side-by-side with Pedro, who decides to marry Tita’s oldest sister, Rosaura, only so he can remain close to Tita.

Tita turns out to be an excellent cook and the passion she pours into her recipes heavily influence the plot’s many twists and turns. For example, when Pedro gives Tita a bouquet of roses, she uses the petals and her own tears to cook a special dish, which whips Tita’s other sister, Gertrudis, into a lustful state and causes her to flee the ranch and into the arms of a revolutionary soldier.

When Tita is forced by her mother to prepare Tito and Rosaura’s wedding meal, a distraught Tita summons the spiritual guidance of the deceased Nacha, the beloved family cook and her positive maternal role model. When saturated with Tita’s tears, the culinary creation makes the wedding guests sick. 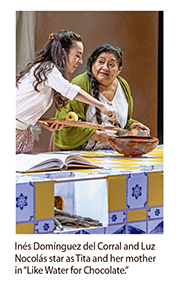 Later on, Tita’s cooking represents life’s sustenance, which her mother refuses as she is dying, and instead dies from an overdose of a strong emetic she consumed for fear of poisoning.

Even the withholding of Tita’s breast milk, which she amazingly produces for Rosaura’s son Roberto when Rosaura’s breasts are dry, is the unspoken reason for Roberto’s death. For alas, Mamá Elena has sent Pedro and Rosaura to live in the U.S., for fear of Tita and Pedro becoming too close.

Often the characters’ passions even evoke the spiritual world. This is the case when Tita and Pedro’s surreptitious and illicit love affair results in Tita losing her virginity. When Tita thinks she is pregnant, Mamá Elena’s ghost curses and violently threatens her, at which point Tita finally confronts her mother, declaring her autonomy.

The play, while strong in most parts, thanks to the direction of Olga Sánchez, does suffer occasionally when emotions are overplayed or underplayed and, thus, become less believable. This is the case with the family’s servant Chencha, played by Karen Morales, whose shrill, constant crying become monotonous. Also, the level of brutality of physical abuse that Mamá Elena, played by Luz Nocolás, lays on Tita seems out of character from the rest of the play, which is often comical and lighthearted. Inés Domínguez del Corral, as Tita, at times has the opposite problem of not reacting enough to her severe surroundings. These inconsistencies and exaggerations turn the production into a soap opera of sorts.

But in the end, the play accomplishes what it sets out to do, which is to tell the somewhat fantastical tale of a family at its best and worst, aided with a little magic, imagination and flavor.