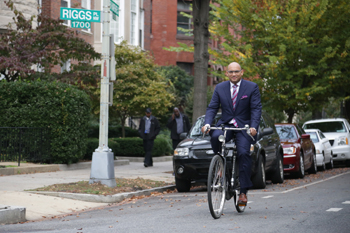 Also See: No Excuses: Finding Time to Exercise Doesn’t Have to be Difficult

The benefits of exercise are well documented and well known, but finding time to feel the burn can be a challenge. Ambassadors feel the time constraint as much as, if not more than, other busy professionals. Still, some say the pros of fitting a workout into their hard-working schedules outweigh the cons of shuffling their calendars.

Ambassadors exercise for many reasons, the least of which, it turns out, is to look good during photo ops. Many say they find a good sweat helps them clear their minds, enabling them to perform better on the job. It also connects them with others in the international community and with Washington residents in general, making exercise a form of public diplomacy. It can even support worthy causes. For one leader, health is the happy byproduct of raising money to support women’s education in his home country.

We spoke with three exercise enthusiasts to find out what they do and why they do it.

Ambassador of Grenada E. Angus Friday, seen in our December 2013 cover story, is an avid biker.

In the December 2013 issue of this newspaper, E. Angus Friday, Grenada’s ambassador to the United States, appeared on the cover in a suit and tie atop his bicycle, which he rode to and from work. Since then, he’s been pedaling less because he’s made the embassy his residence, but the bike remains his preferred mode of transportation and exercise remains a top priority for him.

Friday supplements his previous rides around Washington by exercising three or four times a week in the form of spinning classes — group cycling on specialized stationary bikes — at Vida Fitness’s Metropole location and running along the National Mall. Weather permitting, he still takes his bicycle to and from engagements around D.C.

“If I have a meeting on K Street, I’ll take the bike,” he said. “On the weekend, I can go biking down to the Mall.”

A typical week for him includes a 45-minute spinning class on a couple of weekday evenings and a long gym session on Saturdays.

On Sundays, Friday likes to run the length of the National Mall. He starts at 14th Street and runs to the Capitol and back.

“When I’m feeling very energetic, I’ll then go down to the Lincoln Memorial and then back again,” he added. “Usually that’s just about enough for me.”

His favorite biking spots are Rock Creek Park and the trail to Mount Vernon. He can often be found with his girlfriend pedaling alongside him. “It’s just a great form of enjoyment for both of us,” he said.

Additionally, working out helps cancel out some of the snacking he does at receptions and other events. “You really need the exercise to keep some balance,” he said.

Friday began biking in Grenada with a Roadracer bicycle in 2005. He bought a Dutch Bike to use for his commute when he came to Washington to work at the World Bank in 2009 as a specialist in international climate policy.

“I continued that habit when I took up a new job as ambassador” in 2013, Friday said. “Washington just lends itself to biking.”

Friday downplays his commitment to exercise in comparison to others in his country. Keith Mitchell, Grenada’s prime minister, for instance, starts his exercise routine daily at 4 a.m., Friday noted.

Boot camps, in which participants are put through tough physical drills, are gaining popularity in the Caribbean island nation. Overall, the country is working to promote its medical and wellness tourism, the ambassador added.

“A lot of people are getting involved in exercise,” he said. “It’s something that’s in the culture of Grenadians to keep fit and exercise.” 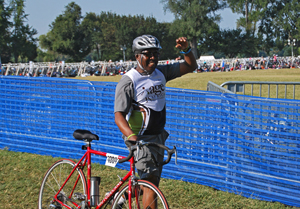 Ambassador of Malawi Steve Matenje took to cycling last year to participate in the Tri for Malawi Team Challenge, which raises money to help girls back home attend school.

Steve Matenje, ambassador of Malawi to the United States, is something of a new cyclist. He took to two wheels last year for a singular purpose: to participate in the annual Advancing Girls’ Education in Africa (AGE Africa) Tri for Malawi Team Challenge, which raises money to help girls back home attend school.

The race fits with AGE Africa’s mission to provide young women in Malawi with opportunities through education, mentoring and leadership development. The fourth annual Tri for Malawi will take place Sept. 7 on and around the Mall as part of the larger Nation’s Triathlon, which includes a 1.5-kilometer swim in the Potomac River, a 40-kilometer bike ride and a 10-kilometer run.

“Those who are physically fit can do all three events,” said Matenje, who is the biker of his three-person team. “But most of us do it as a relay team.”

Throughout the year, the ambassador said he bikes occasionally, but training picks up in the summer as he prepares for the race.

“I bike usually on the weekend because during the week usually I don’t have much time to do that,” Matenje said, although he does hop on the treadmill on weekdays. “Whenever I have a chance during the week to go on my bike after work, I try to do that.”

He typically rides around the Potomac Village area where he lives in Maryland, but he also enjoys riding along the Potomac.

“Back in Malawi, where I come from, several years ago, I would ride a bike now and then because the bicycle is one of the modes of transportation in Africa, especially in Malawi. I used to do that quite a bit,” Matenje said.

But before last year’s triathlon, he had never competed in a cycling competition, and he’s looking forward to doing it again this year. The energy of the crowd is infectious, he told us.

“Everyone was excited, everyone was smiling and everybody was just looking forward to participating. That was my first time to see a large group of people taking part in a competition for charitable reasons,” Matenje said. “Apart from the desire to help raise money for the schoolgirls, it’s also great fun. It’s a great way to meet a lot of people coming from across the United States.”

Last year, Matenje joined a team of 50 athletes, corporate team representatives and embassy staff (including his deputy chief of mission) as part of Tri for Malawi, raising $112,000 to provide 150 scholarships to AGE Africa’s scholars. This year, the event aims to drum up at least $130,000 to support 170 scholarships. Matenje is working hard to ensure that happens by recruiting others in the diplomatic community to either join the competition or sponsor him and by tapping into the community of more than 1,000 Malawians in the Washington metro area.

“The biggest resource we have in Malawi is the people of Malawi,” Matenje said, adding that more than half of the population is female — although only a small fraction of them ultimately finish secondary school, something AGE Africa is working to change. “In Africa, we say that if you educate a boy, you educate an individual. If you educate a girl, you are educating a nation.”

In Monaco, physical prowess reigns. Prince Albert II and Princess Charlene were Olympians — he competed in bobsledding at five Winter Games between 1988 and 2002, and she swam in the 2000 Summer Games in Sydney. 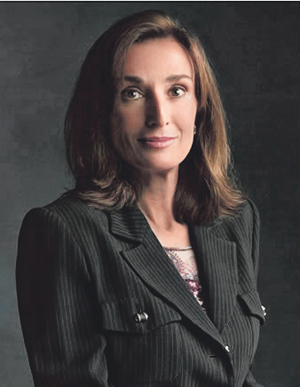 “They have definitely set a high bar of sportsmanship and healthy living,” said Maguy Maccario Doyle, Monaco’s recently appointed ambassador to the United States. “There is a strong emphasis on sports, exercise and eating a balanced (Mediterranean) diet in the principality. Healthy lifestyle choices are taught to the young and retained throughout life. In fact, people in Monaco constantly feature on the top of world longevity lists.”

Maccario Doyle herself works out almost daily. If she’s traveling, she seeks out the hotel gym or pool, while at home, she enjoys “walking and playing tennis as often as I can find a good partner,” she said.

“Every day I find some form of exercise to do, whether it is taking a walk, spending an hour or so at the gym and sauna or playing a game or two of tennis — my favorite,” Maccario Doyle told us. “I’ve recently taken up learning to golf, which is quite therapeutic.”

As a woman in the public eye, it’s easy to assume that Maccario Doyle feels pressure to uphold a healthy physique, but that’s not the case, she said. “I only feel pressure from within to ensure I look and feel my best and maintain a sense of well being.”

To that end, appearance is a happy consequence for Monaco’s former longtime consul general in New York. The main advantage she gains from getting her heart rate up is relaxation.

“Exercise is my form of relaxation,” she said. “It helps calm and center me. I can definitely focus more clearly and have improved concentration after I’ve worked out.”

Solving Problems One Serve at a Time

Regardless of the impetus for the exercise or type of workout, getting moving is a great way for ambassadors to relieve stress, said Kathy Kemper, a former professional tennis player and head women’s tennis coach at Georgetown University from 1978 to 1990. She now coaches privately and is also founder and chief executive officer of the Institute for Education, a nonprofit that promotes leadership and civility locally, nationally and globally.

“I think it’s a great example for leaders to exercise. I always think it’s a little bit short-sighted when people criticize leadership — whether it’s the American leadership or any leadership worldwide — about maybe recreating too much, like maybe they shouldn’t be playing golf because there’s a world crisis going on,” Kemper said. “You want the people that run the world to be clear-thinking, and working 24-7 is not healthy — mentally, physically, emotionally, psychologically at all. People need to remove themselves.”

It is said that more business is conducted on a golf course than in a boardroom, and that can extend to tennis courts or hiking trails, she added. Removing the professional setting, including the entourage of assistants, enables people to relax and be more open to dialogue. That can improve relationships on personal and professional levels.

“I think any kind of activity that one recreates in, whether it’s tennis or golf or just taking a walk, if you get people to spend relaxed time like that off the grid, so to speak, there’s nothing better for building trust and friendship,” she said.

Stephanie Kanowitz is a contributing writer for The Washington Diplomat and Diplomatic Pouch.