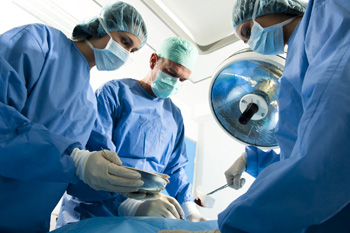 On June 22, 1988, in a small surgery center across the street from what was then known as Kennestone Hospital in Marietta, Georgia, a general surgeon named Dr. Barry McKernan was about to do something he’d done hundreds, if not thousands, of times before: remove a gall bladder. But he and his obstetrician-gynecologist colleague, Dr. William Saye, were going to perform the surgery in a way that had never been done in the United States. Instead of making a large, open incision in the abdomen, McKernan and Saye would make a few tiny incisions, called “keyhole” incisions, and use a small video camera known as a laparoscope to guide their instruments in removing the gall bladder.

The two doctors’ colleagues had laughed when they said they planned to attempt this procedure. The patient, a minister’s wife, had dutifully sought the second opinion McKernan urged her to get; the other surgeon told her it would never work. McKernan told her the other doctor was probably right. But she told them to go ahead and try the revolutionary new procedure anyway. McKernan had to buy the instruments himself, since the hospital didn’t have them and wasn’t prepared to purchase them for this maverick.

The procedure went smoothly, although the two doctors had to make a small additional incision when the gallstones proved bigger than they’d expected. And the next morning, when McKernan checked on his patient in her room across the street at Kennestone Hospital, she sat cross-legged on her bed with just a few steri-strips on her incisions. Her roommate, who’d had a traditional “open” gall bladder removal the previous day, looked and felt like she’d been run over by a truck.

It was the beginning of the minimally invasive surgery revolution in the United States. Within a year, surgeons who had laughed at McKernan and Saye were beating a path to Marietta to learn from them. “Bill and Barry changed the world,” said Dr. William Mayfield, chief surgical officer for the WellStar health system, which today encompasses five hospitals northwest of Atlanta, including the hospital where that first patient recovered.

Minimally invasive surgery, now available for an increasing number of procedures that used to require large, open incisions, has many benefits. As the preacher’s wife (and her roommate) soon discovered, it’s easier on the patient, offering less pain, less blood loss and shorter recovery times. There’s less scarring. People get out of the hospital much sooner — which means lowered hospitalization costs — and can return to their normal daily activities much more quickly. Study after study has shown that minimally invasive procedures of various types — hysterectomies, heart surgeries, cancer surgeries and many others — are less likely to result in complications and death than more invasive surgeries.

Which is why a new report from Johns Hopkins University, demonstrating that the use of minimally invasive surgery still varies widely, over a decade after McKernan and Saye’s first operation, is somewhat surprising. In a study published online in July in the journal BMJ, researchers looked at four laparoscopic procedures: appendectomy, hysterectomy, colon removal (colectomy) and lung lobectomy, and consulted the Agency for Healthcare Research and Quality’s national database for hospitalizations for these procedures during 2010.

Training — or the lack of it — may be one of the primary reasons for the gaps in availability of minimally invasive surgeries, the authors suggest. “Residents and fellows learn in an apprenticeship model, yet for many, the surgeons they learn from may lack advanced skills in minimally invasive surgery,” they write. “In a survey of U.S. obstetric and gynecology residency programs in 2006, only 69 percent had formal laparoscopy training.”

Even more recently, a survey of surgery residency program directors published in the American Journal of Surgery in 2011 found that less than half (47 percent) had dedicated rotations in minimally invasive surgery, ranging from two to 11 months. “Minimally invasive surgery training for surgical residents needs to increase opportunities so that they are able to perform laparoscopic procedures with confidence,” the authors concluded.

More and more options are opening up for minimally invasive surgery. Surgeons at the Cleveland Clinic are now operating on some brain tumors by making an internal incision through the nose, rather than opening the skull and potentially disrupting the frontal lobes, a less risky procedure that requires only four to six weeks of recovery instead of three to six months. Orthopaedic surgeons can now do hip replacements with minimally invasive techniques. Less invasive options are also available for spine surgery to treat degenerative disc disease.

With seemingly no end in sight to the possibilities for less-invasive surgery, training opportunities will certainly need to be expanded. At the same time, there will also be some surgeries that for the foreseeable future — either because of the type of operation or because of the patient’s own specific needs — will need to be performed with more “open” techniques. Either way, access to the most appropriate surgical procedure for your medical condition shouldn’t depend on where you live or what hospital you happen to visit.