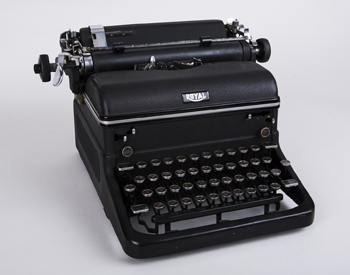 “One Nation With News for All” features items such as a Frank Bolden typewriter used during World War II.

While the Pledge of Allegiance does not directly mention a democratic press, the Newseum has consecrated a new exhibition around the notion of “One Nation With News for All.” Representing the first partnership between the Newseum and the Smithsonian Institution, “News for All” showcases the stories of immigrant and minority groups who strived to personalize and share their American experience through media.

“We wanted people to walk away with a better understanding of how their various ethnic communities contributed to the American experience,” said Sharon Shahid, the exhibit’s lead writer.

What began as a conversation between Smithsonian Secretary Wayne Clough and Newseum CEO James Duff developed into a full-fledged historical experience roughly one year later, with 60 featured artifacts — including abolitionist Frederick Douglass’s pocket watch and the press passes used by pioneering Univision anchors Jorge Ramos and María Elena Salinas — to illustrate the story of minorities in media. These individuals grew tired of seeing mostly white, English-speaking publishers and journalists either misrepresent or entirely exclude their communities from the news and created their own forums to fight for recognition and for their rights. 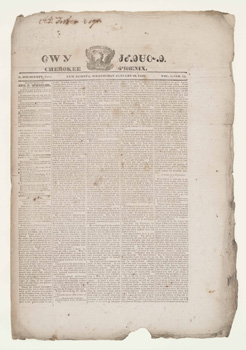 A copy of the Cherokee Phoenix, circa 1829, the first Native American newspaper printed in the U.S., still in existence today.

Since the publication of America’s first German-language newspaper Philadelphische Zeitung in 1732 by Benjamin Franklin, more than 3,000 media organizations now offer news in different languages, from Amharic to Yiddish. Franklin recognized the increasing influence of the German population — the largest ethnic group in America in the 18th and 19th centuries — and decided to publish the newspaper with his high school-level grasp of the language. While his particular venture proved unsuccessful, other German publications took off, providing newcomers to the United States with an important connection to the homelands they left behind. Today, one in four Americans turn to ethnic media for their news.

These outlets also connected Americans to growing immigrant populations. Politicians use ethnic media to woo voters — Abraham Lincoln shrewdly bought a German newspaper in Illinois — while businesses use it to reach consumers.

“We wanted to challenge communities to see how they fit in with the American journey,” said Shahid.

Various programming will complement the exhibition. For example, Radio One founder Cathy Hughes, featured in “News for All” as heading the largest black-owned broadcast company in the country, spoke about her experience at the Newseum in August. With 50 radio stations, the company reaches 82 percent of the nation’s African-Americans with a variety of programming tailored to the American black experience. On the exhibition’s opening weekend in May, Afro-American Newspapers publisher John J. Oliver and Washington Informer publisher Denise Rolark-Barnes led a discussion on the state of African-American press. The event fittingly coincided with the 60th anniversary of the landmark Brown v. Board of Education decision that deemed separate public schools for black and white students unconstitutional. 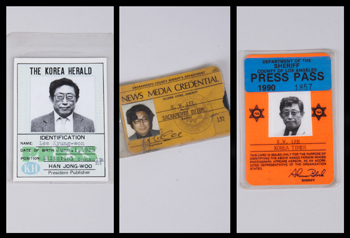 The initial exhibition script was about 30 pages, according to Shahid, as attempts were made to comprehensively represent the spectrum of existing minority media. The final product includes a balanced representation of groundbreakers and those who paved the way for their respective communities. To further ensure the inclusion of all minority press, the exhibit has a wall showcasing the front pages of various ethnic newspapers. The pages are rotated every Wednesday — a total of 10 papers displayed per week — with headlines not commonly found in mainstream papers.

But minority publications have often broken into the mainstream — and history. The murder of 14-year-old Emmett Till received international attention after gruesome photos of the boy’s body were published in Jet magazine in 1955, part of a campaign to document injustices in the Jim Crow South. In the Japanese-American community, James Omura of the Rocky Shimpo was the only journalist to cover the military draft of young Japanese men in detention camps. While reporting on the draft resistance movement, Omura was charged with conspiracy to counsel draft evasion, but was later acquitted on free speech grounds. In 1985, Mexican-American photographer Octavio Gomez was awarded $195,000 in a lawsuit after U.S. agents confiscated his camera while he was covering immigration protests for La Opinion; it was the first lawsuit filed on behalf of Spanish-language media. 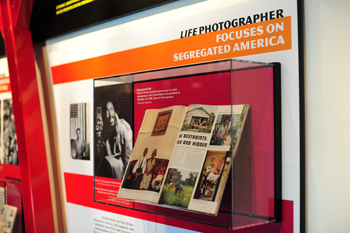 More recent controversies are also covered in “News for All.” For example, the exhibit highlights the work of AngryAsianMan.com, a blog founded in 2001 by Korean-American Phil Yu that features Asian-American news and pop culture. Yu also blogs about discrimination against the Asian community, which was up in arms in 2002 when Abercrombie & Fitch came out with offensive caricatures on its T-shirts. One of them, displayed in the exhibit, features the slogan “two wongs can make it white.”

The impact of these varied media outlets is indeed far-reaching, reflecting and catering to the country’s diversity while at the same time touching Americans of all stripes. Ethnic media has shaped history and continues to have a powerful presence today, as seen in the explosive popularity of Spanish-language networks. It’s not only a source of news, but also pride for each ethnic community — whether it be African American, Asian, Spanish or Native American. “The best feedback we received was from the various ethnic media who walked away feeling proud,” Shahid said.

One Nation With News for All

Sarah Alaoui (@musingsdiffused) is a contributing writer for The Washington Diplomat