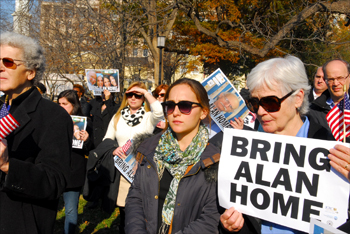 Alan Gross, a Maryland subcontractor who’s been jailed in Cuba since 2009, might have been a free man today had the U.S. Agency for International Development — which indirectly employed Gross at the time of his arrest — not continued its aggressive program to “promote democracy” on the communist island.

At least that’s what a former CIA expert on Latin America and Senate aide to John Kerry is telling the media.

In an interview with Newsweek, Fulton Armstrong claimed that in 2010, he — along with his counterpart on the staff of Rep. Howard Berman (D-Calif.), chairman of the House Foreign Affairs Committee — had gotten USAID to agree to back off from some of its more aggressive Cuba programs. Such a deal, Armstrong expected, would entice Havana into finally releasing Gross, which in turn would substantially improve the chilly atmosphere that had come to define the U.S.-Cuba relationship in recent years.

But that never happened. On the contrary, USAID stepped up its anti-Castro activities, which included the creation of a secret Cuban Twitter-like program known as ZunZuneo (Spanish for “hummingbird”). The Associated Press broke the ZunZuneo story on April 3, reporting that its users in Cuba were never told about Washington’s role in the text message-based cell-phone service aimed at undermining the Castro regime — “or that American contractors were gathering their private data in the hope that it might be used for political purposes.”

Those contractors, according to the AP article, “set up a byzantine system of front companies” from Spain to the Cayman Islands to hide the U.S. government’s involvement in the program and recruited unwitting executives to make the venture “look like a real business.”

Protesters hold up signs during a rally at D.C.’s Lafayette Park, across from the White House, urging President Obama to act swiftly to bring about the release of USAID subcon-tractor Alan Gross from a Cuban jail. The December 2013 demonstration marked the fourth anniversary of his arrest.

Since the exposé, the White House and USAID have adamantly denied that the program was a covert campaign to overthrow the Castro regime. Rather, they say it was a “discreet” program aimed at breaking the government’s tight grip over information.

On April 10, Sen. Robert Menendez (D-N.J.), chairman of the Senate Foreign Relations Committee and a vocal Castro opponent, said the program was a worthwhile endeavor that was in line with the U.S. government’s mission to promote democracy abroad and “create a free flow of information in closed societies.” Yet even he demanded that USAID Administrator Rajiv Shah turn over all records having to do with ZunZuneo as part of a broader review of the agency’s civil society efforts worldwide.

Sen. Jeff Flake (R-Ariz.), who advocates lifting the U.S. embargo against Cuba, said USAID’s involvement in the program was “ill advised” even though it might have been legal. “Do we want to continue to fund programs like this that, in my view, might put other USAID contractors or individuals from other countries, including Cuba, that participate in this program in danger?” he asked.

Other lawmakers flat out questioned why USAID would undertake an initiative more suited to a spy agency like the CIA, endangering its reputation as a humanitarian organization in countries such as Pakistan that are already skeptical of U.S. aid programs and their true intent.

“Dumb, dumb, dumb,” was how Sen. Patrick Leahy (D-Vt.) described the program after Shah dodged his question about who initiated the idea for the social network, saying he did not “specifically know.”

“If you’re going to do a covert operation like this for a regime change, assuming it ever makes any sense, it’s not something that should be done through USAID,” Leahy said.

The fallout from the AP story was so great that USAID was compelled to post a counter-article, “Eight Facts About ZunZuneo,” on its website.

The AP story, it said, “contained significant inaccuracies and false conclusions about ZunZuneo, which was part of a broader effort that began in 2009 to facilitate ‘twitter-like’ communication among Cubans so they could connect with each other on topics of their choice.”

It added: “The article suggested that USAID spent years on a ‘covert’ program to gather personal information to be used for political purposes to ‘foment smart mobs’ and start a ‘Cuban spring’ to overthrow the Cuban government. It makes for an interesting read, but it’s not true.” 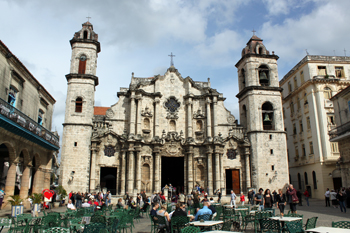 Cubans gather at the San Cristóbal Cathedral. Even though Cuba has liberalized its economy in recent years, Washington still spends roughly $20 million a year to promote democracy on the communist island.

Matt Herrick, a USAID spokesman who wrote the counter-article, also denied allegations that a shell company was formed in Spain to run ZunZuneo, or that funding was “publicly earmarked for an unspecified project in Pakistan,” implying that funds were somehow misappropriated.

“No one affiliated with the ZunZuneo program established a private company in Spain as part of this program. The project sought to do so if it was able to attract private investors to support the effort after USAID funding ended. Private investment was never identified, and thus no company was ever formed,” Herrick wrote. “All funds for this project were congressionally appropriated for democracy programs in Cuba, and that information is publicly available.”

USAID, which oversees an annual budget exceeding $20 billion, spends roughly $20 million a year — less than one-thousandth of the total — on its various Cuba democracy initiatives. Yet few things infuriate Havana’s communist regime more than U.S. taxpayer-funded programs like ZunZuneo, which it claims seek to circumvent state propaganda by bringing news — with a decidedly anti-Castro point of view — directly to the Cuban people.

James K. Glassman, chairman of Public Affairs Engagement LLC and a visiting fellow at the conservative American Enterprise Institute, knows all about beaming the U.S. point of view to a Cuban audience. During the last two years of the George W. Bush administration, he was chairman of the Broadcasting Board of Governors (BBG), which among other things directed the Office of Cuba Broadcasting — creators of the controversial Radio Martí and TV Martí.

Glassman told The Washington Diplomat that while “the Cubans do have access to some information, it’s a real shame what’s going on” given the outrage over ZunZuneo by certain members of Congress.

“In general, the program is a good one. The question of whether USAID ought to be involved is another matter,” said Glassman, who also served as Bush’s undersecretary of state for public diplomacy. “In my view, there are other government agencies as well as private organizations that are much more appropriate to handle this kind of venture. I don’t think this is USAID’s area of expertise.”

The Gross family is even more outraged.

Scott Gilbert, a Washington attorney representing Gross, said his client launched a weeklong hunger strike (that he has since ended) upon learning of the existence of the ZunZuneo program, which at any rate fizzled out in 2011 due to lack of funding.

“Once Alan was arrested, it is shocking that USAID would imperil his safety even further by running a covert operation in Cuba,” Gilbert said in a statement released April 18. “USAID has made one absurdly bad decision after another. Running this program is contrary to everything we have been told by high-level representatives of the Obama administration about USAID’s activities in Cuba.” 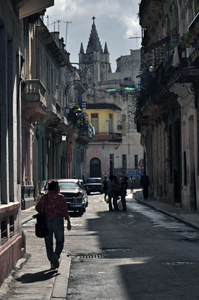 Gross, whose Maryland company had a USAID contract to provide Internet access to Cuba’s tiny Jewish community, was arrested Dec. 3, 2009, on suspicion of subversive activities. He had made four previous trips to Cuba on behalf of his employer, Bethesda-based Development Associates International, bearing sophisticated computer gear designed to let Cubans communicate beyond the reach of state security. Gross was sentenced to 15 years in prison and has reportedly lost more than 100 pounds behind bars.

The USAID subcontractor issued his own statement from prison, telling news media that “I am fasting to object to mistruths, deceptions and inaction by both governments, not only regarding their shared responsibility for my arbitrary detention, but also because of the lack of any reasonable or valid effort to resolve this shameful ordeal. Once again, I am calling on President Obama to get personally involved in ending this stand-off so that I can return home to my wife and daughters.”

Mavis Anderson, who heads the anti-embargo Latin America Working Group, said in an email that the White House and USAID “have made various public statements showing sympathy and kind thoughts for Mr. Gross and his family” while urging Cuba to unconditionally release him on humanitarian grounds.

“But they have yet to accept responsibility for placing Mr. Gross in Cuba in the first place. Alan Gross was carrying out a USAID-funded program to create a subversive Internet connection for Cubans. Unilaterally demanding Mr. Gross’s release has been unsuccessful for the past four years. Now is the time for the U.S. government to sit down with the Cuban government, without preconditions, and talk about securing Mr. Gross’s return to his family in the United States.”

“USAID’s ‘discreet’ democracy promotion programs are counterproductive, irresponsible and a waste of U.S. government resources,” said Marc Hanson, WOLA’s senior associate for Cuba. “They put at risk those that implement them — such as Alan Gross — as well as their beneficiaries in Cuba. They provide the Cuban government with a rationale to suppress dissent, claiming that all dissidents are mercenaries financed by the U.S. government. They weaken the standing of independent reformers inside of Cuba and achieve nothing in terms of change inside Cuba.”

Armstrong told Newsweek that Havana was fed up with Washington’s various attempts at regime change over the years under the guise of democracy promotion and humanitarian assistance.

“When Gross was arrested, Cuban officials gave pretty clear signals of two desires for his release,” he said. “That the programs be made less blatant and insulting to them, and that the Obama administration designate a serious, non-bureaucratic person to discuss this and other matters with them.”

But funding for Cuban democracy-promotion programs has become a cottage industry in Washington, and a lifeline to many NGOs, regardless of their actual impact on the ground in Cuba. And even though the island has gradually liberalized its economy in recent years, any talk of ending Washington’s nearly 55-year embargo, which has failed to dislodge either Fidel Castro or his brother Raúl from power, is considered heresy to Florida’s powerful, hard-line voting bloc of Cuban exiles. That, in turn, makes reforming U.S. policy toward Cuba a political nonstarter for Democrats and Republicans alike and why schemes like ZunZuneo, whether smart or not, aren’t likely to go away anytime soon.

“The way in which ZunZuneo was designed, organized, funded and implemented indicate the use of covert methods and techniques, using third countries such as Costa Rica, the Cayman Islands, Spain and even Pakistan; keeping congressional authorities in the dark and withholding information regarding such programs and even violating laws that prohibit the sending of messages without the consent of the recipient,” he said. “Yet hundreds of thousands of messages are being sent to Cuba, not to mention collecting personal data, including polling to gauge the political tendencies of the subscribers.”

Amuchastegui, a former Cuban intelligence agent who defected to the United States in 1994, mocked USAID’s defense of ZunZuneo as just another democracy-promotion effort.

“It’s just a matter of facilitating access to harmless, inoffensive, innocuous information about the weather and sports — not at all a covert operation but ‘discreet,’” said the ex-spy, his words dripping with sarcasm. “In the context of WikiLeaks and the Snowden-NSA scandal, such wording seems like a gross attempt to manipulate a bunch of suckers, meaning the American public — including you and me.”