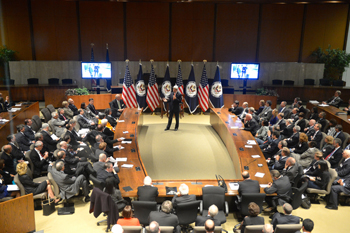 When Secretary of State John Kerry and his top deputies start talking about the president’s fiscal 2015 budget request for diplomacy and foreign aid, they like to remind their audience first and foremost that American taxpayers only pay one penny on the dollar for the entire area of international affairs. Reading in between the lines, it’s a plea to Congress not to give a haircut to the $50.1 billion — representing barely 1 percent of the full federal budget — that President Obama requested for foreign operations and assistance.

In past budget battles, diplomacy was often seen as low-hanging fruit — ripe for spending cuts. This time around, both the administration and the international community have reason to be cautiously optimistic that Congress will authorize a figure close to what Obama requested — which includes a base budget of $40.3 billion for the State Department and USAID plus $5.9 billion for Overseas Contingency Operations.

In terms of absolute value, it’s a modest proposal: It’s slightly less — by about $700 million — from what was enacted for 2014, and as a consequence, it’s likely to be viewed as reasonable and realistic.

Secretary of State John Kerry speaks with America’s top diplomats during the Global Chiefs of Mission Conference on March 11 at the State Department. The annual event brings together U.S. ambassadors from around the world.

And of equal or greater importance, the government spending levels for fiscal year 2015 have already been set.

With agreements in place on a spending ceiling, there is less to fight about, ostensibly.

That doesn’t mean there won’t be lots of politicking and posturing; this is Washington after all. Expect the usual grandstanding and dramatic rhetoric that accompanies Beltway negotiations about money, but keep in mind that the rules of the road for this debate have already been set.

While the parameters of the international affairs budget may be relatively clear, there is still plenty to chew over as to how the money gets distributed.

With this proposal, Obama is “clearly doubling down on his legacy issues,” said Casey Dunning, a senior policy analyst at the Center for Global Development, pointing to the planned investment for Power Africa and Feed the Future.

Announced in June 2013, the Power Africa initiative aims to double access to power in sub-Sahara Africa, where more than two-thirds of the population lacks electricity. The goal is to bring more than 10,000 megawatts of cleaner and more efficient electricity to six countries in particular: Ethiopia, Ghana, Kenya, Liberia, Nigeria and Tanzania. Supported by six US government agencies, it calls for a $7 billion commitment over five years, with most of it coming from infrastructure investment and little from direct appropriations.

As the name suggests, the Feed the Future program is an effort to end hunger worldwide. Back in 2009, Obama kicked off this effort by pledging $3.5 billion in American support over three years to advance food security globally. The request this year is up $1 billion, roughly 5 percent, from its previous allocation.

The Obama administration conceived of these initiatives and appears “keen to see some actual progress there by putting some resources behind them,” Dunning said.

In addition to fostering the development of his signature programs, the Obama budget places a new emphasis on Syria and the Arab Spring. Obama wants to expand the scope of the Overseas Contingency Operations account, which in previous years has been used only to help the “frontline states” of Afghanistan, Pakistan and Iraq, to address Syria’s ongoing humanitarian crisis. The plan provides $1.5 billion to support Syria and various transitions throughout the Middle East and North Africa.

“This shift away from a singular focus on the ‘frontline states’ represents a recognition that these three countries can no longer dominate U.S. foreign policy interests,” Dunning wrote in blog post.

The budget still requests $5.1 billion for programs for Iraq, Afghanistan and Pakistan, but it admits the amount is “a significant reduction from prior years” as part of an effort to “right-size” financial commitments with the end of two wars.

Some other areas receiving notable increases include international peacekeeping, the Millennium Challenge Corporation and operational support for both USAID and the State Department. As part of the administration’s Asia pivot, funds for the East Asia and Pacific region have been bumped up to $1.4 billion. The fiscal blueprint would also invest $4.6 billion in securing overseas missions — seen as a critical area since the 2012 attack on the U.S. consulate in Benghazi that left four Americans dead. That figure includes $2.2 billion to construct new embassies in Saudi Arabia, Mexico and elsewhere. 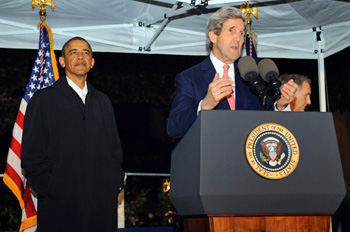 Not everybody can be a budget winner, however, and some programs are facing cuts. Funds for global health and general humanitarian assistance are being dropped 4.6 percent and 25 percent, respectively.

“If you look at the burn rate right now for everything going on around the world, and you assume that things will get a bit better through 2015, what they proposed [for humanitarian aid] is probably fine,” said a former congressional aide with expertise on foreign assistance budget matters. “The administration’s position is that there is enough money in the pipeline.”

But Mercy Corps, a global development organization, is worried the proposed cuts are dangerous.

If enacted, these cuts “will put the lives of millions of people at risk,” Andrea Koppel, a vice president at Mercy Corps, said in a press release. “We must preserve the ability of the United States to respond effectively to international emergencies … and support the tens of millions of people around the world who are driven from their homes each year by conflict and natural disaster.”

Experts interviewed for this story predict that Congress is likely to restore the humanitarian budget funds to what was authorized in 2014.

Apart from increasing and decreasing funds in different areas, the budget also includes ideas for new projects and programs.

Regarded as a legacy item of USAID Administrator Rajiv Shah, the 2015 budget request includes support for creating a U.S. Global Development Lab, or simply “The Lab.” The idea is to bring USAID to the foreground of innovation by expanding the use of science, technology, innovation and partnerships to help people lift themselves out of poverty. A key part of the concept is an ongoing partnership with the private sector. According to USAID, the Lab has already secured 32 “Cornerstone Partners” representing $30 billion in investments.

The 2015 request also unveils some attempts at creative financing mechanisms. The Millennium Challenge Corporation, for instance, is exploring the idea of tying payments more directly to measurable policy results through pay-for-performance or cash-on-delivery schemes.

While the Obama blueprint gives the reader a lot to think about, it’s important to pause and remember that the administration merely makes a request. Congress does the actual work of haggling over the figures and appropriating the money.

If everything went according to plan, which it never does, Congress would finish the budget process by the end of September. Instead, it has become customary for lawmakers to pass a continuing resolution to fund the government, as opposed to an appropriations bill, which is typically preceded by a nasty fight between Democrats and Republicans.

The deal cut by Ryan and Murray, however, should make the appropriations process somewhat smoother this year. Additionally, both sides of the aisle increasingly recognize that continuing resolutions are an ineffective way to fund government.

When Kerry testified before the House Appropriations Committee in March, Chairman Hal Rogers (R-KY.) vowed to pass the individual appropriations bills and save the international community from “the tyranny of continuing resolutions.” They are “herky jerky,” he said, and “your staff can’t make proper plans.”

That said, whatever Congress passes certainly won’t be the mirror image of the Obama request. Everybody has their pet projects and preferences and some of them will be reflected in the final product.

Ryan is already shopping around a plan that gives foreign diplomacy and aid 11 percent less than what the administration wants. Other lawmakers will make their preferences known at budget hearings over the coming months.

In a similar vein, Senate Foreign Relations Chairman Robert Menendez (D-N.J.) applauded the effort to trim spending on Afghanistan and Pakistan but lamented the fact that funding for Western Hemisphere affairs was taking a 21 percent hit from 2013 levels. “But along with my concerns about Western Hemisphere issues, I’m also concerned that there are significant reductions in humanitarian assistance and global health accounts,” he said.

Expect more grumblings from members of both chambers and both parties on what is and isn’t included in the proposal. They offer clues as to what the lawmakers may fight for as they wrangle over the appropriations bill.

Throughout the budget process, Kerry wants Congress not to lose sight of the critical role America still plays on the world stage.

“On issue after issue, people depend on American leadership to make a difference,” he recently testified. “[W]hether it’s South Sudan, a nation that many of you helped to give birth to and now a nation struggling to survive beyond its infancy; or Venezuela, where leaders are making dangerous choices at the expense of the people; or in Afghanistan, where this weekend millions defied the Taliban and went to the polls to choose a new president; or on the Korean Peninsula, where we are working with our allies and our partners to make sure that we can meet any threat and move toward the denuclearization of the Korean Peninsula.

“People rely on the United States of America to lead in instance after instance,” Kerry said. It’s a fraction of the taxpayer dollar that goes to foreign diplomacy and aid and “I am amazed by the return on that investment.”

Eliza Krigman (@ekspectacular) is a contributing writer for The Washington Diplomat.