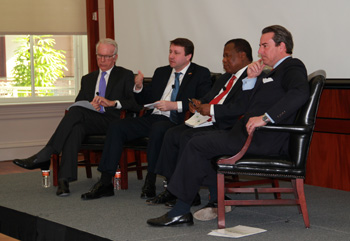 Since 2005, the Gallup polling firm has been asking average people around the world what they think of U.S. leadership.

The latest report offers even pessimists a glimmer of good news: While the image of U.S. leadership was weaker at the end of President Barack Obama’s first term than at any point during his first administration, the numbers rebounded in 2013 — despite foreign policy obstacles ranging from Iran’s nuclear ambitions and Syria’s civil war to stalled Arab-Israeli peace talks and outrage in Europe over NSA spying.

“While not a full recovery to the 49 percent approval measured at the start of Obama’s presidency, it ended a downward trend,” according to a summary of the poll’s results. “Asia and Europe largely led improvements, with the 45 percent median approval rating in Asia the highest Gallup has measured in the region during either the Obama or the Bush administrations.”

The 20-page summary was presented during an April 10 breakfast at Gallup’s Washington headquarters, in conjunction with the Meridian International Center. The 100 or so attendees were representatives of 26 foreign embassies including two ambassadors: Moldova’s Igor Munteanu (see related cover profile) and Nigeria’s Adebowale Ibidapo Adefuye.

“This is the most comprehensive project ever when it comes to attitudes toward the United States,” Jon Clifton, managing director of the Gallup World Poll, said of the U.S. Global Leadership Project, a joint effort between Gallup and Meridian to gauge international opinion.

This most recent leadership survey interviewed some 1,000 people in 130 countries last year. “Nearly every country from Bhutan to Swaziland to Turkmenistan was included,” Clifton said. “We even surveyed Somalis for the first time. We went out to all these countries and asked people how they felt about America.”

Clifton gave a slideshow explaining what lengths Gallup goes to in order to capture all that information.

“A lot of times, you read about surveys conducted online. But we went through a very robust process,” he said as images on an overhead screen depicted people being polled in such far-flung places as Costa Rica, Kyrgyzstan and Madagascar. “In China, we didn’t just do surveys in Beijing and Shanghai. And 80 percent of the time, they were done not by phone but face to face.”

Clifton added: “There are some countries where men cannot interview women. So we needed to come back with a female interviewer. We go back up to three times if necessary. All the data that’s in here took about 10 months to collect.”

Nine of the 10 countries where U.S. leadership scored the highest are in Africa — led by Guinea (90 percent), Senegal (88 percent) and Mali (83 percent). Yet on the flip side, nearly all of the countries where U.S. approval ratings experienced double-digit losses in 2013 were in Africa — a reflection perhaps that, “given Obama’s Kenyan heritage, many Africans likely expected Obama to pay more attention to Africa than they perceive he has,” according to the report.

Adefuye echoed this view. In Nigeria, which with 170 million inhabitants is Africa’s most populous country, 60 percent of respondents viewed U.S. leadership favorably in 2013 — down from 71 percent a year earlier.

“There were very high expectations after Obama’s inauguration,” Adefuye said. “We thought the U.S. would pay more attention to Africa. We expected more.”

Opinions about American leadership in Europe, however, recovered somewhat this year, up from 36 percent in 2012 to 41 percent. Approval numbers in Asia were also some of the highest recorded in recent memory, perhaps a sign that “the image of U.S. leadership may be benefiting from the administration’s attempts to strengthen its alliances and trade partnerships throughout the Asia-Pacific region,” the report said.

Conversely, the worst scores are found in the Middle East and South Asia, with approval ratings of 18 percent in Lebanon, 15 percent in Iran, 13 percent in the Palestinian territories and only 9 percent in Yemen. Interestingly, despite the civil war there and handwringing over whether the United States should become involved, Syrian approval of U.S. leadership jumped from only 4 percent in 2008 to 26 percent last year. Even the dismal approval figure in Iran was a big improvement over the 9 percent reported in 2011.

Perhaps not surprisingly, even before the Ukraine crisis, Russia continued to have a low approval of U.S. leadership, at 16 percent.

Yet if the Gallup numbers are to be believed, Ukrainians aren’t impressed with U.S. leadership either. Only 34 percent of those polled in that country approve of the Obama administration’s policies, compared to 47 percent who look upon the Kremlin favorably.

Munteanu, commenting on Moldova’s perceptions of the United States, praised Secretary of State John Kerry’s recent trip to his small country and noted that by the end of April, Moldovans would be able to take short trips within the European Union’s Schengen zone without the need for visas.

“We are the first country of the Eastern Partnership to receive this benefit,” he said. “Our people look with great admiration to the EU because they want the same level of certainty about their future, and they want a stable business environment. This kind of partnership is fully supported by the United States.”

Yet opinions in the region remain torn, according to experts with the Center for Strategic and International Studies (CSIS) who recently analyzed a separate Pew Research Center poll on U.S. power released in December 2013.

“In the case of Russia, elite and public perceptions of the United States have been declining since Vladimir Putin returned to the presidency in May 2012,” said Andrew Kuchins, director of the CSIS Russia and Eurasia Program. “Other states in the ‘post-Soviet space,’ who feel more threatened by Moscow’s born-again assertiveness, find themselves in an awkward position. There is a natural inclination for them to desire stronger ties with the United States but skepticism that Washington is really prepared to deliver much of value to them.”

Echoing those doubts, James K. Glassman, chairman of Public Affairs Engagement LLC and President George W. Bush’s undersecretary of state for public diplomacy, told the Gallup audience that numbers praising U.S. leadership should be taken with a grain of salt.

“I would be hard-pressed to find too many observers of U.S. foreign policy who would say that our leadership is stronger now than it was 10 years ago. I think it’s more hesitant,” said the retired diplomat, who’s also a visiting fellow at the American Enterprise Institute and a frequent Obama critic. “People around the world have less confidence in our leadership.”

Why then, he was asked, did the U.S. leadership approval rating rise over the past year?

“It seems to me that leadership is equated with general favorability,” Glassman replied. “A lot of it has to do with the way people feel in their own countries.”

On that note, the Pew poll reported that a growing number of Americans believe their own global power and prestige are in decline. “And support for U.S. global engagement, already near a historic low, has fallen further,” the survey said. “The public thinks that the nation does too much to solve world problems, and increasing percentages want the U.S. to ‘mind its own business internationally’ and pay more attention to problems here at home.”

Larry Luxner is the news editor for The Washington Diplomat.