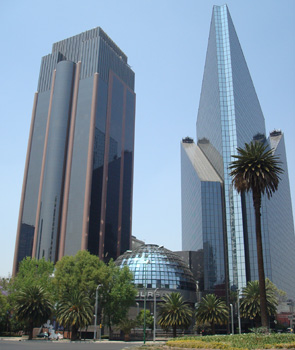 Move over, Asian tigers. It looks like the four so-called “Pacific Pumas” — Chile, Colombia, Mexico and Peru — have become the latest darlings of the investor crowd.

The four have joined forces as the Alianza del Pacifico (Pacific Alliance), a trade bloc boasting a combined population of 215 million and GDP of $2.2 trillion. Together, the four countries represent nearly 36 percent of Latin America’s total GDP and just over half of its foreign trade.

“Moisés Naím has called this the most important alliance you’ve never heard of,” said Eric Farnsworth, vice president of the Americas Society-Council of the Americas (AS-COA), quoting the prominent global thinker and syndicated columnist. “Direct, concrete steps have already been accomplished, and the United States recognizes the importance of developing an economic relationship with the Pacific Pumas.”

The Mexican Stock Exchange rises above Mexico City. A 2013 report by the World Bank found that Mexico was among the top 50 economies in the world that improved business regulation the most since 2005.

Farnsworth was one of eight speakers at a March 13 panel that analyzed why these four emerging markets are so appealing to foreign investors. The event, co-sponsored by AS-COA and the Bertelsmann Foundation, featured three ambassadors — Colombia’s Luis Carlos Villegas, Mexico’s Eduardo Medina Mora Icaza and Peru’s Harold W. Forsyth.

Also on the panel: Mauricio Hurtado, chargé d’affaires at the Chilean Embassy; Annette Heuser, executive director of the Bertelsmann Foundation; Samuel George, the foundation’s project manager; and Antoni Estevadeordal, manager of the integration and trade sector at the Inter-American Development Bank.

“The puma is a powerful, fast, agile animal that’s efficient and resourceful. This new-world cat can thrive in mountainous highlands and humid rainforests. We think it’s a fitting mascot for the emergence of Mexico, Colombia, Peru and Chile,” said George in introducing his 52-page study, titled “The Pacific Pumas: An Emerging (Pacific Alliance) Model for Emerging Markets.”

“Let’s face it. Since the global financial crisis, areas of optimism have been few and fleeting. Whenever we hear about Latin America, it’s generally negative,” he said.

“This study suggests that quietly, Colombia, Chile, Mexico and Peru have taken big strides toward stabilizing their macroeconomic foundations, making major inroads against poverty. The Pacific Alliance has created quite a buzz in Washington. If there’s one thing we can take from this conversation today, it’s that the momentum of these four countries is about more than an incipient integration pact. We believe these four have made advancements that go far beyond the scope of the Pacific Alliance.”

At present, 30 nations have official observer status within the alliance, including 10 European Union members. And in February, Costa Rica signed a declaration of intent to join the bloc, a procedure estimated to last about a year.

“It will mean a tremendous added value when Costa Rica joins,” said Peru’s Forsyth. “In digital technology, it’s probably the most advanced of all our countries, and its services sector has a lot to offer.”

Such regional integration has long been elusive for Latin America, where summits and groupings come and go with much fanfare but little measurable effect.

“The region is burdened by a heavy load of institutional debris accumulated over decades of speeches and summits. The great majority of these multilateral organizations quickly faded into irrelevance, but only a few small ones have been closed or defunded,” Naím wrote in his February 2014 article on the Pumas for The Atlantic.

“The surprise, however, is that the Pacific Alliance has already yielded more results in its 20 months of existence than similar initiatives that have been around for decades,” he added. “The four countries have eliminated 92 percent of all import tariffs among them. Chile, Colombia, and Peru have linked their stock markets so that a company listed in one of the exchanges can be traded in the other two. Mexico is expected to follow suit this year, meaning this integrated stock market will rival that of Brazil as the largest in Latin America…. In a break with tradition, the joint communiqués of Alliance presidents tend to be brief and concrete in terms of goals, timelines, and roadmaps.”

The reason why investors are optimistic that this alliance will endure where others have failed is that the Pumas represent some of the most successful, stable and liberalized economies in the region.

Coining a new buzzword — “pumanomics” — George said that despite overall turbulence in emerging markets worldwide, the four signatories to the alliance have enjoyed low inflation and strong growth. 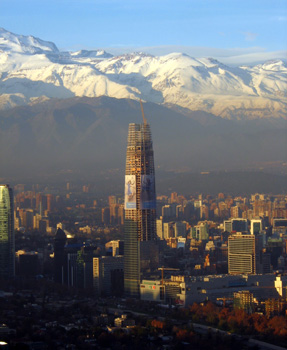 The Costanera Center, a business and commercial complex, looms over Santiago, Chile.

“In Mexico, we’ve seen their willingness to address long-term bottlenecks even at the expense of short-term growth,” he pointed out. “In Colombia, we’re seeing important steps toward establishing a lasting peace. For mid-size emerging markets like Peru or Chile, it’s imperative to find a niche in global trade. Even as the Doha Round has sputtered, these countries have created linkages the world over.”

Significantly, all four have free trade agreements with the United States, Canada and the 28-member European Union, while China, Japan, South Korea, Singapore and India have all concluded FTAs with at least two of the Pumas. In addition, Mexico, Peru and Chile are actively participating in current talks for a Trans-Pacific Partnership (TPP).

Since 2005, economic growth in the four countries (with the exception of 2009, a year of global economic chaos) has exceeded 5.5 percent. That compares favorably to the Association of Southeast Asian Nations (ASEAN), whose 10 member states averaged 4.8 percent growth over the same period.

The four Pumas also take the top four slots in the World Bank’s latest “Ease of Doing Business” survey for Latin America, and inflation has remained quite low, ranging from 1.7 percent in Chile to 3.6 percent in Mexico last year.

“These countries are far from perfect. Violence, corruption, urban and rural poverty remain a fact of life for millions, and this study does not shy away from that. But thanks to good work and timing, these four countries have a golden opportunity,” George said. “It’s not about how many FTAs you have on paper, but how many jobs you can turn them into.”

Meeting Feb. 10 in the Colombian port city of Cartagena, the four nations’ heads of state agreed to abolish 92 percent of tariffs on goods and services traded between them within a year. Tariffs on the remaining 8 percent — consisting of sensitive agricultural products like bananas, coffee and beans — will be phased out over a 17-year period.

“We have moved forward,” declared Colombian Ambassador Villegas, commenting on the Puma designation. “I want to be around when we move to the whales and lions.”

Animal mascots aside, Villegas says it’s hard to overestimate the weight of this alliance, which seeks to counter the protectionist policies of Latin America’s other leading trade bloc, Mercosur (consisting of Argentina, Brazil, Uruguay, Paraguay and Venezuela, with Bolivia as an associate member).

“This is the most important effort at Latin American integration in 100 years,” said Colombia’s envoy. “Fate brought together four heads of state who had the political will and internal muscle to take decisions that would open their economies in trade, investments and services. Now, for the first time, we’re trying to do business together in places like Eastern Europe, Asia and Africa — to have our trade officers work together and get investments for all four countries instead of just one.”

Added Mexico’s Medina Mora: “This is not a run-of-the-mill trade initiative. It’s not political, but it’s also no accident that we think alike. The Pacific Alliance members mean what they say, and then do what they say they’ll do.”

Forsyth said efforts to integrate have come in spurts since 1960, when seven countries established the Latin American Free Trade Association in Montevideo, Uruguay. By 1980 — with the addition of Bolivia, Colombia, Ecuador and Venezuela — it had reorganized into the Asociación Latinoamericana de Integración, or ALADI.

But unlike the Pacific Alliance, ALADI sought the elimination of tariffs only on goods — not services — and its members did not coordinate policies.

“The reality is that tremendous damage caused by the debt crisis destroyed our options for integration in the 1980s,” Forsyth said. “We felt we had no future.”

Gradually, he said, “We began seeing the future as a challenge, and a few of us began to exchange views. As we began sound economic policies in our own countries, the next step was to think, ‘Why don’t we start working together?’”

It’s clear that efforts by the four Pumas to tap into global trade have paid off. Spurred by strong copper prices, Chile’s trade with China jumped from $1.34 billion in 2000 to $17.94 billion in 2012, according to the Bertelsmann report. Peruvian exports to China, meanwhile, increased 42 percent between 2010 and 2012.

Chile’s Hurtado said the alliance can act as an important bridge between Latin America and the entire Asia-Pacific basin, and he promised that Michelle Bachelet — who served as president from 2006 to 2010 and was inaugurated president in March for a second term — will continue its “pragmatic, non-antagonistic” approach toward other integration mechanisms while striving for social equality at all levels.

“For many years, there have been demands to achieve a fairer society, and the new Bachelet administration will allocate a great deal of effort to achieve those goals in coming years,” he said. “Integration with Latin America is going to occupy a big part of our foreign policy efforts.”