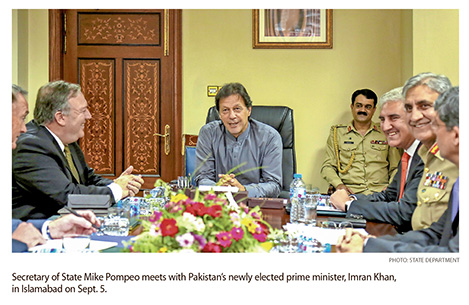 Pakistan’s new prime minister, Imran Khan, gave a 70-minute inaugural speech on Aug. 18 that included almost nothing about foreign policy — this at a time when Pakistan’s relations with its neighbors and the United States are in serious disrepair.

The reason for this is that the prime minister has very little to say about Pakistan’s foreign policy. The army controls that.

“This is politically rearranging the deck chairs on the Titanic,” said Georgetown University associate professor C. Christine Fair about Khan’s election. “In Pakistan, the army tells the prime minister what to do.”

That doesn’t bode well for improved relations with Afghanistan, India or the United States.

Former Prime Minister Nawaz Sharif “tried to improve relations with the Taliban and India, but the military blocked him,” said Aparna Pande, a South Asia expert at the Hudson Institute.

“The army has never been asked to significantly justify its budget,” Fair said. “It gets what it wants. It doesn’t even have to submit a budget.”

It also seems to have gotten what it wanted with Khan’s election. In fact, the army is suspected of interfering with the July 25 election to help Khan win. It stationed about 370,000 troops at polling places and the government gave the army authority to transport ballots to and from polling stations.

It also allegedly threatened candidates, particularly those affiliated with Sharif’s Pakistan Muslim League-Nawaz (PML-N) party. Many experts say the former prime minister stepped on the military’s toes not only by reaching out to Pakistan’s archrival India, but also by taking on terrorist groups that the army and intelligence services tacitly condoned.

In July, Sharif was convicted on corruption charges related to his family’s ownership of several expensive properties in London. While allegations of corruption are nothing new for the Sharif family dynasty, many suspect that his imprisonment was part of a military-led strategy to keep the three-time prime minister out of power.

For years, Khan, a wealthy former cricket star and notorious playboy, seemed like an unlikely political leader. But over the last two decades, he has transformed himself into a populist advocate for the poor who has embraced conservative Islam and relentlessly campaigned against bad governance and endemic corruption.

Khan’s anti-corruption platform resonated in a country where 40 percent of the population lives in poverty. And although his electoral chances were boosted by the army, the charismatic politician does enjoy broad support among Pakistanis disillusioned with the status quo. At the same time, while there is little doubt Pakistan is rife with graft, it remains to be seen if Khan will tackle corruption at the highest levels.

“Corruption in the army is just rapacious,” but Khan is not likely to try to do anything about it, Fair said.

Sharif tried to take on the generals and lost. He was sentenced to 10 years in prison (although a court suspended the sentence shortly after the election).

“No one, other than Sharif loyalists, doubts that [he] was corrupt,” Madiha Afzal, a nonresident fellow at the Brookings Institution, said in a July 6 Los Angeles Times article. “The question is whether he would be facing this had he appeased the military rather than taken it on, and the answer is probably not.”

Khan is not likely to make the same mistake.

Since Pakistan’s partition from India in 1947, the army has staged three coups and has controlled the country’s foreign policy.

The United States has been at war against the Afghan Taliban for 17 years. The administrations of George W. Bush, Barack Obama and Donald Trump have been frustrated by Pakistan’s seeming indifference to the outcome and refusal to help in any meaningful way.

Experts say that’s because Pakistan is more concerned with India gaining a foothold in neighboring Afghanistan than it is with terrorist groups that cause trouble for Kabul or Washington.

U.S. officials have long accused Pakistan, particularly its spy services, of playing a double game, helping the U.S. root out certain extremist groups while turning a blind eye to others that serve Pakistan’s geostrategic interests.

Islamabad counters that it has suffered far more casualties in the post-9/11 fight against extremism than has any other Western nation. Khan said Pakistan has borne “the brunt of the war on terror” since the U.S. invaded Afghanistan after the 9/11 attacks. The mutual recriminations have led to deep mistrust on both sides.

When Obama ordered the May 2011 raid in Pakistan in which U.S. Navy Seals killed al-Qaeda leader Osama bin Laden, the U.S. government didn’t tell Pakistani leaders about it, for fear that they would tip off bin Laden. 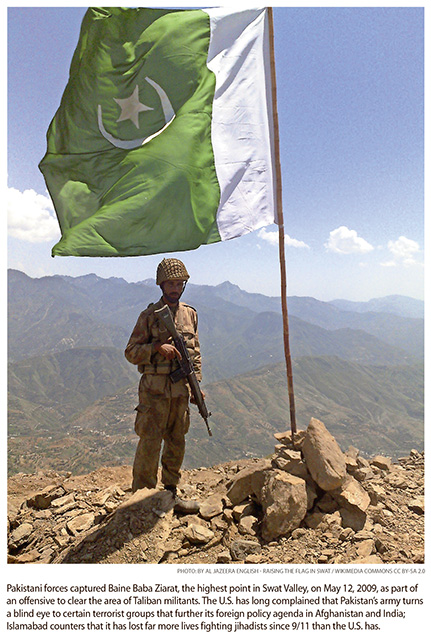 More recently, Trump suspended $300 million in military reimbursements to Pakistan for allegedly not doing enough to rein in terrorist groups.

U.S. Secretary of State Mike Pompeo also warned that the U.S. would veto any potential bailout from the International Monetary Fund to Pakistan because he said the government would use it to pay off its ballooning debt to China. Pakistan continues to accept billion-dollar loans from China, which has been building the infrastructure for the China-Pakistan Economic Corridor, part of its Belt and Road Initiative.

Pakistan’s total foreign debt is reported to be about $95 billion. That is more than 30 percent of the country’s GDP. The government is considering asking for a bailout of between $10 billion to $15 billion from the IMF.

“There’s no rationale for IMF tax dollars — and associated with that, American dollars that are part of the IMF funding — for those to go to bail out Chinese bondholders or China itself,” Pompeo said on July 30.

Pakistan’s Foreign Ministry has said it wouldn’t use any IMF money to pay off China or any other foreign creditor. Rather, it would use the funds to facilitate exports.

Money has always been a point of contention between Islamabad and Washington. Pakistan says it has spent billions of dollars and sacrificed thousands of its officers to clear out the lawless tribal regions along the Afghan-Pakistani border — at Washington’s behest. U.S. officials point out that they have given Pakistan billions of dollars in economic and military assistance — with little to show in return.

Fair even accuses Pakistan of giving some of the U.S. military aid money to the Taliban.

“I’ve been a proponent of cutting off Pakistan since 2004,” she said. “The army was taking money from the U.S. with one hand and giving it to the Taliban with the other…. What have we gotten for all this money?”

That sentiment was echoed by Trump in a January tweet: “The United States has foolishly given Pakistan more than 33 billion dollars in aid over the last 15 years, and they have given us nothing but lies & deceit, thinking of our leaders as fools. They give safe haven to the terrorists we hunt in Afghanistan, with little help. No more!”

While past U.S. presidents have not been as blunt, they, too, have temporarily cut assistance when tensions flared.

But at the end of the day, most U.S. policymakers realize they have little choice but to cooperate with Pakistan, a nuclear-armed, Muslim-majority tinderbox of 200 million people that suffers from deep-rooted sectarian strife and sits at the heart of one of the most unstable regions in the world.

Michael Morell, former acting CIA director, told Mike Allen of Axios that “Pakistan is the most dangerous country in the world,” in an Aug. 4 report on global threats

“The main reason the military has a grip on decision-making is because of a long-held and now mistaken belief in Pakistan that India is an existential threat to Pakistan and that Islamabad must do everything it can to protect itself from that threat,” Morell told Allen. “One of the areas in which this plays out is in Pakistan’s support to jihadists — in short, its support to terrorists fighting India. That support bleeds over to extremists who want to overthrow the Pakistani state itself, including al-Qaeda and the Pakistani Taliban.”

In fact, Islamic militants have killed thousands of Pakistanis in recent years, many of them Shiites, in spectacular attacks that highlight the growing schism between secularism and religious extremism in the volatile nation.

On that note, just as America can’t fully turn its back on Pakistan, Islamabad needs Washington, not only to help fight extremism at home but also to tackle bread-and-butter issues such as widespread unemployment, a failing electricity grid and an increasingly unsustainable debt load.

“No Pakistani leader is going to ask for a rupture of the relationship with the United States. Both sides realize that they need each other,” said Moeed Yusuf of the U.S. Institute of Peace. “I don’t think there are any good feelings” for Pakistan in Washington. “They will have to work together.

So for now, it seems, both sides will continue going through the motions.

Pompeo met briefly with Khan and other Pakistani leaders on Sept. 5 in Islamabad. Little if any progress was made in improving relations between the two countries or in getting Pakistan to help the United States in Afghanistan.

One bright spot, however, might be that Khan — an ethnic Pashtun like many Taliban — may help bring the Taliban to the negotiating table, a strategy the Trump administration has embraced to wind down the war in Afghanistan.

The Pakistani Foreign Ministry released a statement after the meetings saying, “The two sides agreed that present conditions in Afghanistan were conducive to intensifying efforts for a political settlement.”

The State Department said that Pompeo had “emphasized the important role Pakistan could play in bringing about a negotiated peace in Afghanistan and conveyed the need for Pakistan to take sustained and decisive measures against terrorists and militants threatening regional peace and stability.”

But Fair said Pakistan’s relations with the United States were not likely to change with Khan in power.

“It looks at first blush like something new,” she said. However, “he’s not a modernizer.” In essence, “the prime minister is the mayor of Islamabad.”