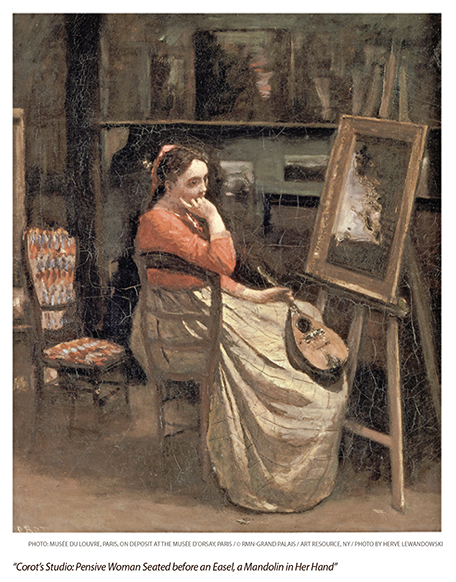 “Corot: Women” at the National Gallery of Art reveals a lesser-known side of Jean-Baptiste-Camille Corot (1796-1875), an artist known primarily for his landscape work and for connecting neoclassical French painting to the impressionist movement.

Some key components of Corot’s background can be seen in his work before they are read in his biography. He was educated; his family had money; he was both familiar with and passionately interested in the classics. He was also ambitious. Corot was driven to attain admission to the Paris Salon, the establishment authority that fueled impressionism by spurning early works by members of the movement.

It would take years, though, for Corot to earn the respect of Salon critics. The eventual recognition he garnered in the mid-1840s was largely for his landscapes. He traveled extensively throughout France and Italy, capturing the natural light of his surroundings in works that foreshadowed impressionism’s focus on plein-air painting.

Corot loved his landscapes so much that he reportedly said the only goal he could faithfully commit to in life was painting them.

But Corot also clearly loved his women. He often idealized them and depicted them with a soft, deft touch that added to their allure. In fact, the artist painted women throughout his prolific career, but these works were rarely exhibited during his lifetime.

At the National Gallery of Art, we see Corot’s figural oeuvre with 44 paintings consisting of nudes, single figures in costume and a late series of allegories focused on the artist’s studio.

In the course of the show we meet “Woman with a Large Toque and a Mandolin,” “Woman of the Swiss Highlands,” “Jewish Woman of Algeria” and the feminine muses of poetry and history. His subjects are individualized and described generously, but they remain anonymous. They often balance their heads on their hand or gaze distractedly in the distance. Only very occasionally, and later in his career, does Corot have them meet our gaze, and his titles give them stories that start to explain their circumstances.

The painting to the left of the exhibit entrance, “Italian Woman” (1872), starts us near the end of the artist’s life. The woman is posed classically, but casually; there is an informality and openness to her that invites conversation. Perhaps most important, as the exhibit’s wall description points out, Corot paints her apron like an impressionist would. 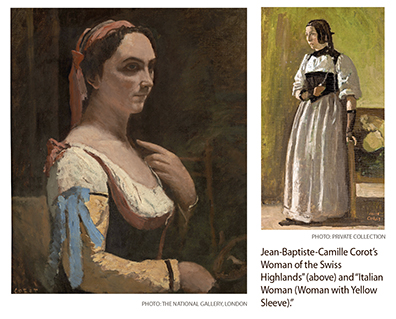 The Salon des Refusés, an exhibition of artists denied entry to the official Paris Salon, which traditionally conveyed the mark of excellence in French painting, had taken place nearly a decade earlier in 1863 and had served as a catalyst for the impressionist movement. Corot had his first painting accepted by the Paris Salon in 1827 and throughout his early career, he worked to master techniques that would help him achieve continued mainstream acceptance. Here, effectively starting near the end of Corot’s career, the exhibit shows the influence impressionists had on him, as well as Corot’s own willingness to stay open to new approaches after achieving critical success. 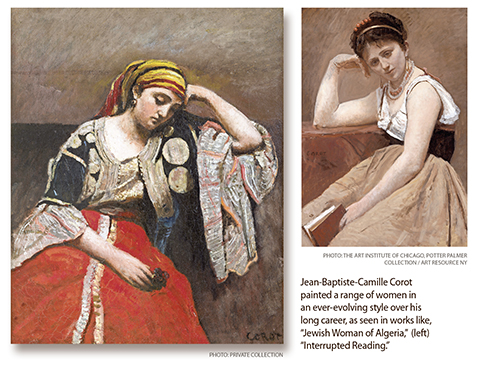 Corot seems to have kept a respectful distance from his earlier female subjects. His “Woman with a Large Toque and a Mandolin” is elegant but remote. The well-dressed woman might be responding to a lesson. In any case, she holds the instrument with some indifference. The painting presents a combination of pleasant elements (a beautiful woman, a pleasing landscape, a nice melody), but the woman seems to be a passive factor in her own scene.

Or perhaps in Corot’s eyes she is the inspiration for it, as nearby paintings suggest. Corot painted the muses of “History” and “Poetry” as sources of his era’s predominantly male work in both fields. But as inspirational figures, they are somewhat uninspiring. Both are languid, clutching scrolls in which they cannot even pretend to be interested. They seem to suggest poetry and history as pursuits if someone can’t think of anything better to do.

By “Interrupted Reading” (1870), Corot has shifted his approach. He starts to give us enough information to sketch a backstory for his subject. The title alone says the woman is put-upon; she’d rather be reading. Her direct gaze backs this up. Not particularly looking to talk, she’s waiting for the intrusion on her solitude to pass. This woman doesn’t exist solely for the male gaze. She’s the opposite of the muse figures Corot produced just a few years earlier. “Inspire yourself,” we can almost hear her say. “I’m busy.”

Corot also places women in the artistic driver’s seat. The exhibit features a series of portraits of a woman in the studio at an easel, her back to the viewer. Corot’s studio, we are told, was a social hub where young artists sought him out as a mentor and where he stored paintings that weren’t viewed publicly. Impressionism saw female painters like Mary Cassatt and Berthe Morisot achieve prominence. Corot’s interest in depicting women as artists may reflect this trend and his belief in it. Regardless, by the end of his career, Corot seems to have experienced a shift in attitudes about women, away from remote models of inspiration and toward actors with real agency in their own stories.

This evolution is the real subject of the exhibition. By the end of his career, Corot has taken women off their pedestals and met their gaze directly. The exhibit demonstrates that while Corot may have adopted the impressionists’ approach to color only slightly, he internalized the movement’s shift from classicism to a more modern approach that fully embraced his subjects.