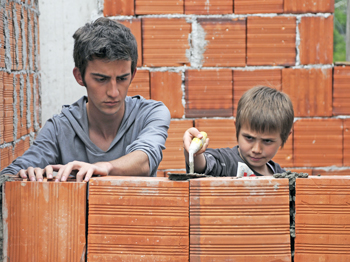 Also See:
‘Jiro Dreams of Sushi’ and ‘We Need to Talk About Kevin’ and Repertory Notes

Nik (Tristan Halilaj), left, and his younger brother Dren (Elsajed Tallalli) are forced to stay indoors after their father sparks a murderous feud in “The Forgiveness of Blood.”

In 2004, American writer-director Joshua Marston’s astonishing debut, “Maria Full of Grace,” a largely Spanish-language story about Colombian drug mules, put him on the cinematic map. His long-awaited sophomore effort, “The Forgiveness of Blood,” is not quite as brutal despite its title, but the underlying threat of violence pervades the picture. Marston got the idea for the film after reading a newspaper article about a teenager caught up in a blood feud in modern Albania, where the director spent a month conducting research.

Marston and Albanian-born filmmaker Andamion Murataj (also co-producer and casting director) co-wrote the screenplay, which won the Silver Bear for best script at the Berlin International Film Festival. Their script is brought to life by the authentic performances that the director commands from a non-professional cast recruited from the mountains of northern Albania. Marston’s naturalistic direction helps make the film’s world feel very real to the audience despite an intrinsically slow middle act.

In an opening scene, two groups of men banter at each other in a café. Sokol (Veton Osmani) ominously quips, “Sometimes the long road is shorter … and safe.” It turns out the state has granted Sokol land formerly owned by the grandfather of Mark (Refet Abazi). Later, during his bread delivery route on a horse and cart, Mark finds Sokol has blocked off his shortcut. Angry, Mark goes home, gets his brother Zef (Luan Jaha) and revisits Sokol — an encounter that results in Sokol’s death and repercussions for Mark’s entire family.

While Mark goes into hiding, Zef is arrested. According to the Kanun, a 15th-century legal code still followed in Albania, any male member of Mark’s family is subject to a revenge killing by Sokol’s family, an eye-for-an-eye form of justice. Nik (Tristan Halilaj), Mark’s 17-year-old son, is forced to stay inside the family’s house, curtailing his budding relationship with his pretty classmate Bardha (Zana Hasaj) and dreams of starting an Internet café. To be safe, his younger brother Dren also remains at home, despite technically being too young to be targeted according to the Kanun. With all the family’s males out of commission, Nik’s younger teenage sister Rudina (Sindi Laçej), an A student, has to leave school to take over the family business delivering bread.

The Kanun permits the negotiation of a mediated settlement between the families, a possibility Sokol’s family won’t discuss until Mark is in custody. Stir-crazy Nik urges his father to turn himself in, which Mark resists because Sokol’s cousin is a police officer. The film’s middle section effectively depicts the family’s growing tension and claustrophobia while living in a prison partly of their own making. 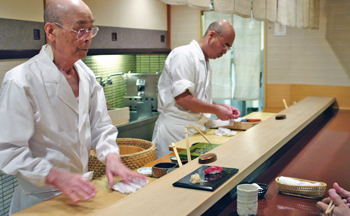 Sushi master Jiro Ono, left, and his son Yoshikazu work in the father’s Michelin-three-star restaurant in the documentary “Jiro Dreams of Sushi.”

“Jiro Dreams of Sushi,” American director-producer David Gelb’s impressive feature film debut, succeeds as a straightforward biography of Jiro Ono, an 85-year-old Japanese man regarded by many as the world’s best sushi chef. Gelb’s restrained direction is worthy of his Japanese subject. Like Jiro’s sushi, the documentary’s minimalist style appears clean and simple, which gets the job done very well.

Jiro owns Sukiyabashi Jiro, the first sushi-only restaurant awarded the coveted top three stars by the prestigious Michelin guide, an honor held by only about 80 restaurants worldwide. His tiny 10-seat restaurant is surprisingly situated in the basement of a Tokyo subway station. Patrons must wait at least a month to get a reservation for a 15- to 30-minute meal that costs 30,000 yen (about $375), only to get infamously curt service from Jiro, who doesn’t tolerate any special requests.

Food writer Yamamoto wonders, rhetorically, how Jiro’s sushi can be so simple yet so delicious. Its surface simplicity belies the complexity behind Jiro’s sushi-making process. His store buys ingredients only from specialists who are the very best in their field: fish, rice, seaweed, soy sauce, wasabi, etc. An apprenticeship under Jiro, a Shokunin (traditional sushi master), takes 10 years to complete. Jiro stresses the importance of every detail, requiring much practice to perfect, which he personally inspects before every meal. As a workaholic, “Jiro dislikes holidays. They are too long for him,” says Yamamoto.

Jiro’s young sons saw so little of their father that when he slept in one Sunday, his younger son Takashi asked his mother, “Who’s the strange man sleeping here?” During his rough childhood, Jiro was abandoned by his father. Despite his absence from home, Jiro has certainly loved and cared for his own sons, who treat him with proper filial respect and a modicum of fear. Younger brother Takashi has been able to partially escape his father’s orbit by heading the family company’s second sushi restaurant in another part of Tokyo. It’s joked that customers say they can get the same quality sushi at Takashi’s restaurant without being intimidated by Jiro.

Jiro says, “Although I’m 85 years old, I don’t feel like retiring yet.” As the eldest son, Yoshikazu is expected to succeed his father, for whom he’s still working at age 50. Yoshikazu is conscious of the difficulty of his position in Jiro’s large shadow, lamenting that people wouldn’t say his sushi is as good as Jiro’s until it is actually twice as good. Yet Yamamoto notes that it was Yoshikazu who actually made the sushi for Michelin’s inspectors that earned his father’s restaurant three stars. 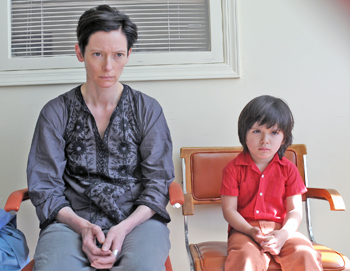 Tilda Swinton, left, struggles with her sociopathic son (Rocky Duer) in “We Need to Talk About Kevin.”

Scottish actress Tilda Swinton (“Michael Clayton,” “Burn After Reading,” “I Am Love”) delivers another haunting performance as a mother at her wits’ end in Scottish writer-director Lynne Ramsay’s “We Need to Talk About Kevin.” Ramsay’s long-awaited third film (after 2002’s “Morvern Callar” and 1999’s “Ratcatcher”), set in New York City and its suburbs, was adroitly adapted from Lionel Shriver’s highly regarded best-selling novel by Ramsay and co-writer Rory Stewart Kinnear.

The chronologically fragmented story, artfully depicting the frazzled state of mind of Swinton’s lead character, gives Ramsay a chance to show off her directorial talents with a mesmerizing visual montage.

In a modest New York suburb, Eva Khatchadourian (Swinton) lives what seems to be a tormented life, looking frazzled and unhealthily skinny. She has to scrub red paint off her weathered cottage. A strange woman punches her in a parking lot, to which she doesn’t respond or accept help. She willingly takes home eggs cracked by strangers at the supermarket, later picking up shells out of her omelet. When two young men in suits carrying briefcases appear at her door, she’s understandably alarmed before they ask her what she knows about the afterlife.

She laughs, saying, “I’m going straight to hell. Eternal damnation, the whole thing.” She’s serious. Apparently, her teenage son Kevin (Ezra Miller of “Afterschool,” “City Island”) has committed some unspeakable crime at his high school. She blames herself, at least in large part, so she willingly accepts her life suffering as a form of penance. Perhaps if she’d been a better mother, a different outcome might have resulted.

Flashbacks reveal that Eva is an accomplished travel writer who’s seen much of the world, as illustrated by a scene from the La Tomatina festival in Valencia, Spain, where the thrown tomatoes look disturbingly like blood. In Manhattan, she finds herself unexpectedly pregnant by Franklin (John C. Reilly of “Carnage,” “Chicago”). Her colicky baby Kevin (Rocky Duer) cries so much that she takes him into the street to be drowned out by traffic. She exclaims, “Before you were born, Mommy used to be happy! Now Mommy wakes up every day and wishes she were in France!”

As a 6- to 8-year old, Kevin (Jasper Newell) has turned into a little demon who still wears a diaper and lacks interest in nearly everything, except for a bow and arrow set. He’s conniving enough to show affection to his father, who insists that Kevin is just being a boy who needs space to run around, prompting a move to the suburbs. Kevin taunts his mother, frustrating her so much that she throws him up against the wall one day, breaking her arm. Eve and Franklin also have a younger daughter, Celia (Ashley Gerasimovich), whose sweetness only contrasts with Kevin’s increasing creepiness as a teenager.

“Robert Bresson” (March 3-April 1) is a complete retrospective of all existing films by the late French auteur (1901-99), known for his minimalist productions. The series is organized by the Cinemathèque Ontario with assistance from the Cultural Services of the French Embassy, the Institut français, and Paramount.