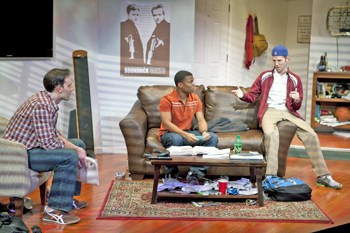 Paul Downs Colaizzo’s clever and haunting premiere of “Really Really” at the Signature Theatre would likely be termed by one of the play’s 20-something characters as a “slow burn.” In the urban dictionary, “slow burn” is defined as: “to be stolen from slowly and intentionally, to have something valuable taken from you, little by little on the down low.”

In “Really, Really” at Signature Theatre, the party of the year turns into a lifetime of regret for a group of spoiled 20-something college kids played by, above from left, Danny Gavigan, Paul James and Evan Casey.

It’s not a good feeling, but one that’s hard to forget and happens to make great theater.

At the tender age of 26, Colaizzo, Signature’s youngest playwright, has penned a social commentary that creeps up on you like a slow-moving disease. During the first act, it appears to be merely a common cold; by the end of the second act, it has turned viral.

The script tries to decode the “me generation,” or what Colaizzo pontificates as the “post-abortion” generation — i.e., they’ve become “the most wanted and most loved generation” because their parents had the option not to conceive them, Colaizzo explained to The Washington Diplomat. “Really Really deals with an entire cast of characters who will stop at nothing to win,” he said.

Even those ubiquitous Apple smart phones are called “I” phones,” notes one of Colaizzo’s characters.

“What this country is now dealing with is an entire generation of self-entitled people who think that he or she is the exception to any and every rule. It’s mixed with [TV’s] Mister Rogers’s teachings of the ’90s, which taught kids you’re special for just being you. That’s when we got into the whole everyone deserves a trophy [mentality],” argues Colaizzo, who fully admits this generation includes him, which is probably why he’s obsessed with understanding its nuances.

His characters — annoyingly trendy, self-important and ambitious — use slang like “gel” for “jealous” and “gay” for “undesirable” ad nauseam. We meet most of them at the light and comical start of the play during the aftermath of a wildly reckless party given by rugby teammates. The morning after the party, the boys are full of superficial bravado about their exploits amidst their beer can-strewn apartment, while the girls are in their separate apartment nursing hangovers. 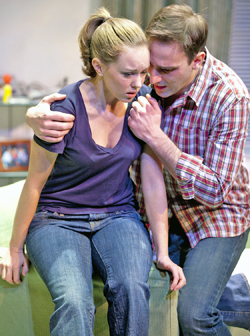 What starts out to be banal hijinks among a group of upper-crust college kids takes a menacing and calculating turn that resembles the poignancy of an Edward Albee creation. Accusations are made, alliances break down, and while the characters experience harmful consequences for their greed, the audience’s respect for our current social climate nevertheless disintegrates.

Colaizzo was inspired to write this play by a few events. One was a national scandal in the news a few years ago involving college students accused of a crime; the other was the successful Broadway production “Doubt,” an exploration of ambiguity and whether that ambiguity matters; and the third was Colaizzo’s own experiences traveling around the country and observing what real America was like, he explained.

Colaizzo himself is on the fast track to success, and in that way at least, he resembles the ambitious characters he creates. A graduate of New York University, he started out as an actor and penned “Really Really” in the backseat of a 10-passenger van while on tour as a cast member of “Great Expectations,” his first gig out of college. He switched to playwriting full time in 2009 and landed an associate writer position for Broadway’s “Sister Act” and a reading of his play “Pride in the Falls of Autrey Mill,” directed by David Schwimmer. “Really Really” was read at the Kennedy Center’s Page-to-Stage program and Matthew Gardiner, the director of the show at Signature, sent the script to Signature Artistic Director Eric Schaeffer.

Although he was at first incredulous when Schaeffer decided to produce “Really Really,” Colaizzo has already penned two more scripts as a follow-up, which he hopes Signature will take on. “Really Really” is the first part of a “loose dramatic trilogy,” Colaizzo said. “It is the ‘want’ play, as in I really, really want it; the second is titled ‘Little Gives,’ about how this generation deals with what we give up, and the third in the series is ‘Dog’s Tale,’ or the thing about getting.”

“In 2007, this was a play about an entire generation, but by the end of 2008 [after the recession hit], this was a play about the truly resilient,” Colaizzo explained. “I write about the psychotomy in American contemporary life,” he added, referring to what the urban dictionary defines as “a mental condition where a person’s personality seems to have been split into two opposite and distinct behavioral patterns emerging randomly.”

Maybe the younger “me” generation does suffer from too many options, overwhelming media and technology, and the residual American greed of the ’80s and ’90s. Whatever the case, this play shows us that maybe really, really wanting something is not reason enough to get it.