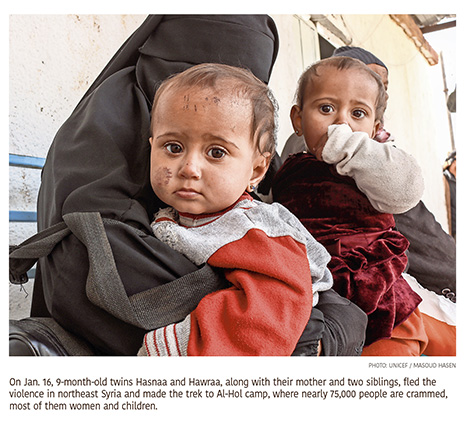 In the camp at Al-Hol in northeast Syria, some 74,000 men, women and children — many injured and traumatized by years of war — are currently crammed into tents and makeshift huts in terrible conditions.

Many of them arrived in the span of just a few days, back in March, while escaping the fighting as U.S.-backed Kurdish forces eliminated the last holdout of the Islamic State around Baghouz, some 200 miles to south.

Among the people in these camps, however, are not only innocent people caught up by the conflict, but also Islamic State fighters and their families from Syria, Iraq, other Middle Eastern countries and the West.

Around 90 percent of them are women and children, according to the International Committee of the Red Cross (ICRC), with thousands of young kids now exposed to these dire circumstances. At Al-Hol, figures from the U.N. Office for the Coordination of Humanitarian Affairs (OCHA) indicate that 65 percent of the camp’s inhabitants were under the age of 18 as of March 31.

“These children are victims,” Elodie Schindler from the ICRC told The Washington Diplomat. “War has robbed them of their childhood.”

Yet, while few would disagree that these camps are no place for minors, the thorny question of what should be done about them — and their parents — is one that many seem unwilling, or unable, to face.

Caught between strategic considerations, international and local politics and security concerns, Islamic State families are now in limbo — a status that many now regard with increasing alarm.

“What we are talking about here could be catastrophic, and is getting more dangerous by the day,” warned Fawaz Gerges, professor of international relations at the London School of Economics, who has long studied this issue.

The danger, first of all, is because Al-Hol and camps like it lie within an open battlefield, where Islamic State (ISIS) cells still operate and where territory is disputed between a host of local and international players.

In this contested, volatile landscape, the number of U.S. and other Western special forces continues to dwindle as President Trump seeks their withdrawal.

While Trump has triumphantly declared that “100 percent” of the Islamic State’s self-styled caliphate has been defeated, experts warn that the group itself is still very much alive — and active.

“Territory the size of the United Kingdom has been liberated and over 100,000 ISIS militants reportedly killed. However, we remain a long way from victory,” wrote Charles Lister, director of the Countering Terrorism and Extremism Program at the D.C.-based Middle East Institute, in a recent brief.

Like other experts, Lister points out that thousands of Islamic State fighters have gone underground and are waiting to regroup. James Jeffrey, the U.S. special envoy for Syria, estimated there may be 15,000 to 20,000 fighters in Iraq and Syria, many in sleeper cells.

As the group steadily lost more of its territory, it adopted guerrilla-style tactics and has now morphed back into a more traditional terrorist organization. Today, the Islamic State continues to launch attacks in Syria, Iraq and elsewhere, and according to the United Nations, it may have a war chest of between $50 million to $300 million to help finance its operations. Moreover, the conditions that gave rise to the movement in the first place — poverty, corruption, lack of governance, sectarian hostility — still exist across the war-torn region.

In addition to those fighters who slipped away, tens of thousands are languishing behind bars with nowhere to go, creating another breeding ground for radicalization.

“At least 30,000 to 40,000 ISIS members lie in squalid prisons in Syria and Iraq and more than 150,000 former ISIS residents live in secured [internally displaced persons] camps with no future prospects for a meaningful life,” Lister wrote. “Amid these numbers are tens of thousands of children who are stateless and likely to receive no help to recover from the trauma of their ISIS experience and probable indoctrination.”

In this highly dangerous geography, there is the growing fear of an Islamic State resurgence, especially inside the camps, and its children.

The longer these people remain in limbo, the greater their risk of radicalization. Children in particular are vulnerable to Islamic State ideology propagated by unrepentant parents and by group members who still work within these ramshackle camps. There’s even a term for what the Islamic State calls this indoctrinated children: “cubs of the caliphate.”

“There is no program to de-radicalize them,” said Kamal Chomani of the Tahrir Institute for Middle East Policy, “while there is a lot of fear of ISIS members within the camps that prevents people from breaking ranks with them.”

Those members include many women who remain loyal to the group and have attacked camp residents whom they see as impious, as reported by Erin Cunningham in an April 19 article for The Washington Post. “While there are scores of instigators, the ranks of those who remain staunchly behind the Islamic State could still number in the thousands, and they are committed to upholding its ideology even as the self-declared caliphate has been brought to an end,” Cunningham wrote.

The Kurdish forces responsible for security at these centers — members of the U.S.-backed Syrian Democratic Forces (SDF) or the Kurdish People’s Protection Units (YPG) — lack the capacity to do much within them, both in terms of personnel or facilities.

The region is already home to hundreds of thousands of displaced people, with communities and infrastructure shattered by years of brutal conflict.

The Kurdish forces responsible for security at these centers — members of the U.S.-backed Syrian Democratic Forces (SDF) or the Kurdish People’s Protection Units (YPG) — lack the capacity to do much within them, both in terms of personnel or facilities.

The region is already home to hundreds of thousands of displaced people, with communities and infrastructure shattered by years of brutal conflict.

“You’re talking about a huge task here,” said Gerges. “The Kurdish authorities simply do not have the capacity on their own to address the growing dangers.”

That applies to Kurdish-run prisons where Islamic State fighters are holed up. The SDF has already warned that if it does not receive more resources, it may have to begin releasing thousands of prisoners in its custody. Moreover, no one wants to take responsibility for the detainees. Those who are imprisoned in Syria and sent to Iraq, for example, face life either in jail or tightly controlled camps.

The Islamic State is also likely to take matters into its own hands to free its comrades in arms.

Many remember how prison breaks in Iraq helped bolster the insurgency there, initially boosting al-Qaeda’s ranks, while also providing the hard-core militants who later constituted the backbone of the Islamic State itself.

On April 6, these fears were heightened when the Islamic State made just such an attempt to break out followers at the Derik detention center in the Kurdish-administered part of northeastern Syria — a region known to Kurds as Rojava. While unsuccessful, the attempt set off alarm bells across the region. 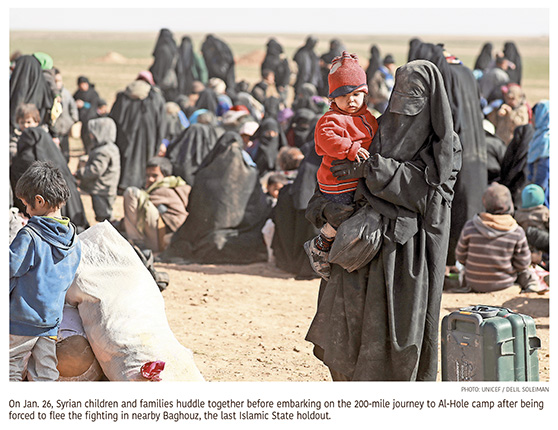 There is also tremendous pressure for Islamic State militants who participated in atrocities — and who may still be in the camps — to be brought to justice.

“It is very important to see justice is done, for those whose families and friends were massacred by ISIS, and also to prevent future atrocities from taking place,” said Chomani. “The other issue is, if they are not tried and then if they are released, everyone will assume they are guilty — and in this part of the world, people taking their own revenge is very common.”

The Kurdish authorities have proposed a tribunal to examine cases in the camps, with international participation and funding. Yet this faces several challenges.

First, as Chomani points out, “Rojava is not internationally recognized.” The legal authority of any tribunal might therefore be questioned from the beginning, without some kind of international recognition. This in turn would be anathema to countries such as Turkey, which have declared the Kurdish-controlled area an “existential threat.”

At the same time, a huge vetting process in the camps would be necessary to identify the real militants.

“The ICRC strongly advocates for crimes committed during an armed conflict to be investigated and punished,” said Schindler. “But under these challenging circumstances, it is paramount that states don’t lower their legal and protection standards. These challenges are global in nature and cannot be solved by one state alone.”

Such an initiative would therefore require major international participation.

“If you just send them all to Iraq,” said Gerges, “well, you know what the Iraqis will do.”

Indeed, after negotiations with U.S. officials, Baghdad has offered to take the detainees, saying it would do so for a payment of $10 billion, followed by a further $1 billion a month, the U.K.’s Guardian reported April 10.

Yet the deal also reportedly stipulated that no humanitarian workers be granted access to the detainees and that no objections be made to the use of the death penalty.

At the same time, the ICRC, and many groups on the ground, argue that Western countries should repatriate for trial their nationals who are among the Islamic State detainees.

“This would spread the burden,” said Chomani. “It would also help focus attention on what has been happening here back in Western countries. Trials back in Germany, for example, would help people there understand the terrible things that have been going on.”

So far, however, there has been extreme reluctance in many Western countries to accept back any of their nationals who volunteered to join the Islamic State and traveled out to fight for or otherwise support it.

“In the U.K., France, Belgium, repatriating these people is hugely unpopular,” Gerges said. Often, they are seen as traitors and also potential security threats in countries that have suffered major terrorist attacks from the Islamic State in recent years. “So Western domestic politics is also complicating this whole issue.” 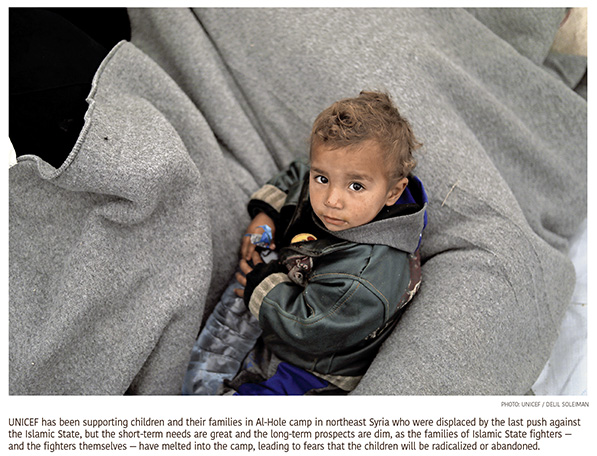 Sins of the Parents

Thus, thousands of children remain in limbo, suffering for their parents’ sins.

A case in point is that of British national Shamima Begum. A teenager who went to Syria to join the Islamic State, she became a detainee at Al-Hol, where she gave birth to a boy, Jarrah. Her plea to be returned to the U.K. was met with authorities rescinding her citizenship, soon after which the boy died of pneumonia.

“Women and children are particularly vulnerable,” said Schindler, “and must receive special protection. It is paramount that they continue to be considered civilians. Children, even those accused of committing crimes with armed groups, are first and foremost victims and must be detained only as a last resort. The children in this story deserve our humanity, not our hatred. These children are victims who must not be punished for the sins of their parents.”

Some children have since been repatriated by other countries. France took five orphans of Islamic State members in early April, while Germany has taken back “a high, single-digit figure” number of minors in recent weeks, according to the German Foreign Ministry.

But that represents a minuscule fraction of the thousands of children who’ve been tainted by being born into an Islamic State family — not to mention the hundreds of thousands of other children across the Middle East still suffering from war and destitution.

“Who knows what will happen to the Kurds, too?” asked Gerges. “The camps are exposed and vulnerable on an open battlefield that could easily deteriorate into war between the Kurds and Turkey. Meanwhile, the whole question has become entangled in geostrategic issues and domestic politics in Europe. It is something that has to be treated more seriously. It’s really not going away.”