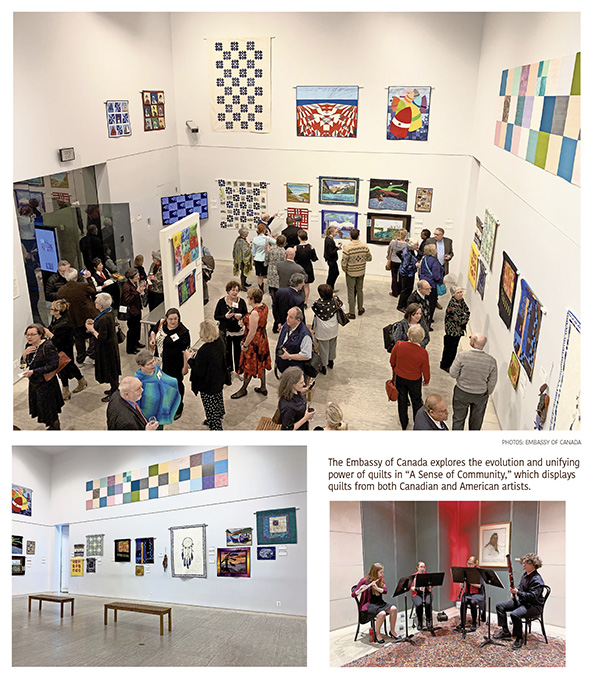 When the early settlers came to North America in the 17th century, quilts were a central part of their lives, as they had few ways to stay warm in the cold winter months. But quilting as an artform is fairly recent.

As women joined the workforce after World War II, quilting became less of a practical necessity in the home and more a canvas for expressing history, identity and values. It also served to bring together different communities where people could share techniques, ideas and even participate in quilting guilds, both local and international.

The Embassy of Canada explores this evolution and the unifying power of quilts in the exhibition “A Sense of Community,” which displays quilts from both Canadian and American artists.

“The idea that we wanted out of [this exhibition] is a community within cultures, a community between Canada and the U.S., and how we can get inspired and learn by others.” Kate Grumbacher, the curator of the exhibit, said.

The project was started by Canadian quilters who designed patches for the Houston International Quilt Show, the largest in North America, in 2017. They decided that each quilt would have to include a “nine patch,” a quilting technique that uses block patterns and dates back to the 1800s, and that the overarching theme would be Canada’s 150th birthday and reflecting on what being Canadian means to them. With the help of the Canadian Consulate in Dallas, they displayed the patches in the show, and then gave them to the embassy in Washington, D.C.

“We thought that they were beautiful quilts and they were wonderful to show,” Grumbacher said. “But then [we thought] it would also be kind of neat to see what would happen if we had American quilters come in and make something to go along with them.”

Each American artist sewed a patchwork inspired by the Canadian quilts. The artworks featured traditional aspects of Canadian culture, with nature, wildlife and the maple leaf commonly depicted, paired with American works. Mary Pal, a professional artist from Canada, juried the American quilts, which were selected to highlight the contrasts and similarities between the United States and Canada.

“The reasons for the pairings varied and viewers may enjoy the challenge of seeking the connection between two pieces,” Pal said. “Some are connected by color palette, some by motif and others by subject matter.”

Two such quilts, for example, were “Paint the Town Jelly Bean” by Shelley DeHay-Turner, a Canadian artist, and “Painting the Towns” by Linda Strowbridge from the United States. Both feature vibrantly colored neighborhood homes found in Newfoundland, Canada, on the one hand, and Baltimore, Md., on the other.

Another highlight of the show is a quilt from 1908 that served as a wedding gift for the bride from her sister, Jessie. It illustrates the historical role of quilts as family heirlooms — each telling a unique story that gets passed down from one generation to anotther.

The quilters used a laser technique to print the postcards and pictures into the quilt fabric. The family — which still lives on the same farm that Jessie grew up on — plans to create quilts documenting their heritage for every future generations.

“They wanted to tell the story. I thought it was a really good way to display history,” Grumbacher said, “and be linked to family.”

During the opening night of the exhibition, 42 quilts were on display, and 18 of the artists — 11 from the United States and seven from Canada — attended the event. Grumbacher said the exhibit made them proud to show off their work, which is not always seen as a distinct form of art with its own long history.

“A lot of the folks you see here, some are hobbyists, but some of these people are professionals and artists,” Grumbacher said. “They are taking a traditional path and trying to put an artistic spin on it, so you’re getting really unique pieces.”

A Sense of Community: Canadian and American Quilters

Clara Longo de Freitas is an editorial intern for The Washington Diplomat.