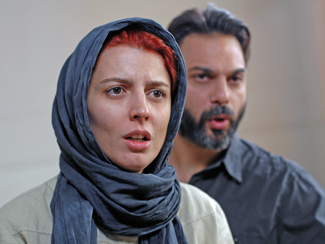 Leila Hatami, left, and Peyman Moadi portray a middle-class couple whose divorce frames a sociopolitical commentary on modern Iranian life in “A Separation.”

Asghar Farhadi’s “A Separation” claimed four prizes at the prestigious Berlin International Film Festival, including the coveted Golden Bear Award for Best Film. The Iranian writer-director’s fifth feature deploys a fierce kinetic visual style, packed full of chaotic action, to paint a clear picture of modern life in Iran, even though one might initially imagine such a cause and effect seems contradictory.

Farhadi’s smart script offers a steady stream of delicious details that reveal ever-increasing insight, as viewed through the prism of an unusual courtroom drama. Behaving in other ways like a subtle thriller, the vivid story is brought to life by the uniformly solid ensemble cast members. Their naturalistic performances lend authenticity to the underlying nervous tension inherent in people trapped in the prison of living in an authoritarian state, regardless of their differences in class, education or religion.

After finally completing the lengthy process of obtaining all the proper travel documents and visas required to emigrate from Iran, Simin (Leila Hatami) finds her long-time dream of a new, better life for her middle-class family abruptly dashed. Her husband Nader (Peyman Moadi) decides he can’t abandon his elderly father (Ali-Asghar Shahbazi), who suffers dementia caused by advanced Alzheimer’s disease. In court, Nader is willing to consent to a divorce that would permit his wife to leave without him, but he declines to let her take their 11-year-old daughter Termeh (Sarina Farhadi, the director’s real-life daughter) despite purportedly enhanced education prospects abroad. After the judge denies her petition, Simin goes back to her parents’ house while their child stays with her father.

Without Simin at home to care for his father, Nader must quickly hire a caregiver, Razieh (Sareh Bayat), who accepts the position without the permission of her long-jobless husband, Hodjat (Shahab Hosseini), because their family badly needs the income. But Razieh’s execution of her duties is complicated by her devout religious beliefs that make it a sin for her to clean up Nader’s father after he wets himself. Nader agrees to let her turn the job over to her husband, but the position is acceptable as he’s a male. Plus, Hodjat is jailed by a creditor, forcing Razieh to reluctantly return to the job.

But after she leaves the father unattended, Nader becomes furious with her, forcing her out of his house with a push that precipitates a fall, after which she has a miscarriage. Razieh’s own mercurial spouse becomes livid when he finds out the work she’s been doing, which he believes to be immoral, that led to the accident. They file a complaint and Nader faces prison if found guilty by the court’s investigation, which itself serves as a proxy for an astute sociopolitical analysis of the inner workings of contemporary Persian culture. 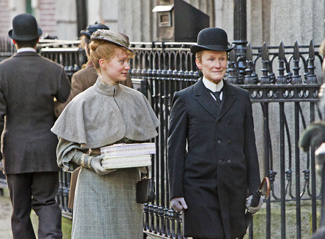 An Irish woman who’s adopted the persona of a man (Glenn Close), right, embarks on a delusional courtship of a hotel maid (Mia Wasikowska) in “Albert Nobbs.”

Colombia-born director Rodrigo García (“Mother and Child,” “Nine Lives”), whose work has typically taken place in modern American society, bravely ventures into uncharted territory (for him) with “Albert Nobbs,” a sedate period piece set in 19th-century Ireland. Its startling screenplay was adapted from Irish author George Moore’s short story by actress Glenn Close, novelist John Banville (winner of the Man Booker Prize) and Gabriella Prekop. What one might consider to be a daring experiment succeeds in depicting a fascinating story within a well-crafted motion picture — albeit with deep flaws such as tediously slow pacing and an underwhelming directorial style.

For 30 years, an Irish woman has adopted the persona of a man, Albert Nobbs (Glenn Close), in order to make a living as a waiter, most recently in a hotel where she also boards. One day, the boss assigns a visiting painter, Hubert Page (Janet McTeer), to share a bed with Nobbs. Unable to deal with the risky situation, Nobbs is practically paralyzed with fear that her identity will be exposed and made public, for which she would lose her job and end up in the poorhouse. Her new roommate does indeed discover Nobbs’s true sex but doesn’t expose the secret. Instead, Nobbs eventually learns Page’s own shocking secrets.

Those revelations set in motion Nobbs’s delusional courtship of hotel maid Helen (Mia Wasikowska). Though not a real man, Nobbs intends to wed Helen to gain a practical partner who would co-manage a tobacco shop Nobbs plans to open using decades of savings. Nobbs’s pursuit of Helen persists despite the fact she has no interest and has been sleeping with another hotel worker, Joe (Aaron Johnson). After Helen gets pregnant with Joe’s child, Nobbs’s infatuation with marrying Helen only intensifies.

When the movie concludes, the audience must face the unavoidable fact that “Albert Nobbs” still feels largely lifeless despite flashes of acting brilliance. Yet the film may be worth seeing just for the world-class thespian turns. Its absolute highlights are a pair of astounding performances by esteemed actresses Glenn Close and Janet McTeer, both completely mesmerizing on screen as they become fully immersed inhabiting what could well be the top roles of their entire careers. The dynamic duo is supplemented by an all-star international cast including Wasikowska, Johnson, Brendan Gleeson, Jonathan Rhys Meyers, Brenda Fricker and Pauline Collins. 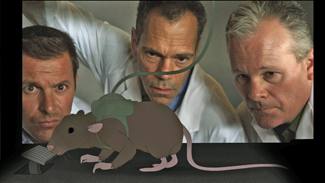 Scientists gather to observe a rather animated test subject in a re-enactment from the documen­tary “Addiction Incorporated.”

“Addiction Incorporated,” an information-packed documentary produced and directed by Charles Evans Jr. (producer of “The Aviator” and “The Brave”), thoroughly recounts the evils of the American tobacco industry over 30 years. Eschewing a narrator, the film relies largely on a litany of talking heads who speak their own revealing words, occasionally with entertaining personal anecdotes.

The range of interview subjects includes scientists, attorneys, government officials and tobacco industry insiders (who are given a chance to tell their side of the story, providing a degree of balance to the film’s coverage). Evans supplements the scientific explanations by deftly using animation to illustrate scientific concepts. Other documentary techniques used effectively include stock footage and scene reenactments, especially of old events lacking existing footage.

Yes, similar stories about Big Bad Tobacco have now been told repeatedly in various forms: print and broadcast journalism, feature films like the Oscar-nominated “The Insider,” etc. (Indeed, Jeffrey Wigand, the real-life subject of “The Insider,” is one of the tobacco industry figures interviewed.) “Addiction Incorporated” differs in its approach by largely — though not entirely – focusing on the heroic personal saga of scientist Victor DeNoble, a former researcher for Philip Morris.

In 1976, DeNoble earned his doctorate in experimental psychology from Adelphi University, followed by postdoctoral fellowships researching drug abuse. In the 1980s, DeNoble was hired by Philip Morris to make a safer version of nicotine that lowered the risk of heart disease so that smokers would have longer lives during which time they could buy more tobacco. Of course, the money would only continue to pour in if the safer nicotine was just as addictive. DeNoble’s research efforts were successful, which had the unintended side effect of producing conclusive scientific proof that nicotine was in fact addictive. The tobacco industry and its lawyers had long resisted such evidence going public as it would increase their exposure to litigation. As such, Philip Morris closed DeNoble’s lab, fired him and his colleagues, and hid their research deep in the vaults.

Under pressure in a congressional hearing, the president of Philip Morris released DeNoble from his confidentiality agreement, and in 1994, DeNoble was the first Big Tobacco insider to divulge that the industry had intended to make “a maximally addictive” product. From there, DeNoble worked with mass partnering litigation attorneys to sue the tobacco industry, whose previous legal record of absolutely never losing a lawsuit eventually dropped to 50-50. DeNoble is depicted teaching workshops to kids about how nicotine is addictive, countering the industry’s marketing to children.