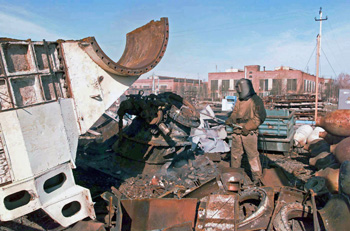 Since the Cold War ended, many people have made commendable efforts to ensure that the nuclear, chemical and biological weapons that proliferated during the 20th century won’t be used.

We ought to thank those people.

Here, I’ll start with a couple of the top guys: Thank you former Senators Richard Lugar (R-Ind.) and Sam Nunn (D-Ga.). The two of you spearheaded work on this issue when there was little interest to act in Congress. You continued to fight for a revolutionary policy that helped old enemies work together to eliminate weapons that threaten us all. Because of you, people’s lives — both abroad and in the United States — may have been saved.

The Cooperative Threat Reduction (CTR) Program, also called Nunn-Lugar — after the lawmakers who birthed it in 1992 — was designed to help Russia and former Soviet states secure and dismantle their weapons of mass destruction, including nuclear, biological and chemical weapons stockpiles and infrastructure.

A shipyard employee uses a cutting torch to break down a Russian ballistic submarine at the Little Star shipyard in Severodvinsk in 1996 as part of the Cooperative Threat Reduction Program, a U.S. initiative to safeguard and dismantle weapons of mass destruction in the former Soviet Union.

With CTR funding, Kazakhstan got rid of all its nuclear weapons in 1995, followed by Ukraine in 1996, and Belarus in 1996. In 2004, Nunn-Lugar expanded beyond the former Soviet bloc to help Albania destroy its chemical weapons. It has since evolved to neutralize chemical and biological weapons in some 80 nations.

In fact, according to the Defense Threat Reduction Agency, the program has deactivated more than 7,500 nuclear warheads, destroyed or eliminated 900 intercontinental ballistic missiles and a similar number of nuclear air-to-surface missiles, safeguarded fissile materials, converted weapons facilities for peaceful use, mitigated chemical and bio-threats, and redirected the work of former weapons scientists and engineers, among other efforts.

During remarks celebrating the pact’s 20th anniversary last year, President Obama called it “one of the country’s smartest and most successful national security programs.”

He recalled taking a trip with Lugar as a junior senator to Russia, Ukraine and Azerbaijan to learn more about the program. There, he saw firsthand vials of anthrax and other lethal agents — not exactly a typical congressional junket, the president joked.

“But visiting those facilities … seeing these old weapons once aimed at us now being turned into scrap truly brought home how important this work was,” Obama said. “And it’s a perfect example of the kind of partnerships that we need, working together to meet challenges that no nation can address on its own.”

Nunn-Lugar has undoubtedly helped to curb the proliferation of some of the world’s deadliest weapons, but the other fact we must acknowledge is that we also owe a heap of gratitude to just plain luck.

Then and now, there’s a shockingly large amount of really, really nasty stuff out there that could sicken or kill millions of people in mere minutes.

It would be foolhardy and dangerous for us to think, however, that our luck will hold out on its own. The only thing that we can count on is more hard work and more cooperation between the nations that opened the Pandora’s box of weapons of mass destruction in the first place.

That’s especially true this month as a key component of the Cooperative Threat Reduction Program is set to expire on June 17. If Moscow and Washington don’t ink a new umbrella agreement allowing Americans to continue working on threat reduction in Russia, it’s unclear exactly what will happen next, but soon, the CTR program likely won’t be able to continue in Russia in its current form.

Moscow announced last fall that it would not renew the program, saying it could do the work itself without U.S. help. In response, Obama suggested the agreement could be renegotiated and updated. Since then, however, U.S.-Russia relations have plunged even lower, and Nunn-Lugar may become a casualty of President Vladimir Putin’s increasing assertiveness against Washington.

It’s important to note that the CTR program is not without its flaws. There have been claims of corruption, for example. And, perhaps, some of the stipulations are not entirely fair to either party, such as that the United States has to shoulder much of the costs or that Russia is forced to host contractors who get a break on paying taxes for imported goods.

And, yes, the Russians might be able to perform the same work as effectively without the United States. But what if they can’t? Can we afford to find out? We’re talking about weapons designed to kill as many people as quickly as possible. Let’s not leave the world’s fate to luck.

Because of the grave concerns involved, this might actually be one of those occasions when top-of-the-lungs outrage in Congress is merited. And yet, there’s been mostly silence as lawmakers are consumed by Benghazi talking points and IRS scandals. Some are voicing legitimate concerns about Syria’s bloody civil war (also see “Congress Steps Into Syria Fray” in last month’s column), which is interesting because Syria’s possible stockpile of chemical weapons pales in comparison to Russia’s.

It’s times like these when many people who care about nonproliferation wish that Sens. Nunn and Lugar were still on Capitol Hill (Nunn retired years ago and Lugar left office earlier this year after the moderate Republican lost to a tea party challenger in the GOP primary). Few in Congress, if any, ever worked harder to reduce the risk posed by these weapons as they did 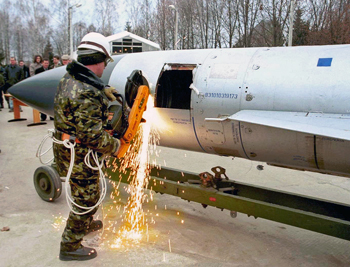 To give an idea of why they cared so dearly, one only has to consider some of the threats they saw firsthand.

In 1999, for example, Lugar, the former chair of the Senate Foreign Relations Committee, traveled to Russia’s Ural Mountains. When he arrived at a town called Shchuch’ye, he found a loosely guarded building that his aides described as decrepit. Inside were a couple million shells and warheads, each filled with potent nerve agents.

A photograph from the time shows Lugar donning a ushanka Russian fur hat, clenching in his hands a briefcase stuffed with one of the 85mm shells that contained VX, one of the most vile substances ever made — a mere droplet of which contains dozens of lethal doses.

“That single chemical round could destroy everyone in a football stadium or at least make them really ill,” said Thomas Moore, a deputy director and senior fellow at the Center for Strategic International Studies and a former staffer on the Foreign Relations Committee. Moore said Lugar posed for that photo to demonstrate how easy it might have been for someone to spirit away one of these weapons and, potentially, wreak havoc.

“After the Soviet Union collapse, this really was an existential problem for the United States and maybe most of the world,” said Andy Fisher, a longtime staffer with Sen. Lugar who accompanied him on many trips under the CTR program. “There were huge amounts of nuclear materials, chemical weapons, biological agents that were under terrific risk of being sold on the black market.”

Undoubtedly, the CTR program has helped to neutralize that threat. For example, a secure chemical weapons destruction facility was opened at the Shchuch’ye site in 2009. It was built with the help of a $1 billion investment from the United States, authorized by provisions of the CTR. Contributions to the site’s construction were also made by Russia and a handful of other countries.

The future of this sort of work is in jeopardy now, according to Moore and other observers, because Moscow and Washington have so far been unable to negotiate an extension to the accord that allows the United States to operate in Russia.

Moore told The Diplomat that he’s not optimistic the logjam will be broken.

“The way things stand now,” he said, “in just a few weeks, the current umbrella agreement will no longer be enforced and there probably won’t be one that’s ready to succeed it for quite some time.”

In October, the Russian Foreign Ministry posted the following on its website: “Our American partners know that their proposal is at odds with our ideas about the forms and basis for building further cooperation in that area. To this end, we need a more modern legal framework.”

Moore said that Russia is seeking to change provisions of the agreement that release American citizens and contractors for liability during their work in Russia and also exempt imported goods from Russian taxes.

“Both of which are nonstarters [for the U.S.],” said Moore, who did extensive work on this issue while he was with the Foreign Relations Committee under Lugar. 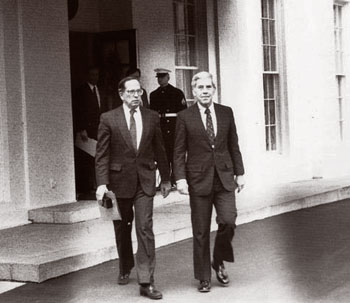 Others see more cause for hope.

“Over a 20-year period, there have been lots of ups and downs in the Russian and U.S. relationship,” said Fisher. “And the program has continued through all of that.”

Moore was quick to point out, however, that comity between Russia and the United States has all but evaporated in recent years since the Obama administration’s highly touted “reset.” Last year, for instance, the Russian government rejected any more assistance from USAID because authorities in Moscow said it was funding nongovernmental organizations that incited opposition against then Prime Minister Putin, who was running for the presidency at the time. Moscow’s arrest of an alleged CIA spy who worked at the U.S. Embassy last month certainly won’t help to warm ties.

“Basically, in the Russians’ minds, they want to normalize their relations with the rest of planet earth when it comes to post-Soviet assistance programs,” Moore said. “It’s not because they don’t want us to continue doing the things we’ve been doing, but the terms under which this cooperation unfolded were negotiated when Russia saw itself as very weak.

“Now, with a lower debt-to-GDP ratio than any member of the G20, they’ve decided that they’re sort of back. And to the extent that this assistance makes them feel weak, they don’t want it anymore,” Moore said.

“There really is no legislative fix,” Moore concluded.

Yet with the deal’s expiration looming, some in Congress are taking action. Sen. Jeanne Shaheen (D-N.H.) has said she plans to introduce a bill soon that would extend and strengthen the CTR program.

“We need to remain vigilant, to think ahead, and to anticipate where the next threats will come from,” Shaheen said in a statement to The Diplomat. “There is much work to be done, and my legislation will be aimed at expanding and modernizing our threat reduction programs to help meet the threats of tomorrow.”

As the CTR enters its third decade, one of the bright spots is that it’s begun work in new places from Asia to Africa, and whether or not it continues in Russia, it will still do work in other former members of the U.S.S.R.

But Russia remains the largest holder of weapons of mass destruction in the region.

Even if the threats can be kept at their current levels or reduced by Russia acting alone, it would be an unfortunate sign of backsliding if the two nations most responsible for introducing weapons of mass destruction to the world can’t come together to keep them from accidentally unleashing those destructive forces.

Luke Jerod Kummer is a contributing writer for The Washington Diplomat.