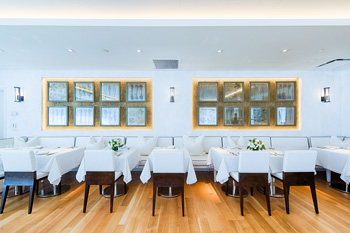 When construction began four years ago on CityCenterDC, the posh, mixed-use development in downtown Washington, some of us were a bit skeptical about the upscale chains announced as part of the restaurant roster.

Fig & Olive is an airy 10,000-square-foot space that evokes the coastal regions of the Mediterranean.

Sure, the prices at well-established eateries such as the Dallas-based Del Frisco’s and New York’s STK would allow the recruitment of capable chefs and quality ingredients, but would the new restaurants offer anything beyond standard fare done well? With the openings of international Thai powerhouse Mango Tree in February and the Mediterranean-inspired Fig & Olive in June, the answer appears to be yes.

Fig & Olive and Mango Tree both inject CityCenterDC with a welcome international flair and a chic, sexy aesthetic. The airy 10,000-square-foot space at Fig & Olive evokes the coastal regions of Spain and Italy and the French Riviera, including a 40-seat outdoor terrace reminiscent of café dining in Cannes. Mango Tree features a darker ambience inspired by its Thai roots, punctuated by European touches. Both eateries are flat-out gorgeous with their sleek lines, vibrant colors and expensive furnishings. But thankfully, neither is content to coast on its good looks.

At Fig & Olive, which also has locations in Los Angeles and New York, founder Laurent Halasz has created a modern and highly sophisticated menu based on classic Mediterranean flavors and dishes. Not surprisingly, olive oil is the star attraction (no butter on any of the dishes here).

Carpaccio de langoustine with mango lime olive oil dressing proved a near-perfect starter. Bon Appétit magazine recently hailed langoustine — a crustacean in the lobster family that looks a lot like a shrimp — as “the new marker of haute cuisine.” And based on Fig & Olive’s presentation, who are we to argue? Substantial without being heavy and succulent with a refreshing zip of lime, Fig & Olive’s approach to langoustine sets the bar high for this relatively obscure entry on the D.C. dining scene. 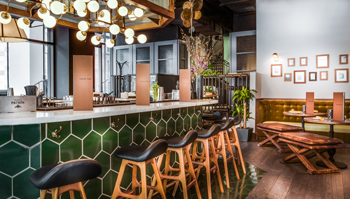 Moving on to the main course, the Provence rack of lamb was beautiful to behold, a well-prepared and attractive presentation bejeweled with glittering green herbs de Provence. However, we did find a couple of quibbles. First, the portion was a bit small, even if the flavor was big. Second, a side of cream-stuffed zucchini blossom with ratatouille and thyme juice — drizzled with a rare olive oil — was rich, maybe a bit too rich for this diner’s taste. But somehow the flavor was so subtle as to barely register.

The Chilean sea bass marinated with lemon thyme did subtlety better. The dish was light, but flavorful and tender, while a celery root puree and heirloom potato mascarpone added some earthy heft.

For dessert, a green apple sorbet with fresh mint drizzled with an expensive Marques de Griñon olive oil was a refreshing palate cleanser. The olive oil-muted sweetness of the dish served as an interesting, if unorthodox, enhancement.

A few days after enjoying dinner at Fig & Olive, we joined friends for lunch next door at Mango Tree. All of us were surprised to learn just how international this Thai restaurant group, founded in 1994, actually is. With franchises in cities as far-flung as Doha, London, Mumbai, Sydney, Osaka and elsewhere, the Asian powerhouse is literally flung all over the globe. But until last February, there was no American location. The opening of the CityCenterDC location marks the Bangkok-based chain’s first foray into the United States. 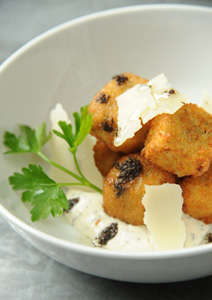 We bypassed the downstairs bar/dining area with expansive views of CityCenterDC’s bustling outdoor square and decided to head upstairs to the lush dining room instead. Good call.

The dim space, illuminated with soft natural light from expansive windows at the periphery of the room, felt cool and inviting on a sweltering summer day. Jade green and dark wood accents, along with red leather chairs, seemed especially sumptuous on a working, weekday afternoon. A blend of chill, relaxing electronica music floated softly across the room. It came as no surprise to learn that the space was designed by Lázaro Rosa-Violán, the 2013 winner of Architectural Digest’s coveted España Prize.

Our efficient and friendly server took time to explain Mango Tree’s concept, which involves cuisine from each of Thailand’s four main culinary regions: rich and fully flavored dishes from the north; spicy cuisine from the northeast; milder dishes influenced by the Chinese cooking style from the central region; and hot and spicy cuisine from the south. Mango Tree’s dinner menu features 20 different rotating entrées with 10 different desserts. The less expensive lunch offerings are fewer but still maintain an interesting degree of complexity and sophistication.

We started with traditional chicken satay, which has a tendency to arrive overcooked and chewy in run-of-the-mill American Thai restaurants. Mango Tree gets the ubiquitous dish just right. Plump, moist and steaming hot skewers of grilled chicken accented by marinated cucumber and a spicy peanut sauce jumpstarted our taste buds. A calamari green salad was more subdued, the calamari pieces dusted with a light batter and flash fried. The salad could have used a touch more of the chili-lime dressing to punch up the flavor, but the cool, tender greens and crushed peanuts made for a satisfying textural contrast.

We chose three different entrées: krapow minced pork rice, crispy catfish rice and shrimp pad thai. Each had its merits, but the shrimp pad thai — another mainstay in American Thai restaurants that often tastes uninspired and bland — stole the show. 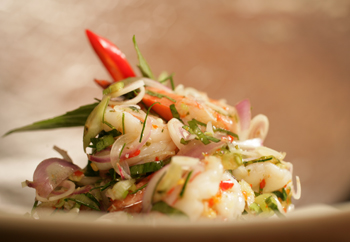 Phia goong is one of the Thai-inspired dishes at Mango Tree.

The pad thai arrived in an elegant presentation: a steaming bowl of noodles draped with a lattice cover made of egg. Once mixed and tasted, it was immediately clear that Mango Tree takes this staple to a whole new level. The noodles were tender and hot, but the shrimp, a very small variety that had been dried and then re-infused with water, had a dense texture and flavor that lent the dish a surprising heft. Flecks of diced red chilies and ground peanuts punctuated its authenticity.

The “crispy” catfish filets were anything but, though the sweet chili sauce redeemed the dish, injecting it with a pleasing and original flavor. The krapow minced pork rice offered a generous portion of pork with a steaming scoop of rice topped with a wok-fried egg. Our server encouraged us to mix it all together, so that’s what we did — to tasty effect. I had requested the pork dish Thai spicy but was disappointed to find that the kitchen either didn’t trust my Western palate with real Thai spice, or never got the message. A requested side of fresh chilies lent the dish the heat I had anticipated.

Sticky rice with coconut sorbet and crushed peanuts was a satisfying, if not spectacular, end to an enjoyable lunch.

Fig & Olive and Mango Tree and their sophisticated, ambitious menus are welcome additions to a downtown D.C. dining scene that, while improving, has long languished under the comfortable mantle of often-predictable American food.