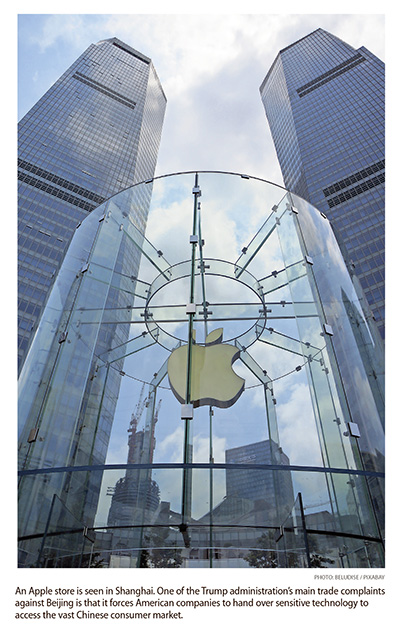 The Treasury Department on Oct. 10 began testing a new law to strengthen a little-known government agency so as to turn the screws on a well-known geopolitical adversary.

The agency is the Committee on Foreign Investment in the United States, or CFIUS, and the adversary is China, with which the Trump administration is engaged in a trade war.

The law, which Congress passed and President Trump signed in August, is the Foreign Investment Risk Review Modernization Act of 2018, or FIRRMA. It doesn’t mention China or any other country, but it’s clear that China is its main target.

“They [China] are the serial violator of the WTO,” said Rep. Jeb Hensarling (R-Texas), chairman of the House Financial Services Committee, referring to the World Trade Organization. The principal architect of FIRRMA, Hensarling recently went to China.

“I left there fairly convinced that they’re probably not going to change the way they approach our technology and our intellectual property,” he said at a Sept. 25 discussion at the Center for Strategic and International Studies in Washington, D.C. “There is a very, very strong sentiment in both parties that the spirit and the letter of the WTO are not being lived up to, that China has been particularly onerous in the expropriation by hook and crook of our technology and intellectual property.”

Since coming to office, President Trump has railed against China’s unfair trade practices, namely its alleged intellectual property theft; subsidizing of state-owned enterprises; forcing foreign firms to give up technology secrets to access the vast Chinese market; and outright espionage of critical industries.

U.S. officials are concerned that Beijing is ramping up efforts to acquire sensitive American technology as part of its Made in China 2025 strategy to increase the country’s dominance of the global high-tech sector.

Indeed, China’s U.S. investments have increasingly targeted companies that produce goods or services that are strategically beneficial to China, according to the liberal interest group Public Citizen.

“The value of investment in sectors defined by China as ‘strategic,’ including aviation, biotechnology, new energy vehicles and seven others, jumped from 25 to 56 percent from 2016 to 2017,” it said. “Such investments are crucial to China’s state-led industrial strategy and are part of a multi-pronged effort to gain competitive advantage in key sectors.”

To maintain America’s technological supremacy, the administration is beefing up a once-obscure agency whose importance has grown exponentially in recent years — but whose resources haven’t matched that growth.

Chaired by the secretary of the Treasury, CFIUS consists of the heads of nine federal departments and agencies. Its mission is to examine proposed investments in the United States by foreign companies to ensure that those investments don’t threaten U.S. national security.

FIRRMA marks the first reform of that screening process in over a decade. It passed Congress along bipartisan lines over the summer, but the White House has since sped up its implementation and signaled that it would broadly interpret the law to aggressively police foreign investment in the U.S.

Prior to the law, CFIUS had already blocked several major foreign deals since Trump took office, including a proposed takeover of California-based chip maker Qualcomm by a Singapore-based rival; a Chinese company’s $1.2 billion plan to buy Texas-based MoneyGram; and the sale of Oregon-based Lattice Semiconductor Corp. to a Chinese investor.

FIRRMA significantly broadens the scope of foreign transactions that can be blocked, including minority stakes and joint ventures in 27 industries encompassing technology, telecommunications and other cutting-edge companies. Prior to FIRRMA, only takeovers, mergers and controlling stakes fell under CFIUS’s purview. 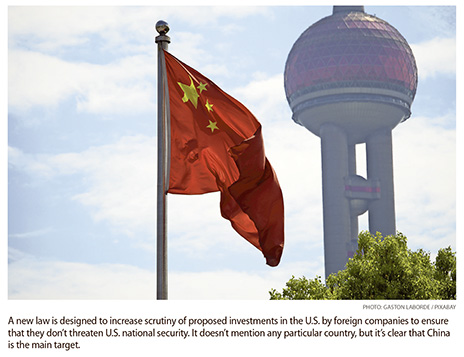 Specifically, the new law expands the agency’s jurisdiction to cover:

• Investments in U.S. businesses that give a foreign investor access to non-public, proprietary information;

When the law goes fully into effect on Nov. 10, CFIUS will have the power to block foreign investments in a wide array of U.S. firms that make sensitive technology — from semiconductors to aircraft to batteries — and those that give foreign investors substantial decision-making power over a U.S. company. Foreign investors will have to inform CFIUS of their plans. Those that don’t will be subject to fines up to the amount of the proposed investment. In the past, investors could forego a CFIUS review without any penalty. That weakened the agency’s oversight because it relies on outsiders or other government agencies to flag suspicious transactions.

Neither the Trump administration nor Congress has publicly associated FIRRMA with China, but the new areas of CFIUS jurisdiction pertain to practices for which China is known.

According to a report by the law firm White & Case, “‘Modernization’ [the M in FIRRMA] is a euphemism for addressing concerns about Chinese investments. While the Trump Administration has been firm in its messaging that FIRRMA is meant to ‘close gaps’ between the transactions that CFIUS is currently able to review and transactions it currently cannot review … the reality is that those ‘gaps’ largely pertain to particular Chinese investment trends.”

FIRRMA’s enactment worsened an already antagonistic relationship between the U.S. and Chinese governments. So far this year, the Trump administration has imposed tariffs on $250 billion on Chinese imports and China has retaliated in kind. Trump has threatened to go full bore and impose tariffs on all Chinese imports.

The Chinese government insists that it won’t be cowed by Trump’s aggression.

A result of the trade war is that China has dramatically reduced its investment in the U.S. economy.

“In the first half of 2018, Chinese companies completed acquisitions and greenfield investments worth only $1.8 billion — a drop of more than 90% from [the first half of] 2017, and the lowest level in seven years,” said a June 19 report by the Rhodium Group. Foreign direct investment stimulates local economies and creates jobs. China was the 13th-largest, and fifth-largest-growing, source of FDI in the U.S. in 2017, according to the U.S. Bureau of Economic Analysis. 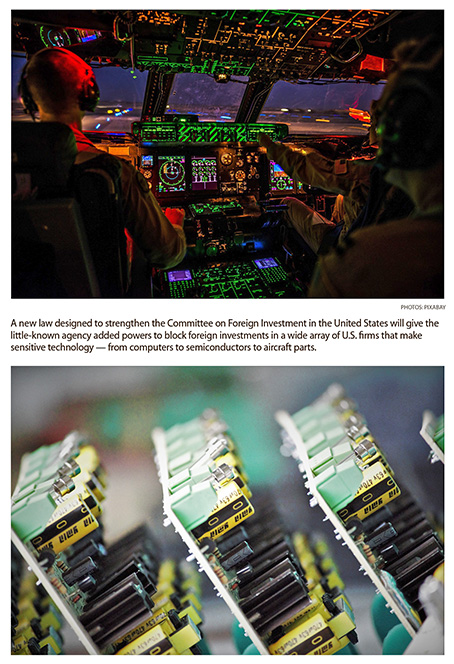 Despite the possible disruptions to economic growth and foreign investment in the U.S., supporters of Trump’s crackdown on China say it is necessary in light of Beijing’s ambitions and aggressive tactics.

“In April 2018, U.S. intelligence agencies said that Chinese recruitment of foreign scientists, its theft of U.S. intellectual property, and its targeted acquisitions of U.S. firms constituted an ‘unprecedented threat’ to the U.S. industrial base,” wrote James McBride in an Aug. 2, 2018, report for the Council on Foreign Relations. “More broadly, policymakers worry that China’s state-led model and its ambition to control entire supply chains — for instance, the cobalt industry, which powers most modern electronics — means that entire industries could come under control of a rival geopolitical power. A June 2018 White House report warned that China’s economic moves threaten ‘not only the U.S. economy but also the global innovation system as a whole.’”

Beijing counters that it’s not doing anything differently than what wealthy nations did to propel their own rapid industrialization, including state subsidies and tariffs to support homegrown industries.

A common practice among Chinese businesses is to express interest in a U.S. firm and ask to examine the firm’s sensitive and proprietary technology, which it then steals, disappearing without ever investing.

“Our firm is seeing these free-look investment schemes virtually every week and we are seeing these schemes become more refined,” said Steve Dickinson, a Seattle-based trade lawyer with Harris Bricken. “The result is always the same: no investment from the Chinese side and lost time, money and confidential information from the U.S. side. Though losing confidential information is always a disaster, the lost time and money is oftentimes even more damaging for smaller U.S. target companies, particularly for start-ups that cannot afford to wait around for magic.”

Supporters of FIRRMA say CFIUS, which was established in the 1970s, needed updating to keep up with a rapidly changing business landscape, one where more and more companies, including small Silicon start-ups, hold reams of valuable data that are used in a large number of industries.

“I knew what was critical in 1958 — tanks, airplanes, avionics. Now, truthfully, everything is information. The world is about information, not about things,” Paul Rosenzweig, who worked with CFIUS while at the Homeland Security Department during the George W. Bush administration, said in a May 22, 2018, Politico article titled “How China Acquires ‘the Crown Jewels’ of U.S. Technology.”

“And that means everything is critical infrastructure,” Rosenzweig told Politico. “That, in some sense, means CFIUS really should be managing all global trade.”

Hensarling, the architect of FIRRMA, agrees that reforms could go even further. The congressman said he had hoped the law would explicitly target China and other governments that steal U.S. intellectual property, but the finished product didn’t turn out that way.

“I think a superior process would have been to have a list [of malefactor countries] and to give people the opportunity to get off that list,” he said. “I trust in a de facto fashion we’ll end up that way.”