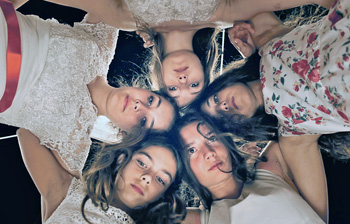 Five sisters in a coastal Turkish village lead a bleak existence after their conservative relatives effectively put them under house arrest in “Mustang.”

Orphaned for a decade after their parents passed away, five beautiful sisters have been raised by their grandmother. After the last day of school, the sisters play on the beach and swim in the Black Sea with some boys from school. When they come home, their grandmother (Nihal G. Koldas) beats each of them, one at a time. It turns out that an older neighbor spotted them, misinterpreted their innocent frolicking and reported it as a cardinal sin.

At times, the girls manage to escape to catch a soccer game or see boys, but otherwise their existence is bleak. Bars are installed on the windows — like burglar bars, but designed to keep the girls inside — while the older girls become subject to humiliating virginity inspections by male doctors who check to see if their hymens are intact.

The grandmother adorns the sisters in baggy dresses. The village elders teach them domestic chores like cooking, serving tea, sewing, etc. Neighboring families even begin to come over to go wife shopping, presenting their sons for marriage.

Yet the sisters maintain their close-knit bond, resist their repressive environment as they can and strive to define their own identity.

The nonprofessional ensemble cast’s heartfelt performances reinforce the sense of hyperrealism. Striking cinematography astutely captures the imagery that creates the unique, insular world inhabited by the film’s protagonists, while a stirring score amplifies the haunting, otherworldly atmosphere of a coastal village in northern Turkey.

‘Youth’: A State of Mind 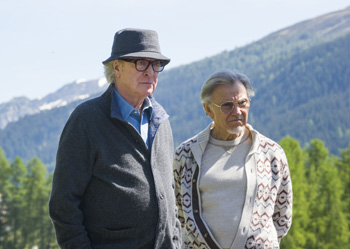 Michael Caine, left, and Harvey Keitel give tour-de-force performances as two men approaching the twilight of their artistic careers in “Youth.”

Celebrated Italian writer-director Paolo Sorrentino (“The Great Beauty,” “Il Divo”) takes another stab at making an English-language feature with “Youth.” The second time’s the charm, with markedly better overall results than “This Must Be the Place.” Often compared to Federico Fellini, Sorrentino continues to provide his audience with sweeping viewpoints full of extravagant sights and sounds. “Youth” is a cinematic pleasure from the start, with a stunning opening sequence that showcases a singing performance.

The linguistic switch to English provides the director with a unique opportunity to work with two legendary English-speaking actors, Brit Michael Caine and American Harvey Keitel, who as usual do far more than earn their keep. In fact, the leading duo’s tour-de-force performances approach the best of their careers. They are assisted by sparkling turns from a star-studded supporting cast, including British actress Rachel Weisz, American actor Paul Dano and a whopper of an appearance by classic Hollywood movie star Jane Fonda.

Retired composer-conductor Fred Ballinger (Caine) and filmmaker Mick Boyle (Keitel) have been friends for a long time. On holiday at a spa in the Swiss Alps, where Fred has vacationed for over two decades, both are contemplating the approaching twilight of their artistic careers, but they have different endgames in mind. Mick has tapped a bunch of young screenwriters to complete the script for “Life’s Last Day,” his next film and undefined “testament.”

Meanwhile, 80-year-old Fred resists his spirited daughter and assistant Lena’s (Weisz) pleas to come out of retirement. He declines the queen’s emissary (an exquisite Alex Macqueen), who offers knighthood as a reward for one final turn conducting his most well-known composition, citing “personal reasons.”

The old pals fondly reminisce about their careers and lives, but “Youth” is much more than a lot of chatter from veteran artists. In Sorrentino’s hands, the screen overflows with ravishing imagery, a stirring soundscape full of emotion and larger-than-life characters. Fonda takes the cake by summoning her inner diva to play Brenda, an over-the-top movie star who is Mick’s fiery, long-time muse.

Coming of Age in ‘Brooklyn’ 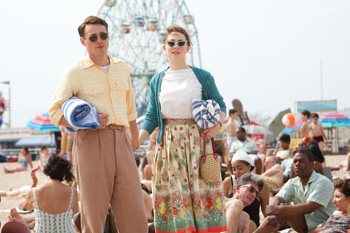 At the 2015 Austin Film Festival, “Brooklyn” proved to be a big crowd-pleaser for film festival audiences. That had been the case all year since the warm welcome for its world premiere at the Sundance Film Festival. “Brooklyn” is actually a good old-fashioned classic movie dressed up in the fancy duds of an art house film. The mainstream appeal makes “Brooklyn” a safe holiday pick for an outing at the movies.

“Brooklyn” is by no means edgy or adventurous filmmaking. But it is really good at what it does, a credit to helmer John Crowley’s steady direction as well as screenwriter Nick Hornby’s thoughtful script adapted from Colm Tóibín’s popular 2009 novel. Young Irish rising star Saoirse Ronan also shines as Eilis Lacey, a mousy Irish immigrant who transforms into a swan in the heartfelt coming-of-age tale and romance drama.

Facing dim prospects in her native village in 1950s Ireland, Eilis reluctantly leaves her widowed mother and successful, pretty sister Rose (Fiona Glascott). In search of a better life, Eilis sets sail to America, an especially scary journey by herself. She’s sent to Brooklyn into the care of a kindly Irish priest (Jim Broadbent), who sets her up with a sales job in a posh department store. He also places her in a boarding house where she joins other Irish girls, under the oversight of Ma Kehoe (Julie Walters), the wisecracking lady of the house.

Even though she’s the lucky recipient of a soft landing, Eilis is terribly lonely and homesick at first. She eventually develops some confidence from learning accounting in night school at Brooklyn College. Her fortunes pick up further when Tony (Emory Cohen), a kind Italian-American young man, meets her at a dance and asks her out. He becomes her boyfriend, providing her with warm love and support.

However, a tragic turn of events takes Eilis on an unexpected trip back to Ireland, where she seeks closure. Her village turns out to offer new possibilities that did not previously exist, including a respectable accounting position and a highly eligible suitor, Jim (Domhnall Gleeson). In actuality, the opportunities were probably never possible if she had not gone to America. Eilis now finds herself with the luxury — and conundrum — of having the option to shape her life.