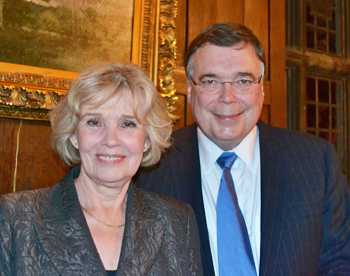 Geir H. Haarde is an Icelandic political veteran who has been through electoral success and bruising battles. A former prime minister, foreign affairs minister and finance minister, Haarde was appointed to serve as Iceland’s ambassador to the U.S. a little less than a year ago.

His wife, Inga Jona Thordardottir, intimately understands the trials and tribulations of a career in politics, having had one herself. From 1994 to 2002, she was a member of the City Council of Reykjavik, Iceland’s capital and biggest city, where she won two four-year terms. She’s also been a member of her husband’s Independent Party since she was a student at the University of Iceland.

Ambassador of Iceland Geir H. Haarde, pictured with his wife Inga Jona Thordardottir, was recently honored with the Distinguished Alumni Award from the International Student House, where he roomed while attending Johns Hopkins University.

“I’ve always had my own career,” she told us. “We have very independent ladies back in Iceland. It was always a balance between family and work. In between when I had young children, I was a housewife.”

And a busy one at that. “We have five children, two together and three we brought into the marriage,” Thordardottir said, proudly rattling off details about her brood. “Our oldest Borgar is a 40-year-old attorney; 38-year-old Ilia is finishing her master’s and works in human resources; 34-year-old Sylvia is a nurse’s assistant; 31-year-old Helga is a psychologist; and our youngest, 26-year-old Hildur, just got her BA in English and marketing. We have 11 grandchildren with another one on the way in January.

“Some people like to do only one thing,” said this versatile wife. “I like to have a variety of things in my life.”

That philosophy applies to her professional life as well. An economics major, Thordardottir has worked in and out of Iceland’s government. She was a political assistant to the minister of education and culture, as well as to the minister of health. She also worked for several local businesses and was chairwoman of the Women’s Rights Association of Iceland and of the Reykjavik City Theatre.

At the University of Iceland, Thordardottir served as vice chair of Independent Party’s Youth Movement. “Years later, that’s how we met — through politics,” she said of her husband. “I had always known his name. He went to the United States for his education while I stayed home. He went to Brandeis and then to [the Johns Hopkins School of Advanced International Studies] for a master’s. That’s when he lived at the International Student House on R Street, NW. He got another master’s degree from the University of Minnesota.”

Haarde was recently honored, in fact, by the International Student House, a nonprofit that houses foreign students studying in D.C.

The ambassador and his wife are settling into Washington after a tumultuous period back home. The tail end of Haarde’s term as prime minister, which lasted from 2006 to 2009, was marked by the financial crisis that crippled Iceland’s banking sector, wiping out billions of dollars in savings. His party’s coalition resigned from power amid widespread protests. Haarde become a prominent casualty of the country’s economic collapse, becoming the first Icelandic minister to be indicted for misconduct in office related to the banking meltdown. Although he was convicted on one of the charges, he was cleared of the more serious charges and faced no punishment.

Haarde acknowledged some mistakes in the financial meltdown but said he was not solely responsible for a complex economic downturn. After serving for several years as an independent consultant, he took up his U.S. posting last February.

Since then, Thordardottir has taken advantage of her break from both motherhood and politics to learn more about Washington and enjoy some free time. 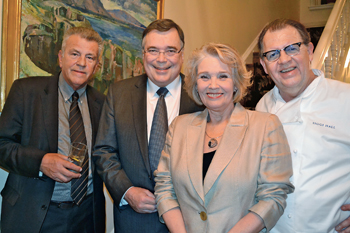 From left, producer of the Food and Fun Reykjavik Food Festival Baldvin Jónsson, Ambassador of Iceland Geir H. Haarde, his wife Inga Jona Thordardottir and chef Siggi Hall celebrate the festival’s 15th anniversary at a reception held at the Icelandic Residence in D.C.

“I enjoy being on my own. Here, I go alone to the golf course, think tank lectures and area museums,” she said. “I liked doing all sorts of sports when I was young. With the children, there was no time. Now that I have time, I’ve taken up golf. In fact, I was excited when I heard we were coming to Washington because there are good courses here and I’d have time. We’ve played in Florida, Virginia and at Haines Point. In Ireland, it’s an everyman’s sport and very popular. In Iceland, we have lots of golf courses at home but you have to be ready to go over rocks and over and around water.”

Born and raised in the port town of Akranes, Thordardottir was an hour away from Reykjavik by boat and two hours away by car. She especially appreciates the countryside and the ocean, which is not surprising considering that as a child, she used to go fishing with her father, the captain of a large commercial fishing boat.

Today, Thordardottir still goes salmon fly-fishing. “I was brought up with this. The season lasts from June to September,” she said, noting that she wears the iconic rubber boots and large rubber bib overalls. “You have to buy a license. That costs $100 and up, according to how popular and famous the river is.” Her biggest catch weighed nearly 12 pounds.

“I knew about ships and sailing — not the usual upbringing for a girl,” she joked.

Today, Thordardottir also enjoys hiking and going for long walks. “I love to be inside too. I like reading about history and contemporary issues. And I like to knit and needlepoint.”

Traveling is one of her favorite pastimes. She has visited almost 30 U.S. states, more than 50 countries and five continents. “When I was young, I traveled with a friend; our first trip was to the United States. I remember going to New York for 10 days. We came to Washington when I was 16 and saw all the memorials. I’ve been traveling all my life. I think islanders go abroad and see other places. We like it. Almost all Icelanders have a passport.”

“Washington has changed a lot in 48 years,” she said, recalling her first trip here as a teenager. “I have fond memories of seeing the Washington and Lincoln Memorials, Arlington National Cemetery and the cherry blossoms. I really enjoy Washington as a city. It is full of history and art. It’s nice to walk around in. It’s a dynamic city — bright and beautiful. It was my first experience overseas. I have traveled here many times since. It is so clean and beautiful and, now, safer.”

The experience is, of course, vastly different being a teenager and a diplomatic spouse. “Here, I am the wife of an ambassador. I am meeting people from all over and learn different cultures. Washington is embracing the diplomats who are coming here to serve. The [State Department] Protocol Office really makes you feel at home.”

Musing on the differences between politics and diplomacy, the former city council member noted that, “In politics, you speak for yourself or your constituents. In diplomacy, you are a spokesperson for your country and the government.”