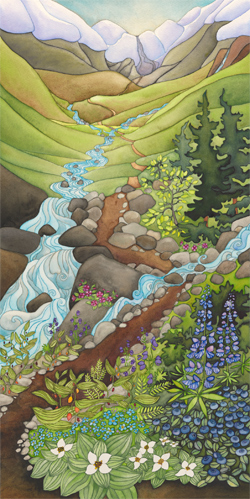 “Flora of the National Parks” at the U.S. Botanic Garden depicts the dazzling array of plant life found in American’s National Parks.

On any given day, whether it’s snowy or sunny outside, the U.S. Botanic Garden on the National Mall is a haven from the rigors of urban life. Now, a new exhibit in partnership with the National Park Service allows visitors to leave the city behind and step into an oasis filled with some of the most stunning natural wonders the United States has to offer.

Pieces by nearly 80 artists from across the U.S. were chosen from hundreds of entries and are complemented by live plant displays. The exhibit includes artwork representing flora from some of the country’s most well-known parks, including Rocky Mountain National Park in Colorado, Haleakala National Park in Hawaii, California’s Joshua Tree National Park and other giants. It also includes examples of flora in some lesser-known parks, like Homestead National Monument in Nebraska and Keweenaw National Historical Park in Michigan.

To many plant enthusiasts, flowers don’t need beautification. Stroll through a lush garden and it’s obvious that many plants stand on their own artistic merits. But by soliciting artists’ interpretations of flora, the Botanic Garden transformed both the exotic and mundane of plant life into something more intimate.

Take for instance Alaskan artist Stephanie Ryan’s interpretation of Alaska blueberry, or vaccinium ovalifolium, from the Chilkoot Trail in Klondike Gold Rush National Historical Park in Skagway, Alaska. I spent time in Skagway as a ranger at Klondike, wrote for the local paper and hiked the 35-mile trail along the old gold rush route into Canada on an admittedly long first date. Walking into the Botanic Garden and seeing Ryan’s work hanging on the wall had an almost visceral effect.

I reached Ryan via phone in the Yukon territory of Canada. She told me that she works on the Canadian side of the Chilkoot Trail, while her husband works on the American side. I asked her why, out of all the gorgeous vistas in Alaska, she had chosen to paint blueberries.

“The landscape itself is pretty stunning, and it’s easy to miss the little things along the way,” she said. “I notice what happens on the trail because I go through there every day and I see it changing day to day.” 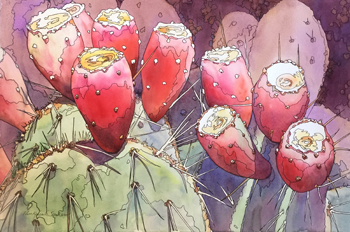 She pointed out that blueberries, which grow in abundance along the trail, have long been a means of sustenance and a cultural symbol for the indigenous people in the area.

Susan Pell, science and public programs manager at the U.S. Botanic Garden, said the exhibit is not only beautiful but also informative. “Understanding which plants we have across America helps us protect them,” she said.

But it goes much further than that. Plants are bellwethers. How and why they appear, the geographic areas in which they thrive or wither, how they adapt to changing weather patterns and drought conditions, and what they tell us about soil health serve as tremendous resources in understanding the terrain on which we all live, even as that terrain continues to change.

And yes, many are also pretty to look at.

Devin Dotson, public affairs and exhibits specialist at the Botanic Garden, said that the impetus behind the show is to connect people to the places they’ve been, and the places they want to go. 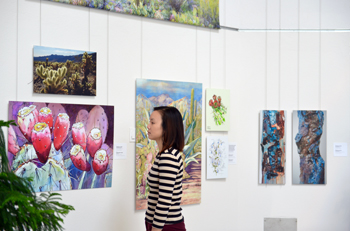 “These artists have depicted some of the most iconic parks in America, and in many cases, it’s because they grew up around these places and experienced the flora they’ve portrayed in a very familiar way,” Dotson said. “People viewing this art are not only reminded of places they’ve been, but in some ways, the exhibit is also aspirational. We want visitors to leave the exhibit and feel as though they need to go experience it for themselves.”

Many people may never see the parks showcased in the exhibit or if they do, they may never venture past the introductory walking trails into the heart of the parks where such flora flourishes. So here is my challenge to you. Go to the exhibit. Select one piece of art representing one type of plant in one national park. And then, go there.

It doesn’t have to be a long journey: C&O Canal, Harpers Ferry, Great Falls and other local parks are featured in the exhibit. Or choose one further away, like Olympic National Park in Washington State, Denali in Alaska or even my old park, Klondike (easily accessible by cruise ships, ferries and float planes).

Barring that, stay in place but vow to learn everything you can about the plant you’ve chosen. Become an expert on the yellow necklacepod of Biscayne National Park or the ghost orchid of the Everglades. Learn the difference between the coast redwood tree and the iconic giant sequoia. The Botanic Garden is hosting a variety of lectures and workshops throughout October, including meet-and-greets with the artists.

While there, also visit the recently opened Mediterranean room, the first new permanent conservatory room since 2001, which will feature the vibrant diversity of plants found in the world’s five Mediterranean climates.

Flora of the National Parks

Molly McCluskey (@MollyEMcCluskey) is a contributing writer for The Washington Diplomat and a former National Park ranger.