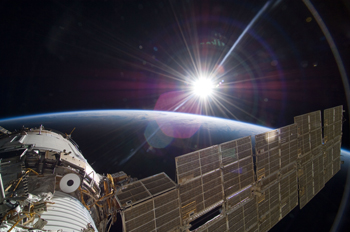 China and Russia may not be America’s preferred partners when international relations are at play, but both countries have proven invaluable allies when it comes to issues slightly out of this world — in space.

A bright sunrise greets the International Space Station in this scene from the Russian section of the orbital outpost.

The National Aeronautics and Space Administration (NASA) is not only behind the first steps mankind took on the moon, but it is also behind a number of “giant steps here on Earth,” according to NASA Administrator Charles F. Bolden Jr.

NASA’s use of “soft and smart power” has led to myriad international partnerships between the United States and a number of other countries, including Russia and China, which in many foreign policy arenas are considered rivals or antagonists.

But in space collaboration, the United States can take “global leadership by example and action,” said Bolden, a former astronaut and retired major general in the Marine Corps who spoke at the Center for Strategic and International Studies (CSIS) in late April.

When the United States landed on the moon in 1969, it did so almost entirely on its own, according to Bolden. Future forays into space, however, will require cooperation and coordination among many countries.

Bolden, who was nominated by President Obama to head the U.S. space agency in 2009, quoted the president when he stressed that NASA “will not only extend humanity’s reach into space, we will strengthen America’s leadership here on Earth.”

Bolden said Obama has set a goal for NASA to reach Mars by the 2030s and land on an asteroid by 2025. To do that, “it does not make sense for one country to build every instrument, launch every satellite or conduct every research experiment,” Bolden said, noting that NASA has roughly 700 agreements with more than 120 international partners.

Japan, China, Germany and India are just some of the major economic powers contributing to the study and observation of the planet. Bolden said that “all sides of the political spectrum” are represented.

In particular, he cited the diplomatic benefits of the International Space Station (ISS), a microgravity lab launched in 2000 that has an international crew of six people who orbit the Earth every 90 minutes.

“Today, a child who is 15 years old or younger has lived every day of his or her life while human beings from multiple countries are living and working together in space aboard the International Space Station,” Bolden pointed out. “Tens of thousands of people from across 15 countries have been involved in its operation. Astronauts from 18 countries have spent time on board. It has hosted 1,700 investigations from researchers in more than 83 countries.”

He added: “I truly believe it ought to be considered for the Nobel Peace Prize.”

Bolden noted that American astronaut Scott Kelly and Russian cosmonaut Mikhail Kornienko recently returned from a year of living together on board the ISS. “This at a time when sometimes the relationship between their two home countries back here on Earth presented incredible challenges.”

“[The U.S. shares] a common mission with Russia,” Bolden told the CSIS crowd. “Both [American and Russian] leaders have a belief in the critical importance of the International Space Station.” 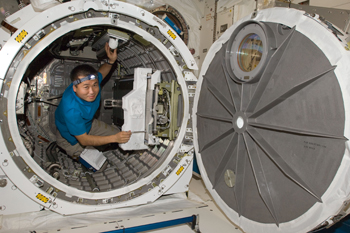 Kibō (which is Japanese for “hope”) is the largest single module on the International Space Station and is used to carry out research in space medicine, biology and other areas.

Bolden said that cooperation can be traced back to the height of the Cold War with the launch of the Apollo Soyuz, the first joint U.S.-Soviet space flight in 1975 that served as a symbol of détente between the two superpowers.

Bolden, who traveled to space four times between 1986 and 1994, said the Apollo Soyuz mission represented the type of confidence-building measures that could be applied to China today, another economic and geopolitical rival that is seen as a potential ally for NASA.

However, the Marine Corps veteran was careful to distinguish between military and civilian space cooperation. On the military front, the Pentagon remains wary of Beijing’s ambitious space program, which could challenge America’s uncontested dominance in space and result in a new era of modern warfare — one that targets satellites responsible for guiding bombs and spying on adversaries. On the civilian front, Bolden said China is a “potential partner.” He noted, for instance, that NASA already works with the Chinese on analyzing the glacial makeup of the Himalayas and researching the causes of earthquakes.

He said the mere act of reaching out to potential space partners might alleviate tensions in other areas. “Having spent 34 years in the Marine Corps, I can’t think of a nation that we haven’t talked to. We talk to some pretty bad people from time to time because we have to … sometimes it works, sometimes it doesn’t,” he said. “But I think that if you talk to anybody in the military, most of them will tell you that engagement always beats isolation.”

As NASA collaborates with more nations, “the pool of stakeholders expands, creating a powerful source of stability,” Bolden said. “The International Space Station is one of many examples of working with other countries.”

In addition, the NASA administrator outlined the practical applications of space technology, ranging from home insulation to GPS satellite navigation (though, Bolden quipped, NASA is not responsible for the development of two iconic products often credited to the agency: Velcro and Tang).

NASA-developed technology “has not only sent us stunning pictures of places like Mars and Pluto, it beamed nightly television into our homes and improves the eyeglasses many of us like me wear,” Bolden explained. “Technologies we developed to recycle wastewater aboard the International Space Station are being put to use to provide our global neighbors in remote parts of Asia and South and Central America with clean drinking water, not to mention some parts of our own country.”

Among the other technologies that have found their way into the private sector are machines that listen for beating hearts below rubble and portable ultrasound machines that evaluate ailments and are used in remote regions where doctors aren’t always available.

Bolden said NASA is working with other governments to develop their respective space programs, “talking with nations that are just beginning to understand how space exploration might have a profound benefit on their citizens’ daily lives.”

But as space programs grow and more countries send their astronauts into orbit, the more crowded space becomes.

“Space is on the verge of being more contested, congested and competitive,” Bolden said, adding that NASA is working with the international community to develop methods for dealing with orbital traffic management and debris mitigation. 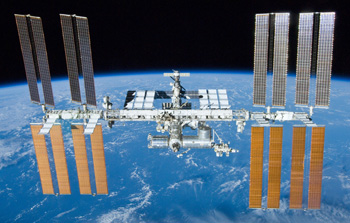 A rearward view of the International Space Station is seen against the backdrop of Earth. Pictured are the station’s four large, gold-colored solar array wings, two on either side of the station, mounted to a central truss structure.

Bolden lamented that the world community has yet to establish a set of international norms to guide 21st-century space exploration. While America’s forays into space helped set many of the principles we see today, Bolden emphasized that there are certain things that the U.S. cannot do. This gray area will have to be negotiated by some sort of international body, like the United Nations and its Committee on the Peaceful Uses of Outer Space (COPUOS).

“The U.N. can try to promote norms,” said Bolden, listing issues like the use of weapons in space and the removal of orbital debris.

The commercialization of space is another area that a growing number of countries must navigate, with companies like SpaceX and Virgin planning to send tourists to outer space in the coming years. Bolden hopes that international partners will help the industry strengthen and create space markets, something that could bode well for future NASA missions.

“NASA’s journey to Mars [is something we will] take together with our partners in industry,” he said.

While the United States seeks to push greater international cooperation on the one hand, it is also looking to boost its own space fortunes at home. For example, while Russia relies on Americans to operate the International Space Station, the U.S. relies on Russia to ferry crew and cargo to the station — a dependence U.S. businesses are hoping to phase out.

“We’re poised to end our sole reliance on Russia to get our astronauts to space. Our American commercial partners, Boeing and SpaceX, are close to being ready to take our astronauts to the International Space Station, allowing NASA to support job creation right here in the U.S.A,” Bolden said. “The president’s strategy was to use these initiatives to build a commercial space market in lower orbit, strengthening America’s competitiveness in the global innovation economy,” he added, noting that NASA works with nearly 1,000 companies in all 50 U.S. states.

While nations will continue to try to one-up each other in their quest to conquer new frontiers in space, the domain is no longer about competition, as it was during the Cold War, but rather about cooperation, according to Bolden.

“We are no longer in a space race against each other,” he said. “Rather, we’re traveling together as a human race that’s looking to expand the outer bounds of human possibility and progress.”

Justin Salhani (@JustinSalhani) is a contributing writer for The Washington Diplomat. Anna Gawel is the managing editor.