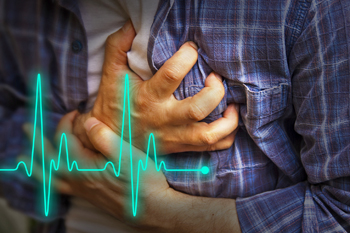 Without typical symptoms, many miss out on crucial medical care, experts say

As many as half of all heart attacks may be “silent” — without the typical crushing chest pain, shortness of breath and cold sweats, new study findings suggest.

Among nearly 9,500 Americans included in the study, 45 percent of all heart attacks were silent, investigators found. And, the study authors said, these silent heart attacks triple the odds of dying from heart disease.

“Silent heart attacks are almost as common as heart attacks with symptoms and just as bad,” said senior study author Dr. Elsayed Soliman. He is director of the epidemiological cardiology research center at Wake Forest School of Medicine in Winston-Salem, N.C.

Symptoms of a silent heart attack are so mild they’re barely noticed, if at all, Soliman said. Most are discovered accidentally, with damage showing up on an electrocardiogram (EKG) given during a regular exam or before surgery, he said.

According to Dr. Suzanne Steinbaum, director of women’s heart health at Lenox Hill Hospital in New York City, “When heart attacks are silent, people are less likely to get treatment. And that’s been a problem with women. Symptoms are sometimes more subtle than the crushing chest pain.”

Although silent heart attacks are more common among men, they are deadlier for women and perhaps black people, the study findings indicated.

Steinbaum, who was not involved with the study, said that people should not dismiss symptoms such as fatigue, nausea or shortness of breath that occur when exercising or running errands but that go away when resting.

“These subtle symptoms might be your heart and should not be ignored — you should seek out a doctor’s care,” she said.

“I tell all women that you need to take a close look at your risk factors for heart disease,” Steinbaum added.

The researchers said there were too few black patients in the study to know for certain if they fared worse than whites, although it appears that way.

A patient who has had a silent heart attack must be treated aggressively, Soliman said. Treatment includes controlling high blood pressure and cholesterol, and possibly modifying behavior.

Patients who have a little chest pain plus risk factors for heart attacks — such as high blood pressure, obesity or diabetes — should have an EKG “not only to see if they have had a heart attack, but also for prevention of outcomes that can happen later,” he advised.

Findings of a prior heart attack should not be taken lightly, Soliman added.

For the study, Soliman and his colleagues collected data on middle-age men and women who took part in a study assessing the causes and outcomes of hardening of the arteries (atherosclerosis). It was conducted in four U.S. communities.

Over roughly nine years of follow-up, 317 participants had silent heart attacks and 386 had heart attacks with classic symptoms. Deaths were tracked for more than 20 years.

The researchers accounted for factors such as smoking, weight, diabetes, high blood pressure and cholesterol. They also took into account income and education, which could affect access to care.

The investigators found that risk of death from all causes increased 34 percent after a silent heart attack.

Dr. Andrew Freeman, director of clinical cardiology at National Jewish Health in Denver, said, “I don’t think that people really understood the incidence of silent heart attack.” Freeman is also a spokesman for the American College of Cardiology.

“In a country where the diet and exercise patterns are not ideal, there may be a lot of folks we may never come in contact with who may have this problem,” he said.

Freeman suggested that doctors need to put more effort into prevention. “Doctors spend very little time talking to patients about diet and exercise,” he said. “Every doctor visit should have some component of prevention.”

The report was published online May 16 in the journal Circulation.

For more information, visit the American Heart Association at www.heart.org.