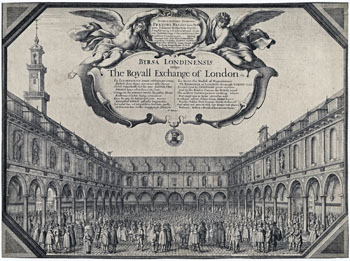 By now, we all think we know London, whose image has been splashed across our TV screens for the Summer Olympics (not to mention a certain royal wedding and recent jubilee). We also probably think we have a good sense of the city’s past, crammed full with the delights of English literature and history — thanks to figures such as Charles Dickens and Shakespeare, shows such as “The Tudors,” and the various on-screen reincarnations of the revered Elizabeth I of England.

London is as familiar as Washington.

So when you see “Open City: London, 1500-1700,” the wide-ranging, highly characteristic exhibition at the Folger Shakespeare Library, you might expect to feel right at home. Well, you might not.

Expect the unexpected when you travel through this 200-year saga of London, a medieval city that evolved into an emerging modern metropolis. It’s a journey that whisks you through the reigns of Henry VIII up to William and Mary, as Great Britain stood poised to become a global empire. Along the way, there were plagues and natural disasters, civil war, religious clashes, royal overthrows and economic upheaval.

But this is not an exhibition about the lives of great monarchs, or even great men and women. There were 15 royal rulers during this period in England, along with famous courtiers, explorers, political men and families of immense power, but on the whole, kings, queens and generals don’t get much of a mention in this show. 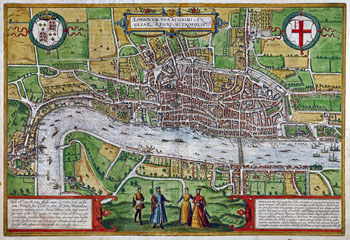 “Open City” is, as its title implies, about the transformation of a city, how it changed and outgrew itself in physical size, nature, outlook, function and population. Significant historical events figure strongly here: Henry VIII, in pursuit of a divorce, broke from the Catholic Church, took over the country’s monasteries, and forever changed the religious character of the city. A Richard Cromwell-led parliament sparked a civil war that ended in regicide and also forever altered life in the city. And the twin disasters of a killer plague and a tremendous fire all but destroyed the London, which was revitalized in the destruction’s aftermath.

“Open City” is ultimately about a place and the places within in it — neighborhoods, markets, churches, theaters and homes. It’s also about the people in those places — playwrights, artists, architects, clergymen, salesman, farmers and government officials — and how their lives changed with the physical and historic changes in the city.

The exhibit is also very characteristic of the Folger itself. Visitors go down two sides of a dark-brown hall and peruse books, manuscripts, paintings, drawings and, in this case, maps and schematics. The Folger is, after all, a library.

Old and musky as much of the material may be in its archaic forms of spelling and writing, it contains a vivid authenticity and an odd vitality. Drawings that are acutely accurate and panoramic are also touched by imagination and attitude. The 200 years contained in these books, letters and pamphlets represent the first true explosion of mass communication, beginning with the revolutionary printings of the Bible. 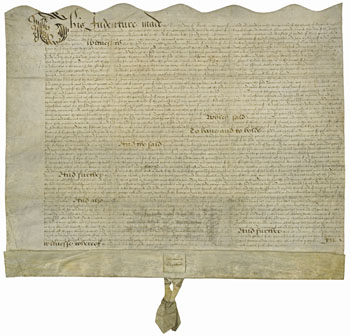 Here, we also see the beginnings of the first outdoor theaters. We see how Henry VIII’s appropriation of the city’s (and country’s) monasteries upended the function of Blackfriars precinct, a walled monastery that was converted into a commercial enterprise. The proof: a deed signed by none other than William Shakespeare, who lived in a townhouse on the former monastery site during his retirement.

There are depictions of the aptly and charmingly named market district called Cheapside, theater programs for “Pericles” and Ben Jonson plays, a chart showing the pew assignments for members of a London church, revealing their social hierarchy, and a map by Wenceslaus Hollar that shows the burgeoning city like a work of art, depicting many of the buildings that two decades later were engulfed by the Great Fire.

But the city rebuilt and pressed on. This exhibition traverses that rocky path, from destruction to gentrification to global pre-eminence. It not only chronicles the growth of a city and its people, but also the progress and perseverance that has left a lasting imprint on who we are today.

“All of these changes — to economic competition, to capital, to religion not being imposed by the state, to reining in the power of monarchs — are changes that have defined our world today,” said exhibit curator Kathleen Lynch. “So much of the way we operate in Western democracies is due to the rules of the game established in this period.”