Home The Washington Diplomat May 2012 For Mother’s Day, Doctors Advise Women to Take Exercise to Heart 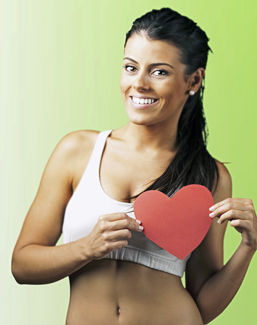 How much “moderate to vigorous” exercise do you get a day? According to new research, if you’re an average woman, you get about 18 minutes, compared with 30 minutes for men. That relative inactivity puts women at an increased risk for a nasty constellation of factors known as the “metabolic syndrome,” including high blood pressure, high cholesterol and excess weight around the waistline. In turn, the metabolic syndrome boosts your risk of life-threatening conditions like type 2 diabetes, stroke and heart disease.

In a study published March 31 online in the journal Preventive Medicine, researchers from Oregon State University in Corvallis reported the results of a national study of physical activity, depression and other symptoms in more than 1,000 men and women, using data collected between 2005 and 2006 as part of the well-known National Health and Nutrition Examination Survey (NHANES).

Although women in the study tended to take better care of their health overall — they smoked at lower rates than men, for example — their relative lack of activity really boosted their disease risk. Just over one out of every three women in the study had metabolic syndrome.

Women who do squeeze in the recommended amount of exercise most of the time tend to benefit from their activity even more than men, the researchers found. “The results indicate that regular physical activity participation was associated with positive health outcomes for both men and women; however, there was a greater strength of association for women,” said coauthor Paul Loprinzi, now an assistant professor of exercise science at Bellarmine University in Louisville, Kentucky.

Why aren’t women exercising more? The researchers didn’t specifically study that question, but they point to a tendency for parents to encourage more outdoor play in boys than girls, perhaps setting a pattern for life. Women also still tend to have more childcare responsibilities than men do, so it would be interesting to break down the survey data according to how many children the participants had. I’d say it’s a fair bet that the childless women get a lot more exercise than the women with kids. I’m sure the dads get less exercise than childfree guys as well, but would there be as much difference between the two?

Women should be particularly concerned about their elevated risk for metabolic syndrome because of what cardiovascular disease means to them. Many women are still more afraid of breast cancer than heart disease, but the fact is that heart disease is the leading killer of women in the United States — taking 10 times as many lives as breast cancer, and actually killing more women than all forms of cancer combined.

Women also do not recover from heart attacks as well as men do. Women under 50 are about twice as likely as men to die following a heart attack. And women are almost two times as likely as men to die after bypass surgery. They’re also less likely to receive certain vital therapeutic interventions, like angioplasty, aspirin therapy and cardiac stents.

With that dire outlook, it’s obvious that women need to work harder at preventing heart disease in the first place. And with Mother’s Day coming up this month, give yourself — and your family — the gift of your own good health. So moms, celebrate Mother’s Day by going out and playing with your kids — and I mean play! No watching from the sidelines allowed. Run around the playground until you’re panting. Take them for a bike ride. Pursue a seriously competitive game of jump rope. You’re not only doing yourself a healthy favor, you’re setting your children on a better path for life.

The American Heart Association recommends that all women should know their heart numbers, the key measurements of whether things like your cholesterol and blood pressure are in a healthy range or putting you at high heart disease risk. Next time you visit your doctor, make sure you get these checked:

You can also get age-specific heart health guidelines for women from the American Heart Association online at www.goredforwomen.org/heart_healthy_at_any_age.aspx.