More than 70 embassies are participating in this year’s Passport DC, which in addition to embassy open houses will feature a global marketplace at the National Museum of Women in the Arts, the Meridian International Children’s Festival, and the National Asian Heritage Fiesta Asia Street Fair.

Passport DC is not just about embassies anymore. Although the open house tours remain the highlight of the month-long cultural celebration, its popularity has helped Passport expand beyond its first iteration to include museum exhibits, street festivals and children’s activities. Still, the original goal is far from forgotten with record participation from about 70 of Washington’s 170 embassies.

In addition, the wide-ranging culture that is showcased is anything but formulaic.

“There’s this really fun juxtaposition of what we think about as international oftentimes being traditional or folk, but what we see with all of this is a lot of the exhibits and concerts and so forth are bringing forward very contemporary art and new trends and new activities,” said Linda Donavan Harper, executive director of Cultural Tourism DC, which puts together Passport DC. “You shouldn’t think about it as what a country has been, but what a country is becoming or doing now as well.”

This year marks the fifth anniversary of Cultural Tourism DC’s citywide extravaganza of international culture, which kicks off with the Around the World Embassy Tour on May 5, featuring more than 40 embassies opening their doors to the public. Past offerings have included karate demonstrations, sari-wrapping lessons, henna applications and wine tastings.

Other mainstays of Passport DC include Short Cut to Europe: European Union Embassies’ Open House on May 12, the Meridian International Children’s Festival on May 9, and the National Asian Heritage Festival: Fiesta Asia Street Fair on May 19.

A new signature event is also joining the kickoff lineup this year: The National Museum of Women in the Arts’ Global Market Place on May 13 and 14 that blends shopping and art with an array of products — jewelry, textiles and baskets, for instance — created by women in countries where they seek financial independence and security, such as Turkey, Nepal, Brazil, Rwanda and Guatemala. The pieces will range in cost from $15 to $150.

During the marketplace, the museum will host presentations, lectures and panel discussions that focus on women in these emerging countries and the changes happening in their lives. Additionally, the museum’s “Royalists to Romantics: Women Artists from the Louvre, Versailles, and Other French National Collections” exhibition focusing on French women artists from 1750 to 1850 further ties into Passport’s international theme. 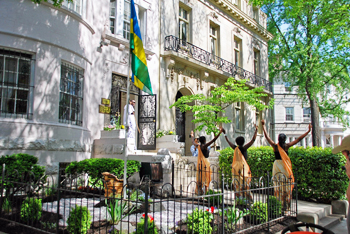 “The museum is celebrating our 25th anniversary in 2012, and we wanted to spread the celebration throughout the city,” said Michelle Cragle, the museum’s marketing and media relations manager. “We’ve been a partner with Passport DC and Cultural Tourism DC for the past five years, and so this is really a natural partnership for us because we would be participating anyway because we have an exhibition of French women artists.”

Part of Cultural Tourism DC’s mission is to highlight the work of the National Museum of Women in the Arts and other city attractions that tend to fly under the radar. The nonprofit coalition is home to more than 230 culture, heritage and community-based organizations whose members try to expose residents and visitors to the nation’s capital beyond the National Mall — and that of course includes the city’s thriving embassy community.

Passport DC is in fact based on the European Union’s Open House, which was first held by the EU member states’ embassies in 2007 and then absorbed into Passport DC when it started in 2008. In its first two years, Passport DC encompassed only the first two weeks of May with three events that attracted 28 embassies. In 2010, it expanded to be a month long and took on more than 100 smaller international events. This year, happenings will take place on Saturday and Sunday to create full weekends of activity. In fact, D.C. Mayor Vincent Gray has declared May “International Cultural Awareness Month.”

“We want to promote our country to visitors, to people who live in D.C. or are visiting D.C. so they can know who we are and what we have to offer,” said Kendall Belisle, first secretary of the Embassy of Belize, another newcomer. “One of the main objectives of any diplomatic mission is to promote the country. So, we thought this would be a really good opportunity to be able to do that.”

The embassy will offer traditional Belizean food such as rice and beans, chicken, and potato salad, she said. Local folk music will provide the backdrop.

“I think what we want people to take away from this is that we’re a multicultural society, there are different ethnic groups, but we’re well blended,” Belisle explained. “Everyone is well assimilated and we’re a peaceful democratic country and we are very environmentally friendly. We have a keen interest in conserving the environment. We do have the second largest barrier coral reef in the world.” 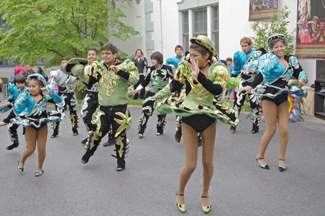 Harper attributes the rise in embassy participation to Passport’s history and persistence in developing the event.

“This is something that doesn’t happen anywhere else in the world, and the first few years, we were trying to explain to people what it was and how it worked and how to get involved,” she said. “I think now people have seen it and they appreciate it.”

“We’ll never have them all,” Harper added of the embassies (some cannot participate for security or space reasons). “We actually like having new ones come in and out every year because it keeps it fresh for people who come every year.”

For past coverage of Passport DC in The Washington Diplomat, see “Passport Renews Its Washington Around-the-World Tour” in the May 2011 issue and “Jam-Packed Passport: Itinerary Expands for This Year’s Citywide International Showcase” in the May 2010 issue.