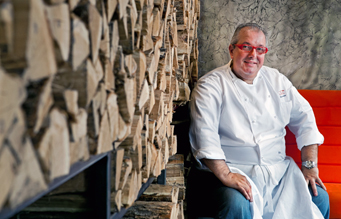 One of D.C.’s most talked-about chefs, Roberto Donna returns to the kitchen at La Forchetta, an Italian trattoria managed by Hakan Ilhan, the businessman behind successful local fast food ventures such as Einstein Bros. Bagels.

The much-acclaimed and much-talked-about chef Roberto Donna has returned, once again, to Washington, D.C. Joining forces with Hakan Ilhan, a highly successful local restaurateur, Donna has taken the executive chef role at La Forchetta, an Italian trattoria in the Spring Valley neighborhood on the edge of American University’s campus.

When Donna left the area after Galileo III, his highly touted comeback venture, shuttered last fall amid widely reported legal and financial troubles, it looked like it would finally be the end of an era marked by incredible highs and lows. A protégé and partner of iconic chef Jean-Louis Palladin, Donna himself was responsible for developing many of the area’s top chefs in his various kitchens.

Donna’s biography reads like a history of the evolution of Washington dining, his growth as a chef paralleling the increasing quality of restaurants in the nation’s capital. In 1984, less than five years after arriving in Washington (at the age of 19) to seek his fortunes, Donna opened Galileo with partner Savino Racine to almost instant critical acclaim. The James Beard Award winner went on to open or lead many of the city’s best Italian restaurants, at one time having 11 establishments with nearly 500 staff under his belt.

Then the empire collapsed. Donna may be an exceptional chef, but he was also exceptionally bad at business apparently. A litany of lawsuits and court appearances stemming from bounced employee paychecks all the way up to felony embezzlement brought the man whom Washington Post dining critic Phyllis Richman called “a national treasure” crashing down, with the debt from three cases alone totaling more than $1 million.

Galileo III, a reincarnation of his flagship hit Galileo and Laboratorio del Galileo, was meant to resurrect the battered chef’s career in 2010, but only a year later, it too drowned under the weight of financial complaints from fed-up landlords, waiters, bartenders and high-profile chefs (the widely anticipated restaurant was sued even before it officially opened).

“It’s a grim legal reality that runs counter to the image of a humble, hard-working chef trying to make amends for past sins. Or trying to reclaim past glories,” wrote the Washington Post’s Tim Carman in “The reduction of Roberto Donna” last year. “The circumstances would seem to echo similar events that led to the downfall of Bebo Trattoria, Donna’s restaurant in Crystal City, which closed in April 2009 amid a rent default of $500,000 and a federal lawsuit alleging labor and wage violations.”

Can Donna make yet another comeback, showcasing his famous talent without unleashing the bad business habits that made him infamous? La Forchetta may hold the key.

La Forchetta is a new type of venture for both Roberto Donna and Hakan Ilhan that has them meeting in the middle. Ilhan, noted for his success in local fast food ventures such as Einstein Bros. Bagels, is branching out into more upscale terrain with the opening of La Forchetta. Donna, a celebrity chef with a raft of awards to his name, will be trying his hand at a more casual setting.

Ilhan tapped Norris Design in Atlanta to transform the former Balducci’s space into an American version of the trattorias found in large urban centers in Italy. The look is sleek, with a basic white, black, and gray color scheme accented with splashes of orange in the seating and panels. Steel racks for the wood and wine bottles and exposed ductwork add an industrial dimension.

Working with the open kitchen concept, the space is broken into sections by a pizza oven island in the center and a demonstration kitchen along the side, set off from the main dining area by a wall of openwork panels that sport concrete counter tops and fixed stools, giving diners front-row seats to the Donna show. Lighting, which is just right though some have complained it’s too harsh, comes from a series of interesting black crystal chandeliers, pendant lamps and track lights. 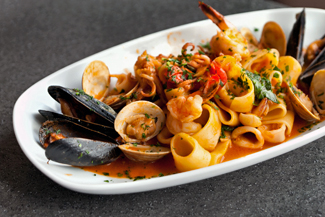 Donna’s opening menu for La Forchetta is expansive, offering diners samplings of his signature dishes as well as new variations on familiar themes. The house-made pastas and risottos demonstrate that the chef’s brief sojourn in the southwest has not dimmed his enthusiasm for classically prepared dishes. The pasta pillows filled with ricotta, spinach and mascarpone cheese are nothing short of superb and rival anything prepared at Galileo. The meat version, Agnolotti “Gobbi” all’Astigiana, filled with roasted veal, pork and sausage and tossed in butter, sage, roast jus and parmesan cheese is heavier but equally delicious. The Calamarata pasta with seafood is another hearty dish. Thick rings of pasta that look like oversize squid are served with squid, shrimp and mussels, seasoned with cherry tomatoes, garlic and basil.

Risotto offers diners another glimpse of Donna’s immense talents. One version with shrimp, cuttlefish, zucchini, saffron and sun-dried tomatoes is sharply flavored and reminiscent of classic Spanish paella. Gorgonzola dolce, pistachio and parmesan cheese combine for a richer and milder option. The fresh asparagus and asparagus puree risotto will be even better as we move into asparagus season and the vegetable can be obtained locally.

La Forchetta’s menu also includes an excellent selection of hot and cold small plates that can be purchased individually and in samplings of three or six (a better bargain), as well as a collection of distinctive soups and salads. Encompassing vegetarian, fish and meat dishes, many of these classic Italian combinations embody the beauty of simplicity with their limited ingredients and straightforward preparations. Sicilian eggplant caponata with olives and capers is a bit sweeter than one might expect, while the charred roasted peppers dressed with capers and anchovies have a salty kick. Long slices of zucchini marinated with garlic, mint and vinegar served with fresh mozzarella are tasty but a tad oily. Complemented with grilled bread and olive oil, the cod mantecato — salt cod beaten with olive oil until an almost creamy paste — tastes far more complicated than it actually is. For those who prefer milder fish flavors, the salad of white bean and tuna with slivers of red onion, vinegar and salt is a good choice.

Warm roasted dates stuffed with a sweet gorgonzola, wrapped in pancetta and dressed with honey and balsamic vinegar is a standout among the warm plates — as is the mild but rich parmesan cheese pudding with stracciatella topped with crunchy fried shallots. Short logs of fried polenta with stracchino cheese are bland yet appealing. The soft polenta, functioning as a base for sautéed shrimp and spicy lemon jus, shows us just how versatile this corn dish can be. A fried egg over tomato and bruschetta accompanied with rich burrata cheese and salty bottarga is a perfectly satisfying combination that would enliven any brunch.

Donna has selected several main dishes to round out the casual but deftly crafted menu, offering Cornish hen, beef short ribs, beef hanger steak, veal skirt steak, pork shank, veal scaloppini and house-made sausages. Each is prepared simply to let the basic flavors stand out. The luganega sausage, a Northern Italian specialty of veal and pork grilled with potato and rosemary, is particularly striking, as is the hanger steak marinated in red chili, garlic and olive oil so that it’s tender enough to cut with a fork.

Ilhan is positioning La Forchetta to rival 2Amys as the best pizza joint in town. And Ilhan knows pizza. He is the brainchild behind Pizza Autentica, a fast-casual pizza chain that sells the pie by the slice, along with strombolis, paninis and gelato in venues also designed by Norris Design studio. Ilhan’s chain is more upscale than most other similar spots, but La Forchetta brings the concept to a very different level, offering many of the characteristics of a fine dining establishment but in an appealingly casual setting. 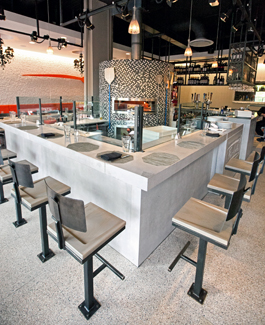 A handsomely tiled wood-burning pizza oven sits in an island at the center of La Forchetta. Bar seating gives diners a ring-side seat from which to watch pizzaiolo Panetta Giuseppe build his pies. The oven is not the only weapon in the arsenal. Ilhan and Donna have brought in state-of the-art equipment including a Pietro Berto dough mixer from Italy that kneads 50 pounds of flour at once. Donna credits the consistency of the light, airy crust to the machine.

Cooked at 700 degrees until the crust is slightly charred and dressed in a dozen different guises, the pizzas at La Forchetta offer a nice range of flavors — from classic combinations such as marinara with tomato, garlic, olive oil and oregano, to complex and unusual varieties such as fennel and bottarga with tomato, pecorino, mozzarella and grey mullet roe. The quattro stagioni featuring fresh tomato, mozzarella, basil, oregano, olives, mushrooms, artichokes and ham is particularly delicious.

Donna has put together a nice collection of sweets to finish off the menu. The dome-shaped tiramisu served with a demitasse of hot chocolate and caramelized hazelnut is among the very best in the area. Bombolini, small and surprisingly light fried dough balls rolled in lemon sugar and served with hot chocolate sauce for dipping, simply redefine fried bread. Perhaps the most interesting yet lightest of the desserts is the Coppa Rinfrescante. A tart and slightly grainy lemon apricot sorbet topped with a mound of freshly whipped cream, it is served over poached apricots and almonds with a pizzella wafer.

And if you didn’t have pizza as part of the meal, there are several sweet varieties including a delightful pear, ricotta cheese, almond paste and chocolate concoction, as well as pineapple and orange marmalade versions topped with crumbled savoiardi cookies. There is also a heavenly but dense calzone filled with Nutella and banana.

Ilhan has made some interesting choices in staffing la Forchetta — and not only in bringing Donna back into the kitchen. Eric Felten, a cocktail historian and James Beard Award winner for drinks, has been tapped to create the cocktail list. A culture columnist for the Wall Street Journal and author of “How’s Your Drink?: Cocktails, Culture and the Art of Drinking Well,” Felten has never created a cocktail list for a restaurant. His initial offerings include American-style cocktails made with distinctly Italian ingredients such as grappa, Averna Amaro (a liqueur made of herbs, roots and spices) and Cocchi Americano (a bitter-sweet Italian aperitif wine).

As with all new restaurants, there are still some kinks to be worked out. The front of the house is not yet functioning as smoothly as one might expect. Most of the wait staff is knowledgeable and eager to discuss the menu, but do not consistently manage the timing of dishes that well — all issues that can easily be remedied.

And with Donna strictly behind the kitchen and Ilhan managing the business side of the endeavor, La Forchetta may finally be the accomplished chef’s recipe for renewed success, albeit on a more modest scale. While Donna may have had serious difficulties running restaurants, his abilities in the kitchen have never been in doubt. Collaborating with Ilhan will allow him to focus on what he does best. Ilhan, on the other hand, has proven himself an adept businessman with the success of his other 21 eateries.

And because La Forchetta offers a comprehensive menu in the mid-price range, Washingtonians now have a unique opportunity to taste some of the genius that has marked Donna’s culinary career of extreme highs and lows — with the pendulum perhaps swinging back to the high side thanks to a low-key pizza joint.